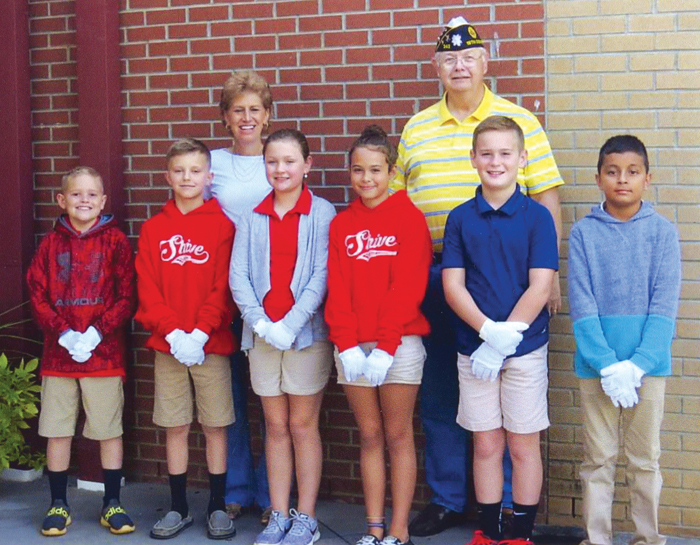 When does a legacy begin?
By Bob Price, American Legion Post 342

When you think about a legacy at a school, your mind usually turns to athletic or academic performances by high school or college students. But how often do with think of fourth and fifth graders at an elementary school as having a legacy to pass on?

Six years ago at a Veterans Day celebration, I was approached by Zebbie Bondurant, principal of Shive Elementary, seeking help with a program at her school. A grandparent picking up their grandchild from school was taken aback by the inappropriate way the students handled the flags they had retrieved that day as school was being dismissed.

Since that time to this, teachers select six students who will make up the current year’s Flag Patrol.

The students look at being selected as a big honor and work hard to learn their drills. This year’s patrol is made up Brinley Williams, Maddison Schenk, Colin Quick, Cesar Ramos Diaz, Jackson Thrasher and Colton Heald.

Only a few weeks ago not one of them had handled a flag, and today they work like a team of veterans. They are each learning to handle all the positions on the team. When President Trump issued a proclamation that the nation’s flags be flown at half-mast for that day, the team performed the special ceremony without a hitch.

They form up in single file and march to the flag pole. On command they take their positions and once both the American and the North Carolina flags are attached, they are raised to the top of the pole. The procedure is reversed at the end of the school day and with the flags properly folded, they re-form their detail and march back to the school. The flags are secured in the office until the next morning.

Although only a few weeks old, this year’s Flag Patrol has already raised the bar, and the legacy continues.