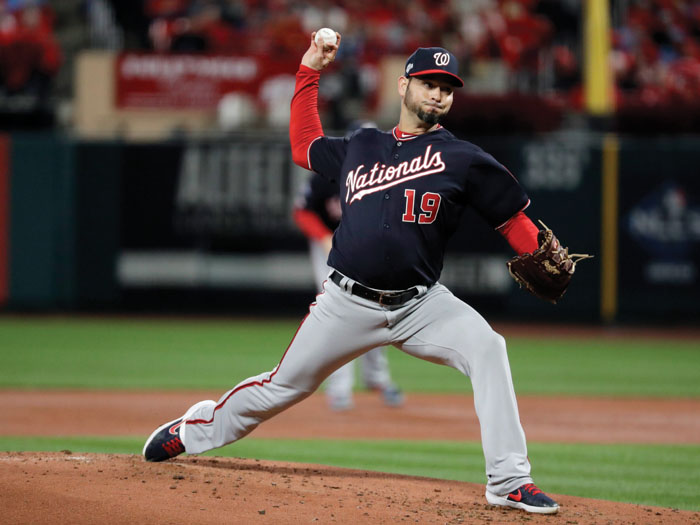 By JAY COHEN AP Sports Writer
ST. LOUIS (AP) — It turns out Washington’s Big Three is a Big Four.
Don’t forget about Aníbal Sánchez.
The right-hander carried a no-hit bid into the eighth inning, Howie Kendrick had two more big swings and the Nationals beat the St. Louis Cardinals 2-0 on Friday night in the NL Championship Series opener.
Sánchez had allowed just three runners when he took the mound for the eighth. First baseman Ryan Zimmerman robbed Tommy Edman with an outstanding diving grab at full stretch for the first out, but pinch-hitter José Martínez cleanly singled to center with two down for the Cardinals’ first hit.
Sean Doolittle relieved and got four straight outs to finish the one-hitter for his first postseason save in two years.
Sánchez and Doolittle made life easy on manager Dave Martinez on the chilly night after the Nationals placed closer Daniel Hudson on the paternity list before the franchise’s first appearance in the NLCS since the Montreal Expos moved to Washington ahead of the 2005 season.
“I don’t claim to be superstitious, but when you got a no-hitter — I was freezing my butt off and didn’t want to put a jacket on,” Martinez said. “I stayed with this, just this sweat shirt, the whole game.”
Game 2 is back at Busch Stadium on Saturday. Washington ace Max Scherzer starts in his hometown, and Adam Wainwright gets the ball for St. Louis. Stephen Strasburg and Patrick Corbin will follow when the series moves to Nationals Park.
“People were talking about the big three,” Cardinals manager Mike Shildt said, “but we got a guy tonight that we got to contend with and not overlook him.”
St. Louis wasted a solid performance by Miles Mikolas, who pitched six innings of one-run ball in his second career playoff start.
Washington scored each of its runs with two outs. Kendrick doubled and came home on Yan Gomes’ double in the second. Kendrick then singled in Adam Eaton in the seventh after Kendrick reached on a one-out triple against Giovanny Gallegos.
Kendrick also had the big blow in Washington’s Game 5 victory at Los Angeles on Wednesday night, a 10th-inning grand slam.
Gomes finished with two hits while subbing for catcher Kurt Suzuki, who left the Nationals’ clinching victory against the Dodgers with a head injury.
Sánchez became the first pitcher to start two postseason games with six hitless innings. Facing Boston for Detroit in the 2013 AL Championship Series opener, he was replaced by Al Alburquerque at the start of the seventh. The Tigers won 1-0, allowing their only hit when Daniel Nava singled of Joaquin Benoit with one out in the ninth.
Sánchez got his first playoff win since he struck out 12 in that game. He threw a no-hitter for the Florida Marlins in his 13th big league start as a rookie in 2006 and also has pitched four one-hitters.
He started this year 0-6 in his first nine starts but went 11-2 in his final 19.
For a while, it looked as if he might be headed to the third no-hitter in postseason history.
Sánchez retired his first 10 batters before Kolten Wong walked in the fourth on a cool, breezy evening.
Wong stole second and took third on Gomes’ throwing error, but Marcell Ozuna hit an inning-ending foulout.
Pinch-hitter Randy Arozarena was hit by a pitch with one out in the sixth, but the 35-year-old Sánchez retired Dexter Fowler and Wong. He plunked Yadier Molina in the seventh before Matt Carpenter bounced out.
Sánchez struck out five in ninth career postseason start. He threw 67 of his 103 pitches for strikes.
TRAINER’S ROOM
Nationals: Suzuki and OF Victor Robles (strained right hamstring) were out of the starting lineup after they got hurt in the Division Series. Manager Dave Martinez said Robles is about 80 to 85 percent. “To me it’s worth him missing another day or two to get him fully back, hopefully,” he said.
UP NEXT
Scherzer struck out 10 while pitching eight innings of one-run ball against the Dodgers. Wainwright threw 7 2/3 scoreless innings in Game 3 of the NLDS against the Braves.
___
Jay Cohen can be reached at https://twitter.com/jcohenap
___
More AP MLB: https://apnews.com/MLB and https://twitter.com/AP_Sports