Gamecocks, led by Mukuamu’s 3 INTs, win at No. 3 Georgia 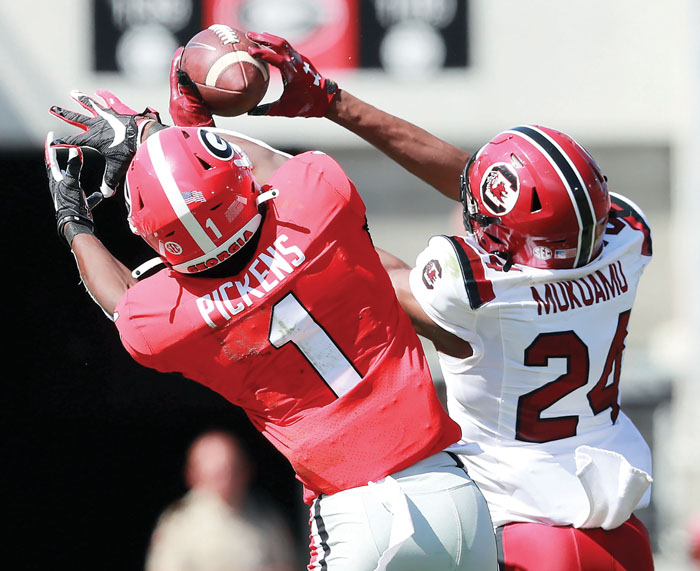 It was four turnovers — on the usually rock-solid Fromm’s three interceptions and lost fumble — that put a big dent in the Bulldogs’ championship hopes.

Israel Mukuamu returned the first of his three interceptions 53 yards for a touchdown and South Carolina took advantage of the turnovers to beat No. 3 Georgia 20-17 in double overtime on Saturday.

“Not as clean as I want it to be,” Fromm said. “There were definitely some turnovers and some incompletions. We should have played more clean. That’s part of it and you wish we had just executed better on offense.”

Parker White’s 23-yard field goal in the second overtime proved to be enough when Blankenship was wide left from 42 yards. Blankenship’s second miss of the game sent South Carolina players charging onto the field to celebrate the upset.

The rowdy celebration continued in the locker room.

White missed a 33-yard attempt in the first overtime.

“I had confidence that I was going to get to go out there and have a chance to win the game for us in the next overtime,” he said.

It was a humbling loss for Georgia (5-1, 2-1 Southeastern Conference), which suffered a big hit to its national championship hopes. The Bulldogs were favored by 24½ points.

One of Mukuamu’s picks came on a pass Fromm was trying to throw out of bounds. Another, on the second play of overtime, bounced off the hands of wide receiver Tyler Simmons. White’s miss from 33 yards kept the game alive.

“You can’t beat anybody when you have a 4-0 turnover margin,” Georgia coach Kirby Smart said. “We didn’t force any on defense. We didn’t cause any problems on defense and we didn’t take care of the ball.”

South Carolina led 17-10 before Fromm led Georgia on a tying 96-yard touchdown drive capped by his 6-yard scoring pass to Demetris Robertson with less than two minutes remaining in regulation.

White, who made a 49-yard field goal in the first half, missed a 57-yarder with 40 seconds remaining to give the Bulldogs one final possession in regulation.

Fromm moved the Bulldogs to the South Carolina 38, in possible position for Blankenship to attempt a game-winning field goal. An illegal shift penalty pushed Georgia back five yards, ending the field-goal possibility as regulation ended.

South Carolina (3-3, 2-2) got its first win over a ranked opponent since beating No. 18 Tennessee in 2016. It was an important signature win for coach Will Muschamp over his alma mater.

“That was a great college football game, and you hate for anyone to lose in that situation, especially the way it happened,” Muschamp said, referring to Blankenship’s final miss. “My heart goes out to him in losing in that fashion.”

The Gamecocks won despite losing quarterback Ryan Hilinski to an apparent knee injury.

Hilinski completed 15 of 20 passes for 116 yards, including a 46-yard touchdown pass to Bryan Edwards, before leaving the game after a late hit in the third quarter. Georgia linebacker Adam Anderson was penalized for roughing the passer.

Fromm threw no interceptions on 111 passes through five games. His first giveaway of the season in the second quarter was costly.

Pressure from the South Carolina defense forced Fromm to attempt a pass off his back foot. The floater from Fromm in the direction of George Pickens was intercepted by Mukuamu, whose 53-yard return gave the Gamecocks the lead.

D’Andre Swift, who ran for 113 yards, had a 1-yard scoring run early in the second quarter.

Georgia: The Bulldogs expected to have a commanding advantage on each line, but they could not wear down South Carolina’s defense as they had against previous opponents. Instead, attempts by Swift and other backs to run at the heart of the Gamecocks’ defense had less success during the game.

Georgia, tied with Ohio State at No. 3, is headed for a fall in the next Top 25.

South Carolina: The Gamecocks face their second straight top-10 team when they return home to play No. 7 Florida next week. South Carolina has won five of the last nine in the series.

Georgia: The Bulldogs will play another home game against an SEC East rival when Kentucky visits on Saturday.