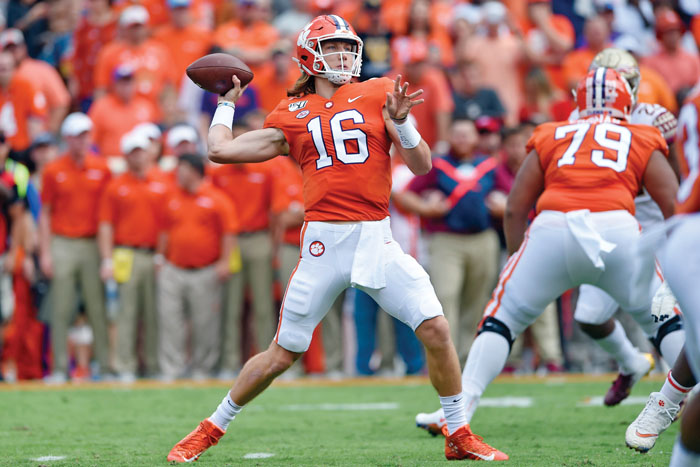 Clemson quarterback Trevor Lawrence drops back to pass during the first half of an NCAA college football game against Florida State Saturday, Oct. 12, 2019, in Clemson, S.C. (AP Photo/Richard Shiro)

The Tigers and coach Dabo Swinney faced two weeks of questions about why the defending national champions needed a last-minute stop on a 2-point conversion to escape the Tar Heels with a 21-20 win. Everything from Lawrence’s health to Travis Etienne’s fumble-itis (he had a key one to keep North Carolina in the game) came under scrutiny as many wondered: What’s wrong with the Tigers?

Lawrence completed 17 of 25 passes for 170 yards, including 10- and 8-yard TD throws to Ross. Lawrence also ran for a touchdown, the 6-foot-6 sophomore extending full body to get over the goal line.

Etienne ran for 127 yards and caught one of Lawrence’s scoring throws.

“We all were challenged over the last two weeks to get back to being who we are,” Clemson co-offensive coordinator Tony Elliott said.

Clemson coach Dabo Swinney pulled out everything he could to make this one a runaway. He had Etienne throw a 23-yard pass to Ross on the opening drive, then went for it on fourth-and-goal from Florida State 3 for Clemson’s first touchdown, an inside pass from 3 yards out.

Swinney showed off this year’s short-yardage Jumbo package on another fourth-and-short near the FSU goal line with starting defensive linemen Tyler Davis, Xavier Thomas and Nyles Pinckney in formation. But Thomas came up just shy of the touchdown.

Moments later when Clemson got the ball back on Chad Smith’s interception with 40 seconds before the half and up 28-0, Lawrence threw twice into the end zone before B.T. Potter missed a 24-yard field goal try. Potter got an earful from an emphatic Swinney after the miss.

Clemson won its 750th game, the 15th program nationally to do that and the first in the ACC.

Don’t expect the “What’s wrong?” questions to continue as the Tigers showed power and motivation to keep on top. Lawrence appeared healthy and confident in dismantling Florida State.

Boyd gets 1st career win after Sauter stripped of…