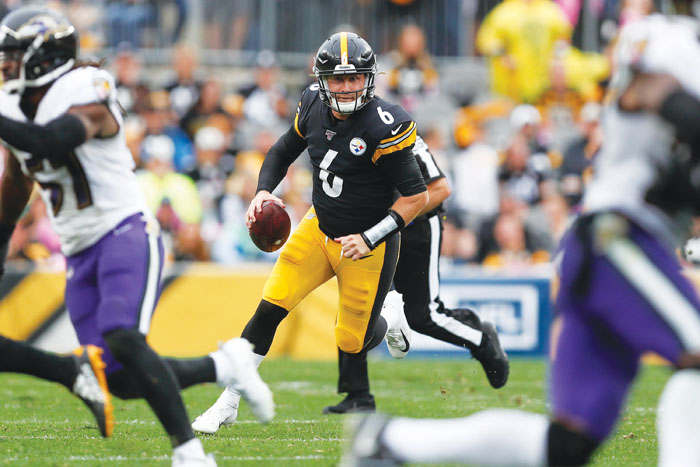 Pittsburgh Steelers backup quarterback Devlin Hodges (6) scrambles for a first down in the second half of an NFL football game, Sunday, Oct. 6, 2019, in Pittsburgh. The Ravens won 26-23 in overtime. (AP Photo/Don Wright)

By WILL GRAVES AP Sports Writer
PITTSBURGH (AP) — It’s officially “Duck” season for the Pittsburgh Steelers.
The Steelers ruled quarterback Mason Rudolph out for Sunday’s visit to the Los Angeles Chargers while he continues to recover from a concussion, meaning undrafted rookie free agent Devlin “Duck” Hodges will get the start when Pittsburgh (1-4) faces the Chargers (2-3) in prime time.
Rudolph was limited in practice all week after getting knocked unconscious by Baltimore’s Earl Thomas in the third quarter of an overtime loss to the Ravens. Hodges, a champion duck caller in his downtime, completed 7 of 9 passes for 68 yards and scrambled once for 21 yards after coming in for Rudolph. Paxton Lynch, signed to the practice squad after Ben Roethlisberger was lost for the season with an elbow injury last month, will serve as Hodges’ backup against Los Angeles.
Hodges, who set a Football Championship Subdivision record for career passing yards at Samford before the Steelers signed him following a May tryout, drew praises from his more experienced teammates for his poise against the Ravens. They don’t expect that to change now that he’s had a full week to prepare.
“One thing about Hodges is he’s going to throw it regardless,” wide receiver JuJu Smith-Schuster said. “He trusts it to us, he puts it out there … Either we catch it, nobody catches it, and that’s when he runs it. He’s very confident in the huddle.”
Wide receiver James Washington (shoulder), linebacker Mark Barron (hamstring), running back Jaylen Samuels (knee) and fullback Rosie Nix (knee) are also out. Cornerback Steve Nelson (groin) is questionable.
Pittsburgh added Lynch and running back Trey Edmunds to the 53-man roster on Friday. To make room for Lynch and Edmunds, the Steelers released linebacker Jayrone Elliott and offensive lineman Fred Johnson.
___
More AP NFL: https://apnews.com/NFL and https://twitter.com/AP_NFL