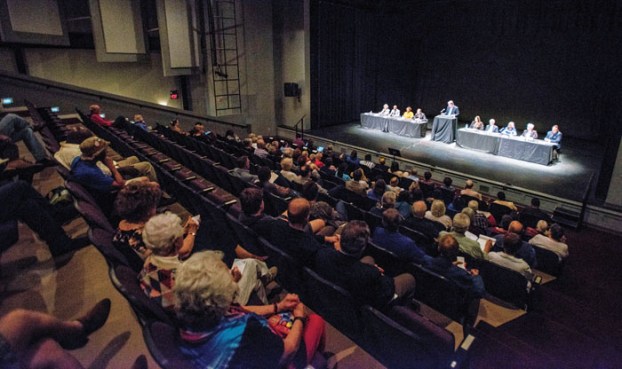 SALISBURY — Economic development was on the minds of Salisbury voters at Thursday night’s City Council candidates forum at the Norvell Theatre.

Incumbents and challengers spoke about how they will lead the city to more economic opportunities.

Among other things, candidates took questions about what they plan to do to attract new businesses and keep them in Salisbury and the role an education system has on economic development.

Councilwoman Karen Alexander spoke about the initiatives the city currently has and should expand upon, including the MSD Incentive Grant and the Building Renovation Incentive Grant.

Alexander said the council has worked to financially support Knox Middle School and STEM training. The City Council can capitalize on the partnerships that exist with Communities in Schools, providing mentorship, and a Rowan-Cabarrus Community College program that allows high school students to pursue an associate degree.

“I pledge to continue serving for stronger communities by supporting initiatives for improving our most vulnerable neighborhoods, economic and workforce development that is aligned with our education attainment programs, and doing initiatives that support and retain new businesses that would provide good jobs,” Alexander said.

Economic development has to be for everyone, Mayor Al Heggins said.

To bring businesses to town and support existing businesses, there needs to be access, support and funding. She mentioned a Historically Underutilized Businesses program later this month that will give access to businesses. Support comes through city investment such as the business accelerator IDEA Center and facade grants to upfit the exteriors of downtown businesses. Building partnerships is critical to funding, Heggins said.

Councilman Brian Miller talked about the resources the city has gained, such as creating a business-friendly environment with the the one-stop shop that allows business owners to go to one location for all they need to open a business. Talks to improve the business atmosphere need to include entrepreneurs, he said.

“We’ve got to bring our development community to the conversation,” Miller said. “We can’t just do things to them. We need to do things with and for them, so we can create a good environment.”

Challenger Giannina Monzon said the City Council should plan and research what other cities have done to be open to change and innovative ideas.

“There are a lot of great cities all across the nation that are doing great work to welcome these ideas,” Monzon said. “Yes we need funding and incentives, but the community needs to be open to that.”

Mayor Pro Tem David Post narrowed down what he thinks will bring new businesses and encourage entrepreneurs to improving schools, working to get results with the IDEA Center, creating an angel fund for minority business owners and moving the farmers market to the intersection of Main and Innes streets.

Improving schools was a top solution for better economic development for many of the candidates, and the city needs to do more to be involved, they said.

“This is the biggest issue that the city of Salisbury faces,” Post said. “Yes, there is a direct relationship between economic development and public schools.”

The City Council should look at expanding the backpack program to ensure students have enough food and guarantee teachers can work with students who are bringing at-home problems to school, Post said. He said the schools need to talk about birth control in middle schools and provide options for child care for high schoolers.

Miller offered the council should create a board that would give the city a voice on education, since it is the single greatest economic development factor that the city has no say in.

Challenger P.J. Ricks said parents aren’t bringing their kids to Salisbury because of bad publicity. She said Salisbury is a great city but locals don’t recognize that. The “renewal” school system brings innovation into education, and the city needs to ensure that it also helps the reputation of the city by ensuring employees have a living wage, she said.

Answering a question on the relationship between economic development and the reputation of public schools, Councilwoman Tamara Sheffield said Salisbury has a reputation problem. Sheffield said the city is on the right path, but the reputation needs to be repaired. She noted, along with other incumbents, that Salisbury is the only municipality that provides funding to Rowan-Salisbury Schools.

Sheffield offered the idea of having a countywide science fair downtown that would allow students to brag about their accomplishments. Having good “coming out of the community” will bring more businesses to Salisbury, she said.

“We have nothing but good things ahead of us and businesses will be coming here,” Sheffield said.

Challenger John Struzick, who is campaigning to restore positive energy, says businesses should be invited into the education process. Businesses bring more innovative ideas compared to government and education systems, he said.

“What better way to enhance the education process than have businesses involved — both in terms of financial investing but also in terms of mentoring,” Struzick said. “Having business leaders into the community come into the schools. I think if we invite them in they will come.”

Not all candidates were asked the same questions, but candidates also were asked about improvements to the Parks and Recreation Department’s facilities and what’s next regarding the “Fame” Confederate statue.

Voters will be able to watch the forum on Access 16, which will air it periodically.

According to Rowan County Elections Director Brenda McCubbins, challenger Ladale Benson has closed his campaign committee. He was not in attendance Thursday.

The next City Council forum will be hosted by the Youth Council of YSUP Rowan at 6-7:30 p.m. Oct. 29 at the Salisbury Elks Lodge.

The last day to register to vote is today. Early voting begins Wednesday.

SALISBURY – Some Rowan County residents are celebrating the news that developers of China Grove Solar have withdrawn plans to... read more