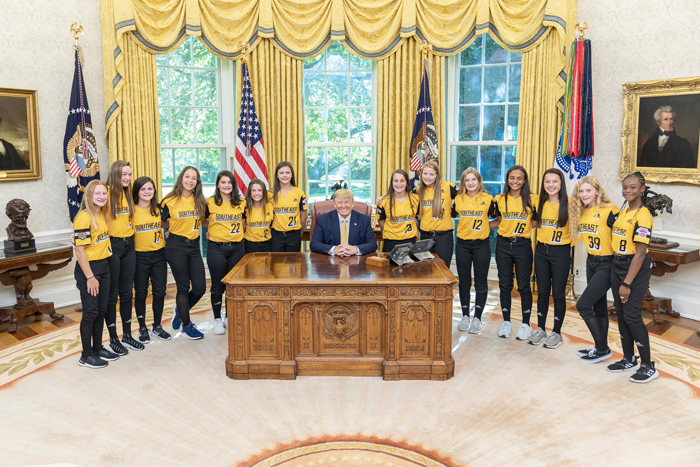 Members of the Rowan County Little League softball team meet with President Donald Trump in the Oval Office on Friday afternoon in celebration of their championship in the Little League World Series. White House photo

“Honestly, it’s been unreal,” said team member Kennedi Fisher in a telephone interview. “It has been really busy today and really cool. We’ve been able to tour the White House, take pictures outside, and visit different places.”

“We were able to see pictures of previous presidents in different rooms throughout the White House,” Kennedi said. “We saw the East Wing and the Oval Office. I thought it was pretty cool. There were a lot of small details that I could see in person rather than through pictures such as details in the door of the Oval Office and the desk in the Oval Office.”

She said it was a great experience.

“I actually got to speak to the president for a little bit. He asked me about the championship game, and I got to press the red button. I was expecting an alarm to go off, but it was actually a service button for things such as a snack or drink,” she said.

The entourage flew out of the Statesville Regional Airport on Victory Air, which donated use of a 50-passenger plane, said head coach Steve Yang.

The entourage toured the U.S. Capitol, then went to the White House for a meet-and-greet and photo shoot with the president. A visit to the Supreme Court and Arlington National Cemetery was also planned.

Fourteen team members were on the trip.

The group flew out Friday morning out and were set to return Friday evening.

“This is just a celebration trip, a culmination of a long hard summer and winning the World Series championship,” Yang said.

Yang said the team and its supporters were in the Oval Office for 30 minutes, then were set to visit the Supreme Court and meet Associate Justice Brett Kavanaugh.

“The players were awe-struck,” Yang said. “President Trump was very personable to the girls, (had) great conversation and made them very comfortable.”

The players were excited about the visit.

Campbell Schaen said D.C. as a very busy place with a lot of people.

“It’s just very weird to know that you’ve just met the president of the United States,” Campbell said. “It’s actually amazing that they recognized us and invited us to be with them. My family arrived yesterday and came out to the White House. We’ve been to the Lincoln Memorial, the Smithsonian, and have been to the Washington Monument.”

Kassidy Sechler said the White House visit was a once-in-a-lifetime experience that not many people have a chance to enjoy.

“We just met the president. He was very nice and down-to-earth and was willing to speak with us,” she said. “It’s not every day that 13-year-old girls get to go and meet the president, and not a lot of people get to go in the Oval Office.”

She said the Oval Office is “very nice” and “very clean.”

“It was really pretty the way it was set up,” Kassidy said. “This really shows you where hard work and dedication can get you and how much support we had back home and from everyone else.”

The team received the invitation after Yang sent a tweet to Trump requesting one after noticing that the Little League baseball championship team from Louisiana had been invited to the White House.

Yang’s tweet stated: “President Trump, my name is Steve Yang and I am the head coach of Rowan LL in Salisbury, NC, that recently won the softball Little League World Series in Portland, Oregon. Wanting the team to get an invite to the White House like the boys team from Louisiana.”