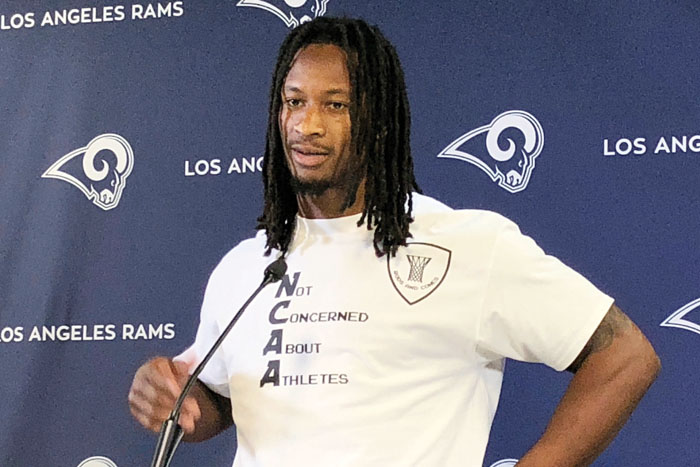 Los Angeles Rams running back Todd Gurley wears a shirt reading "Not Concerned About Athletes" to his weekly news conference at the team's NFL football training complex in Thousand Oaks, Calif., Thursday, Oct. 10, 2019. Gurley also spoke out in favor of college athletes being able to make money off their likeness in accordance with a new California law. (AP Photo/Greg Beacham)

By GREG BEACHAM AP Sports Writer
THOUSAND OAKS, Calif. (AP) — Todd Gurley has spelled out his feelings about college athletes’ ongoing fight with the NCAA over compensation for their work.
The Los Angeles Rams’ star running back wore a shirt reading “Not Concerned About Athletes” in bold letters to his weekly news conference Thursday at their training complex. The first letter of each word is in a font identical to the NCAA’s brand and logo.
Gurley has personal experience with the NCAA’s rules around amateurism: He was suspended for four games of his junior season at the University of Georgia in 2014 for receiving a reported $3,000 for autographs and signed memorabilia over a two-year period.
“I’ll just let my shirt speak for itself,” Gurley said with a sly smile.
“Just being a college athlete and obviously going through suspension and all that stuff, you’ve got to see both sides of it,” he added. “Obviously everyone has their own opinion, but I’m always for the athlete. So more ways for the athletes to make some decent money off their name, for sure, they deserve it.”
California Gov. Gavin Newsom signed a bill into law last week forbidding colleges from punishing their athletes for making money from the use of their name or likeness starting in 2023. The NCAA has stridently opposed the law, but also has proposed an evolution on its existing rules to make them friendlier to athletes.
When asked whether financial compensation would have improved his college experience Gurley cracked: “I was fine. That’s why I got suspended in the first place.”
Jokes aside, Gurley claimed he didn’t harbor any resentment from his college experience. He remains an ardent Georgia supporter, but he would have loved to go through his college experience with more reward for his play at a brutal position in a rough sport.
“Most of us are kids that didn’t come from much, and most of us, it was our first time out of our own bedroom,” Gurley said. “It’s just one of those things. It’s college. You’re having a good time just like anybody else.”
Gurley tore a knee ligament in his first game back from his suspension, ending his Bulldogs career. He entered the draft early, and the Rams chose him with the 10th overall pick in 2015.
Three impressive NFL seasons later, Gurley agreed to a four-year, $60 million contract extension with $45 million guaranteed in 2018, setting an NFL record for running backs since surpassed by Ezekiel Elliott.
Gurley is off to a quiet start this season, ranking 18th in the NFL with 270 yards rushing. He is also uncertain whether he will play for the Rams against the unbeaten San Francisco 49ers on Sunday after missing practice Wednesday with a bruised left thigh.
The Rams only held a walk-through practice Thursday due to dangerous Santa Ana winds in Ventura County, and Gurley isn’t predicting how his leg will respond to two more days of treatment.
“It’s getting better,” Gurley said. “I’m focused in on trying to get better each day. You feel something during the game, but it’s been getting a lot better since the day after the game. … What’s today, Thursday? We’ve got Friday, Saturday. Just get back right, and make that decision when the time comes.”
___
More AP NFL: https://apnews.com/NFL and https://twitter.com/AP_NFL