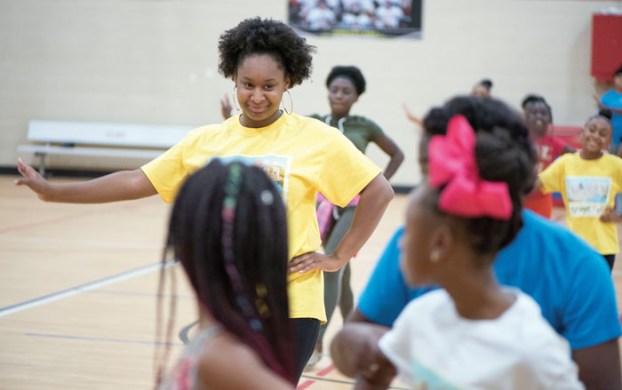 Daesha Morris is one of the three dance coaches who volunteer to help teach the girls a routine at A Bridge 4 Kids. Jon C. Lakey/Salisbury Post

Quotes of the Week: ‘You can get Bojangles any time …’

“We help them have an outlet, turn negatives into positive experiences.”

— Daesha Morris, who teaches dance to young girls in the A Bridge 4 Kids after-school program that was founded by Knox Middle School student Brooklynne Witherspoon as a way to combat violence after the shooting death of her cousin, A’yanna Allen, in 2016

“You got to get the chicken and dumplings. You can get Bojangles any time of the week.”

— Ben Patterson, who was enjoying the food and fun of the 40th annual Autumn Jubilee
with his wife and mother last weekend at Dan Nicholas Park

“My dream was the GED. If you have a dream, fight for it, because you can do it.”

— Matilde Mendez, a native of El Salvador whose family fled the civil war to come to the United States and who earned her GED in May at Rowan-Cabarrus Community College after 40 years in America and six years of study

— Salisbury Mayor Al Heggins, during a presentation on “opportunity zones” to spur revitalization and a visit from the executive director of the White House Opportunity and Revitalization Council for a tour of investment projects in the city on Tuesday

“At least now we know what we’ve got to work on.”

— DeAndre Moore, defensive lineman for the Livingstone College football team, after a 44-0 rout by Virginia Union last Saturday, the Blue Bears’ first loss of the season

— Shari Graham, an organizer of the ’Tis the Season Spectacular holiday parade, on the success of last year’s inaugural parade and signs that it will become a new tradition

While Tuesday’s visit by a White House official brought much-needed attention to a tool for revitalization, it’s important to be... read more