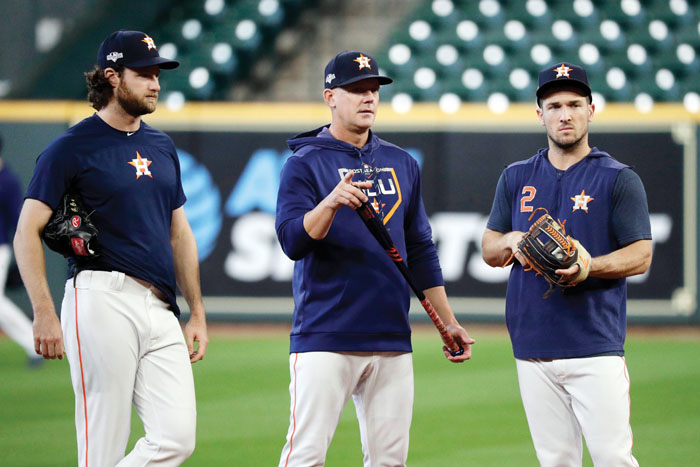 By KRISTIE RIEKEN AP Sports Writer
HOUSTON (AP) — It’s the AL Championship Series matchup most everyone expected entering the season.
But the paths the Houston Astros and New York Yankees took to get here weren’t exactly what either team envisioned.
“It’s definitely been brewing,” Houston ace Justin Verlander said. “We heard from the first series we played each other: ‘Here’s an ALCS preview’ (and) it worked out.”
Jose Altuve, Alex Bregman and the Astros led the majors with a franchise-record 107 wins but needed five games to dispose of the wild-card Tampa Bay Rays in the AL Division Series. Aaron Judge, Gary Sánchez and New York overcame a laundry list of injuries to win 103 games and its first AL East title since 2012, then flattened the Twins.
“Both teams got here and they earned their way here maybe not as easily as people want to think,” Astros manager AJ Hinch said. “I think both teams had injuries. Both teams played well in the face of expectations, and it’s just not a simple plug-and-play season. One-hundred and sixty two games will expose you to a lot of different challenges.”
Game 1 is Saturday night in Houston after the Astros secured home-field advantage throughout the postseason by posting MLB’s best record.
“That’s huge for us that we get to start the ALCS here,” Altuve said. “We like it here. The stadium gets so loud that sometimes that helps us as players.”
While the Astros have home-field advantage, the Yankees could have some other edges. Since they swept their series they’ll have had four days of rest by Saturday’s game and will have their entire pitching staff available for the opener.
The quick turnaround for the Astros means that they won’t be able to start Gerrit Cole or Verlander in Game 1 and will instead go with trade-deadline acquisition and 2009 AL Cy Young Award winner Zack Greinke, who struggled in a Game 3 loss in the division series.
Verlander will start Game 2 on Sunday night in Houston and Cole will get the nod in the third game on Tuesday in the Bronx.
“Three exceptional starting pitchers, and happy to line them up that way,” Hinch said.
The Yankees will counter with Masahiro Tanaka in Game 1, James Paxton in the second game and Luis Severino on Tuesday.
“Tough one to be made but similar to the division series, where I was going back and forth a lot,” manager Aaron Boone said. “Just felt like Masa here in Game 1 is the way I wanted to go in the end.”
These two AL Goliaths have matched up in the playoffs often in recent history. Houston beat the Yankees in a seven-game ALCS on the way to its first championship in 2017. The Astros also won the 2015 AL wild-card game at Yankee Stadium.
The Astros are in the ALCS for a third straight year and the Yankees return for the second time in three seasons after falling to eventual champion Boston in the division series last year.
Houston swept a three-game series against the Yankees at home in April and the Yankees won three of four at home in their second matchup in June.
Some things to know about the ALCS.
UNLIKELY SLUGGER
Altuve has shown a knack for home run hitting in October. The 5-foot-6 All-Star had three homers against the Rays to give him 11 in his postseason career. He connected Thursday night to pass Chase Utley for most by a second baseman in postseason history and tie George Springer for most by a player in franchise history.
“We all know how hard it is to score a run in the playoffs,” Altuve said. “So every one of those homers that I have hit is helping the team and hopefully I hit more.”
ROSTER DECISIONS
Both teams have some important decisions to make before they set their rosters for this series. Hinch said he plans to carry one more pitcher than he did in the division series, but wouldn’t commit to who that would be. It’s likely to be reliever Brad Peacock, who was left off the ALDS series after missing time late in the season with soreness in his throwing shoulder.
For the Yankees, Boone he has yet to make the final call on if center fielder Aaron Hicks and left-hander CC Sabathia will make their roster. Hicks has been out since the beginning of August with a strained right elbow and Sabathia was left off the roster against the Twins after not bouncing back well after a relief appearance late in the regular season.
COLE WORLD
Cole was brilliant in two starts in the ALDS, so brilliant in fact that Boone likened watching the right-hander pitch on Thursday night to seeing a Little Leaguer playing in the wrong age bracket.
“I was thinking … he looked like he aged out or something, like check his birth certificate,” Boone said with a laugh. “He’s like the kid still pitching in Little League that was a little too good for the league.”
Cole was 2-0 with a 0.57 ERA and 25 strikeouts across 15 2/3 innings against the Rays.
HOME SWEET HOME
These teams had the two best home records in the AL this season with the Astros going 60-21 in Houston and the Yankees posting a 57-24 mark in New York. Home-field advantage was huge the last time these teams met in the postseason, with the home team winning every game in the 2017 ALCS.
___
More AP MLB: https://apnews.com/MLB and https://twitter.com/AP_Sports