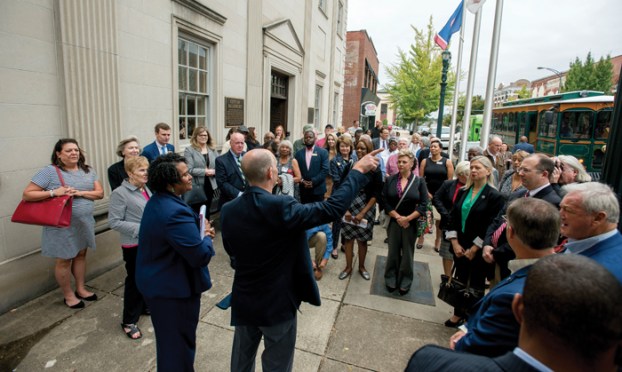 Mayor Al Heggins and architect Pete Bogle give a brief overview of the Empire Hotel project during an event about opportunity zones. Jon C. Lakey/Salisbury Post

While Tuesday’s visit by a White House official brought much-needed attention to a tool for revitalization, it’s important to be clear about the exact purpose of opportunity zones.

Opportunity zones, of which Rowan County has several, are tax shelters created by the 2017 tax bill in the form of economically distressed areas. People who put their money in opportunity zones can reduce what they pay in taxes significantly. People who invest in an upscale apartment development in a low-income area, for example, can realize profits from opportunity zones that will go untaxed.

And that’s not a partisan interpretation. Here’s a description straight from the N.C. Department of Commerce website: “A new program with the potential to attract investment capital into low-income areas of North Carolina was created by recently passed federal tax legislation, known as the Tax Cuts and Jobs Act (H.R.1). North Carolina Opportunity Zones will offer qualified investors certain tax benefits when they invest unrealized capital gains into these areas.”

Salisbury and Rowan’s smaller communities may be able to capitalize on the opportunity zones around us, as long as there are interested investors. But to be clear, there’s no mandate that developments be affordable for most people.

It was a wise move by Mayor Al Heggins to get people together to talk about opportunity zones on Tuesday and bring a White House official to town. But it’s critical to avoid talking about opportunity zones as if it’s part of a campaign platform or that they will benefit most people. (It’s election time. It’s unlikely Tuesday’s visit was planned without that in mind.)

The primary goal in communities with opportunity zones should be to attract people who are looking to invest money in interesting projects and save on their tax bill. That sounds like an unattractive proposition. Who wants to help people with money reduce their taxes? But it’s not a bad proposition if those tax savings come because of investments that push community projects along.

Salisbury and Rowan County must primarily focus on the suggestion by Scott Turner, executive director of the White House Opportunity and Revitalization Council, that the community create a prospectus that “puts you in the game.”

Simply put, Salisbury and Rowan County must create a good marketing plan and run with it. The plan must make the proposition of investing in an opportunity zone in Salisbury or Rowan County just as or reasonably close to being as attractive as in Charlotte, Raleigh or New York City.

And because the Rowan County Economic Development Commission is well-practiced in pitching our community to big developers, it seems suited to lead the effort. The Rowan County Chamber of Commerce will be a vital partner, too. And the developer of the Empire Hotel, Britt Weaver, hasn’t been shy about saying the project’s redevelopment will be capital-intensive or require a lot of money. So, with a project plan in hand, Weaver will make a great asset in Salisbury’s efforts to pitch its opportunity zones.

A key question is whether the developments funded by opportunity zone investment will gentrify the economically distressed communities they cover. And unfortunately, if it’s private money and private property, there’s not a whole lot the city can do, other than resort to zoning and building codes. However, city officials, including council members, can certainly put pressure on developers to have a positive social impact.

Let’s make good use of the many acres that are designated opportunity zones in Rowan County and focus on pitching to investors but avoid creating a special committee and a long process — something for which the city of Salisbury is notoriously known. The city and county should collaborate with the Economic Development Commission to create a good prospectus, getting community voices, and allow Rod Crider’s organization to do what it does best — sell Salisbury and Rowan County.

There are few winners in news that a massive solar farm proposal has been withdrawn. The solar farm would have... read more