No. 19 Wake Forest debuts first ranking since ‘08 vs. Louisville 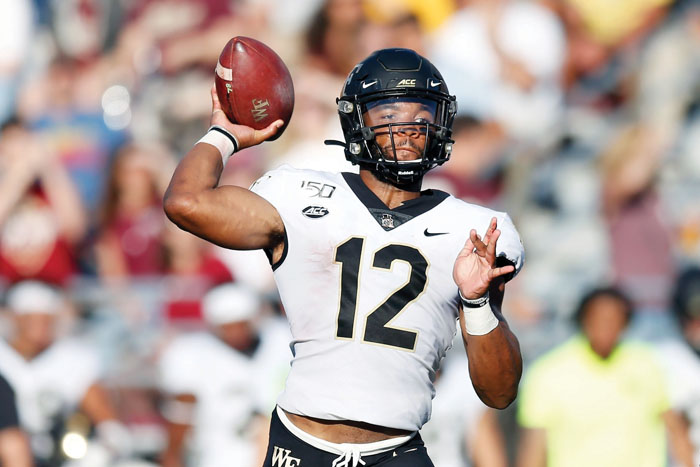 Wake Forest is playing its first game as a Top 25 team in 11 years and a victory will give the Demon Deacons their first 6-0 start since the 1944 team opened with seven straight wins. For the Cardinals, knocking off Wake Forest would count as their first big victory under new coach Scott Satterfield — a native North Carolinian who played and coached 90 miles away at Appalachian State before taking the Louisville job last year.

Wake Forest’s offense vs. Louisville’s defense. The Demon Deacons’ snap-happy offense ranks second in the FBS with an average of 82 offensive plays run per game. QB Jamie Newman is fourth nationally with an ACC-best average of 356.6 total yards and two receivers (Sage Surratt and Scotty Washington) are in the top 20 nationally in average yards receiving. That puts a lot of pressure on a Cardinals defense that has given up at least 500 yards in two straight games.

Louisville: Freshman RB Javian Hawkins is coming off a season-best 172 yards rushing in last week’s victory over Boston College, and the Cardinals might need even more production from him if their path to an upset involves controlling the clock and keeping the Demon Deacons’ offense on the sideline.

Wake Forest: Newman quietly might be having the best season among current ACC quarterbacks — yes, even better than Clemson’s Trevor Lawrence. Newman, who took over last November when starter Sam Hartman was injured and then beat him out during preseason camp, leads the conference with averages of 356.6 total yards and 304.2 yards passing and a passer rating of 169.6.

This is Wake Forest’s first game as a ranked team since a 26-0 loss at Maryland on Oct. 18, 2008. … The Cardinals are starting a stretch of three games against the ACC’s Top 25 teams. They play host to No. 2 Clemson and No. 20 Virginia on the next two Saturdays. … The last time the Demon Deacons started 5-0, they went on to win the ACC in 2006 and earned a spot in the Orange Bowl — where they lost to Louisville.

MIAMI GARDENS, Fla. (AP) — The Atlantic Coast Conference’s Coastal Division has seven teams, and there’s been a different champion in each of the last six seasons.

Virginia is the outlier.

The 20th-ranked Cavaliers (4-1, 2-0 ACC) head to Miami (2-3, 0-2) on Friday night in a game where they could remain in full control of this season’s division-title chase. It begins a stretch that Virginia coach Bronco Mendendall’s staff likened to a roller coaster — in a text chain among the coaches, they even used roller-coaster emojis to underscore the point.

Mendenhall apparently doesn’t know what an emoji is (“the little pictures that you put on the text,” he calls them), but no one needs to explain to him how vital this game could be to the Cavs’ Coastal hopes.

“Much like (when) you’re at a carnival going into one of the rides, now here is the Coastal ride,” Mendenhall said. “And we’re going right into five straight Coastal games, and those are more meaningful and they are more impactful.  … And holy cow, you never know what’s going to happen when you’re on that ride.”

The ride has been bumpy for Miami and first-year coach Manny Diaz, who are trying to avoid starting 0-3 in conference play for the first time ever. It hasn’t happened to Miami in the ACC era that goes back to 2004, or its Big East tenure before that.

The Hurricanes are making two major changes this week. N’Kosi Perry is starting at quarterback for the injured Jarren Williams, and Diaz said he’ll have more of a role with the defense. He was Miami’s defensive coordinator for three seasons prior to becoming head coach, and after giving up 42 points to Virginia Tech last week Diaz has clearly seen enough.

“Ultimately I am responsible for how we play on defense,” Diaz said. “There is a culture that was created here back in 2016 that, for some reason, we have not been able to recreate. It is not a coaching issue. It is not a scheme issue.”

Here’s some of what to know going into Virginia-Miami:

This is the second straight year that Virginia has had a bye week prior to facing Miami, and byes seem to have worked wonders for Mendenhall’s teams in recent years. His teams at Virginia and BYU are 4-1 in their last five regular-season games with an extra week to prepare.

Miami started 10-0 in 2017, climbing to No. 2 in the AP Top 25 poll — with the last win in that streak coming against Virginia. It’s been all downhill from there. The Hurricanes are 4-12 against teams from Power 5 conferences since (5-0 against all other schools), 4-8 against members of the ACC and 1-4 against ranked teams.

Virginia won its lone ACC game away from home so far this season, prevailing in Pittsburgh. Getting two in a row in league play on the road is something no one on the current roster has ever done. The Cavaliers haven’t won consecutive road ACC games since winning three straight in 2011. In fact, that was also the last year in which they had more than one ACC road win in an entire season.

Part of the reason why Diaz is going to have more of a role — whatever that means — in the defense this week is because of that group’s penchant for giving up the big play. The longest pass the Hurricanes allowed in 2018 was 45 yards. This year, Miami has allowed a pass of at least 60 yards in three different games and lost every one of those matchups. Virginia’s longest pass so far this year: 43 yards.

Virginia is 2-10 in its last 12 Friday games. Miami has dropped its last two Friday games (at Boston College last year, at Pitt in 2017). While it may seem strange for the Hurricanes to play on Fridays, it used to be the norm. This is 295th time the Hurricanes will play a Friday game (178-105-11 previously), while Virginia is playing its 20th (7-11-1 coming in).