Kendrick slam in 10th lifts Nats over Dodgers 7-3, into NLCS 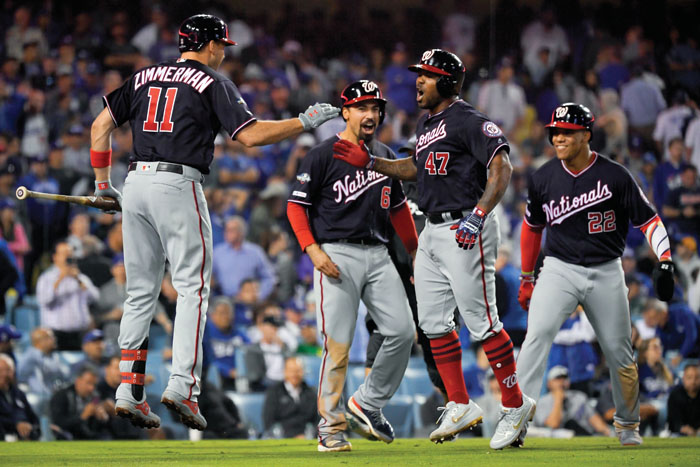 By BETH HARRIS AP Sports Writer
LOS ANGELES (AP) — Howie Kendrick hit a tiebreaking grand slam off Joe Kelly in the 10th inning, and the Washington Nationals overcame a three-run deficit with a late rally to beat the Los Angeles Dodgers 7-3 Wednesday night and advance to the NL Championship Series against St. Louis.
Three-time Cy Young Award winner Clayton Kershaw blew a 3-1 lead by allowing homers to Anthony Rendon and Juan Soto on consecutive pitches in the eighth.
The wild-card Nationals open the NLCS at St. Louis on Friday night. The seven-time defending NL West champion Dodgers, who led the NL with 106 wins, remain without a World Series title since 1988.
Adam Eaton walked against Kelly leading off the 10th, Rendon doubled on a drive that lodged in the left field wall and Soto was intentionally walked.
Kendrick fouled off a pitch, then hit a 97 mph fastball over the wall in center for his second career slam. The other one was a game-ending, 11th-inning drive against San Francisco in August 2017. Center fielder Cody Bellinger chased the ball all the way to the wall, putting his arms up against the fence as he ran out of room.
Washington overcame a 19-31 start, finished 93-69, then rallied from a 3-0, eighth-inning deficit to beat Milwaukee 4-3 in the NL wild-card game.
“It was electric. Probably the best moment of my career,” said the 36-year-old Kedrick, a 14-year big league veteran. “We never gave up. The city had faith in us, the fans had faith in us. We believed in ourselves, everybody came through for us.”
Daniel Hudson got the win, retiring Will Smith on a drive to the right field warning track with one on and one out in the ninth, then getting Chris Taylor on a liner to center.
Sean Doolittle pitched the a perfect 10th for the Nationals, ending a streak of three straight NLCS appearances by the Dodgers.
The Nationals/Montreal Expos franchise won a postseason series for only the second time, the first since the Expos beat Philadelphia in a 1981 Division Series caused by the midseason players’ strike.
Stephen Strasburg fell behind 2-0 after eight pitches. Joc Pederson doubled on a drive that went through an opening in the left-field wall — the crowd saw it land in the seats and thought it was a home run — but he was awarded the double after a video review. Muncy, who had been 0 for 12 against Strasburg, drove a fastball over the center-field wall.
Hernández on Strasburg’s second pitch of the second inning, another fastball, for a 3-0 lead.
Strasburg gave up three runs and six hits in six innings, struck out seven and walked one.
There was a scary moment leading off the seventh.
Buehler allowed one run and four hits in 6 2/3 innings before Kershaw came in. There was a scary moment starting the seventh when Buehler hit Suzuki in the left wrist and the ball shot up and knocked off his helmet as the ballpark went silent. Suzuki fell to the ground, grabbing his face. He walked off his under his own power and was replaced by Yan Gomes, who moved behind the plate in the bottom half.
UP NEXT
RHP Aníbal Sánchez is the most likely candidate to start the NLCS opener.
___
More AP MLB: https://apnews.com/MLB and https://twitter.com/AP_Sports