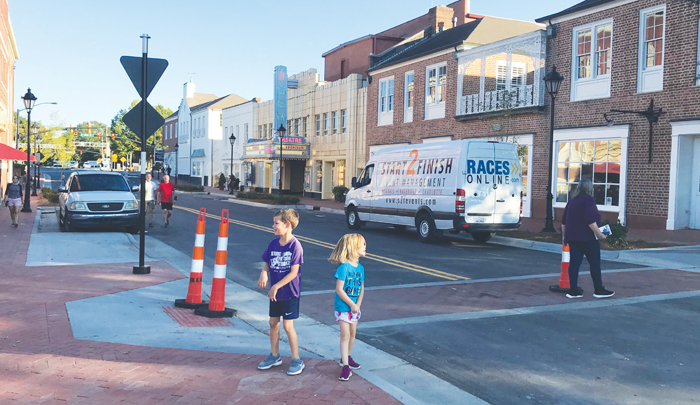 KANNAPOLIS – It’s not often that cities have parties in celebration of just-completed street work, but West Avenue wasn’t an ordinary project.

The city on Thursday celebrated the opening of a new downtown streetscape during a ceremony on West Avenue. It’s one step in an ongoing downtown revitalization project.

Local residents, city officials, family and friends gathered at the roundabout intersection of West Avenue and Laureate Way in celebration of the new space.

“I’m looking forward to the community saying, ‘Oh wow, it really is happening.’ Some of the older citizens were saying, ‘I might die before this happens,’ and now we’re saying it’s here,” Mayor Darrell Hinnant told the Post before the ceremony. “The wow factor will be tremendous.”

Hinnant said revitalization in downtown Kannapolis is now not just a dream, but a reality.

“It’s about our future. It’s about opening up the streets to bring people in to make these places available for our citizens,” he said. “I can bring my kids down let them see the fountains and let them have a good time.”

Hinnant said he believes that through the updated downtown, it “will now be an exciting time again.”

The downtown had been sitting stagnant for a long time. And the improvements will remind people about what it’s  like to go downtown and go shopping again, said Hinnant.

“I bet you we had over 30 hours of discussion out here, we had hour after hour of discussion of what should be here and whether these trees had to go,” Hinnant said during the ceremony. “We were so glad that we were able to hold on to these trees because they mean so much to our community.”

Public Works Director Wilmer Melton said the celebration Thursday was a milestone for the city.

“Over the past 18 months, I’ve had the honor of managing the transformation of our downtown,” he said. “This streetscape and linear park project is the first of many to revitalizing our downtown and will introduce outdoor dining opportunities.”

City Manager Mike Legg said the project was the intersection of business, architecture, urban design and programming. It was visually appealing and highly functional, Legg said.

“This project that we’re celebrating today, it’s perhaps the most important glue to keep all of this together,” he said. “It’s the community living room and a gathering place and an investment in our downtown infrastructure to support commerce, to support business, small business, large and regional and national business.”

“Today is the first step into tomorrow. We all were to sad to see the mill go, but we are also glad that this is opening up so that we can move forward into our future. More importantly, this is not the last step,” Hinnant said.

Hinnant said he’s had many senior citizens express a desire to downsize their homes and purchase smaller ones in town.

Residents of the city applauded the new space Thursday.

“I did not live here when downtown Kannapolis was what it used to be, with all of the stores and restaurants, so it’s really neat to see the revitalization and the excitement surrounding that,” said Kasey Dellisanti. “It’s so great that this place can bring people together from all different parts of town and for everybody to enjoy.”

Dellisanti said she is thrilled to have the opportunity to support the city through the new businesses that will make their home in Kannapolis.

“We’re really excited about the restaurants and the breweries, all of the shops and the things to come,” she said.

Marie Hemrick told the Post that she has lived in Kannapolis her entire life and that it is a pleasure to see downtown open again.

“I’m glad to see all of these buildings come alive and have stores in them again. I’m also glad to see these new apartments they are building,” Deal said.

The streetscape and linear park are one of three projects in the city designed to generate millions in private investment and also employment opportunities, according to the city.

The opening ceremony Thursday was followed by a street festival, filled with food trucks, games, live music and more.

“We hope all of our citizens come and drive through and enjoy all we’ve done to make this possible,” Hinnant said.