High school football: West’s Weeks is stronger than the stats 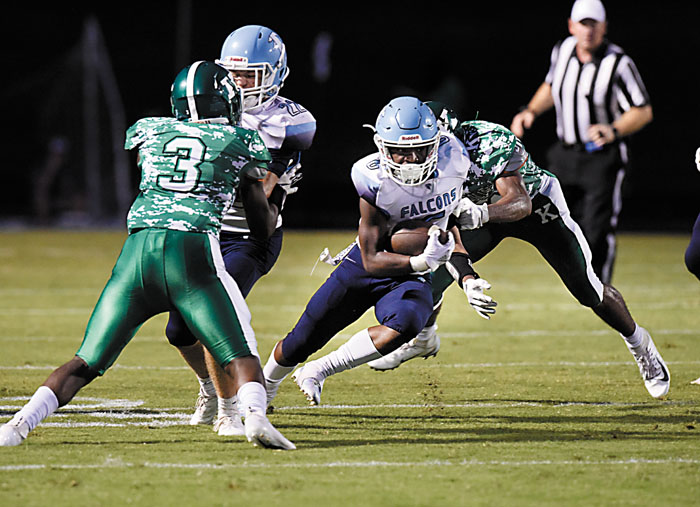 The blocks Weeks throws in the running game to spring Jalen Houston and Cayleb Brawley are just as vital to the Falcons (3-3) as receptions.

“He’s not putting up huge numbers, but he’s done a great job of adjusting to what our offense is trying to do,” West head coach Joe Nixon said. “When you’re running the ball as much as we are (50-plus times against Davie and A.L. Brown), our receivers are asked to do a lot more blocking than pass-catching. Quay is usually our best blocker on the perimeter. I’m proud of the way he’s blocked.”

Weeks isn’t large (5-7, 155), which makes his commitment to blocking even more impressive.

“We all want to go out there and make plays,” Weeks said. “But if I don’t get the ball, I’m going to block. Whatever it takes to help my team.”

Weeks shares the last name of one of the great receivers in county history. Quick, clever and sure-handed, Kortez Weeks was terrorizing defenses for the Falcons not long ago. Now a junior at Elon University, he’s proven to be a success at the Division I level.

A lot of people assume Quay must be Kortez’s brother, but instead they are cousins.

“He worked with me a lot over the summer,” Quay said. “Every day I’d go out to the field, and he showed me things that helped me get better. Korty is like a big brother to me.”

West got down 16-7 at Concord on Friday, but the Falcons roared back to scored 31 unanswered points and won 38-16.

Weeks was targeted three time against the Spiders by sophomore QB Noah Loeblein. He caught two hitches for 17 yards. His other target resulted in a pass interference call that gave West 15 yards and led to a touchdown.

“The corner was playing way off me, so the hitch was there,” Weeks said. “And those hitches can help set up a double move for a big play. On the play where they called pass interference, I ran my best route. I used a double move and the defender jumped all over me. That definitely would’ve been a touchdown.”

For the season, Weeks, who also excels on special teams, has 16 catches for 147 yards. He snagged his only touchdown pass so far against A.L. Brown.

His favorite game of the season, he says, was the 24-21 victory over Davie. He had only catch for 15 yards against the War Eagles, but he believes that game was West’s best team win.

That tells you something about Weeks.

He’s definitely made sacrifices with West’s emphasis on the running game. Last season, with the Falcons throwing it around more, he had four TD catches.

“Weeks is just a real solid guy,” Nixon said. “He’s someone we always know we can count on.”

West plays at East Rowan (also 3-3) on Friday, a critical North Piedmont Conference opener for both teams. Weeks made only one catch against the Mustangs last season, but it was a 33-yard touchdown that put the game away.