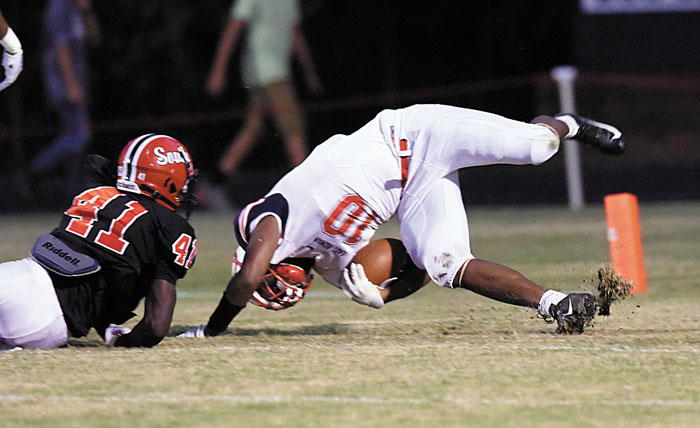 While there’s only one football game being played within the borders of Rowan County tonight, it still shapes up as a fantastic Friday.

Carson is off, but everyone else is involved in a game that matters. There are no sure winners and no sure losers.

There are only two 6-0 vs. 6-0 games that will be played in the entire state tonight. The Salisbury Hornets will be involved in one of them at 2A Central Carolina Conference opponent Oak Grove.

The only other collision of 6-0s occurs in 4A where West Forsyth at East Forsyth meet in Kernersville in a titanic early Central Piedmont Conference showdown. Both are ranked in the top 10.

Then there’s North Rowan, making the trip to Albemarle. While both have taken non-conference lumps, both are 2-0 in league play.

This season marks the 25th anniversary of a North Rowan-Albemarle game for the ages in 1994. That was the year NCHSAA teams were first permitted to play 11 games that counted, so when North Rowan and Albemarle collided for the Yadkin Valley Conference title in a matchup of unbeaten teams, it was the first time two 10-0 squads had ever squared off in North Carolina in the regular season.

Making it even more memorable, that was a game that lived up to the hype. Albemarle beat North, 28-21, in overtime.  North would finish 12-2. Thomasville would knock Albemarle and North Rowan out of the 2A playoffs in back-to-back weeks.

As far as South Rowan, the Raiders have a fighting chance for the first time in about a month. Maybe they can get their second wind — and their second win — at West Davidson.

For Davie (home vs. R.J. Reynolds) and A.L. Brown (home vs. Central Cabarrus) this is the start of league play. They have to win if they’re going to contend. Davie is favored by a little. A.L. Brown is an underdog by a little.

When it came to the picks from the panel last week, Marny Hendrick (22-10) was the prince of prognostication, thanks to East Rowan beating Mount Pleasant, 27-20.

It was an exciting game, although not quite as exciting as someone reported it to MaxPreps and Associated Press. Both had it 64-63 for a while.   That blew a lot of minds until a correction was made.

Scott confidently turned in this week’s picks on a napkin, like he’d been drawing up plays in a restaurant. Marny’s picks were made on a used envelope — but, hey, whatever works.

Marny likes Salisbury, Davie, West Rowan, North Rowan, West Davidson and Central Cabarrus. to win tonight. Scott agrees with him on everything except Salisbury vs. Oak Grove. My picks are the same as Marny’s, which is probably not a good thing for either of us. This is one of those weeks where I might go 3-3.

South has beaten West Davidson by double digits two years in a row and South QB Drew Huffman had the game of his life against West Davidson in 2018, so why is everyone picking the Green Dragons?

West Davidson is a 12-point favorite, with a Massey Ratings win probability of 72 percent, but don’t be shocked if the Raiders pull this one out.

North has won four in a row and everything is on the upswing for the Cavaliers.

North owns a terrific defense and is about a 24-point favorite, with a win probability that is north of 90 percent.

North should be able to hold the Bulldogs under two TDs, while putting up four of their own.

Having said that, it’s been a very competitive series. North leads 8-7 all-time.

Joe Nixon has never lost to a county rival since he took the head job at West, and this is his fifth season in Mount Ulla.

West appears to be much better than the standard 3-3 team, with huge lines and good team speed.

East has Sammy Pinckney, who galloped for 228 yards against West last season, so that’s what the Falcons will try to take away.

West is about a two-TD favorite, with a win probability of 77 percent, but the Mustangs will take their best shot.

The Massey Ratings, not surprisingly, list this as a 50/50 game and project the Hornets to win 14-13.

This is only the second season of varsity football for the Grizzlies, but stocked with talent from the Ledford/North Davidson area, they’re rapidly becoming a power.

It’s basically going to be the irresistible force — Oak Grove has scored 41 touchdowns and averages nearly 300 rushing yards per game — against the immovable object. Salisbury’s defense has been scored on by only one of its six opponents.

If the Hornets can score two or three touchdowns, that should do be enough with the defense they have.

“We know Oak Grove is a good football team,” Salisbury coach Brian Hinson said. “On Friday, we’ll find out if we are. We haven’t faced a whole lot of adversity to this point. If it comes on Friday, we’ve got to handle it.”

Davie lost to R.J. Reynolds last season, but wiped out the Demons in 2017.

Davie doesn’t play any dull games or any low-scoring games, so look for the War Eagles to score 40 and hold off the Demons.

Davie is a 5-point favorite with a win probability close to 60 percent.

The Vikings are favored by about a touchdown.