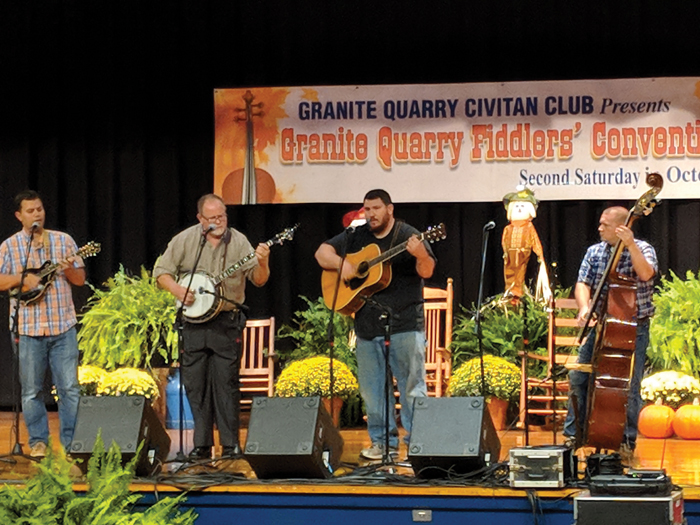 Registration will open at 3 p.m. for all categories. Youth competition begins at 4:30. All adult entries must be registered by 6 p.m. to be eligible to draw a number for performance time in a lottery style drawing. A special jam performance will be held at 6:00pm with all youth performers on stage. Youth winners will be announced at 6:30 p.m. just before adult competition begins.

Each year since 1970 the Club has honored individuals who have made a substantial contribution to the promotion and preservation of traditional old time and bluegrass music. This year’s honoree is  Darrell Connor of Salisbury, winner of numerous awards at the 2018 N.C. State Fair Folk Festival. Those awards included the prestigious Bascom Lamar Lunsford Trophy, awarded each year to the top overall performer. Darrell has hosted ‘Nashville On the Lake’ at his farm on High Rock Lake near Salisbury for fourteen years, drawing hundreds to the event to enjoy the free concert. He will be honored in a special presentation during this year’s Granite Quarry Civitan Fiddler’s Convention and will perform with friends following the presentation.

The two Champion Fiddlers in the Bluegrass and the Old Time Fiddle Categories will be presented The Ralph Pennington Memorial Master Fiddler Award. Pennington, originally from North Wilkesboro, was a luthier of finely crafted string instruments. Although he played all the instruments, he was widely known for playing the fiddle and mandolin and won many awards on both.

The Don and Margaret Livengood Memorial Award will be presented to the Most Outstanding Youth Performer as selected by the panel of judges. The award was created by their daughter, Patti and husband, Walter Beaver in memory of Don and Margaret with Don being the last of the original three Granite Quarry Civitan members who chaired the Fiddler’s Convention Committee. The other two members of the committee were James Mathis and Junior Bost, both of whom are also deceased.

The Civitan Club will serve chopped barbecue plates, hamburgers, hotdogs and desserts throughout the day and evening. Food will be available 11 a.m. until sellout.

Admission to the convention is $8. Children under 12 are free with a paid adult. The event is held on the second Saturday in October each year at East Rowan High School located at 175 St Lukes Church Road. Granite Quarry Civitan Club President is Rick Wilson; Fiddlers Convention Chairman is Norman Ribelin. Vivian Hopkins, President of the North Carolina Bluegrass Association, is the convention coordinator.