Braves will need time to recover from their latest playoff flop 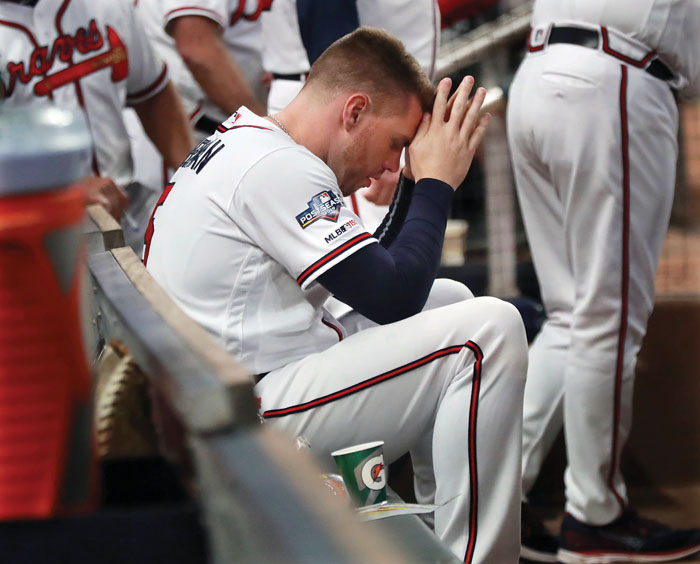 Atlanta Braves first baseman Freddie Freeman sits in the dugout during the ninth inning of the team's 13-1 loss to the St. Louis Cardinals during Game 5 of a baseball National League Division Series on Wednesday, Oct. 9, 2019, in Atlanta. (Curtis Compton/Atlanta Journal-Constitution via AP)

ATLANTA (AP) — One day later, Brian Snitker had shed his uniform but was still wearing the pain of yet another one-and-done postseason exit for the Atlanta Braves.

“It’s going to take me a while to kind of get over this whole thing,” the manager said Thursday.

Snitker and general manager Alex Anthopoulos had no quick explanations for the Braves’ record-tying 10th straight loss in a postseason round. After splitting the first four games of the NL Division Series, the Braves were bowled over and embarrassed in a 13-1 loss to St. Louis in Wednesday’s Game 5.

“You throw that one away,” Anthopoulos said, while adding the loss was “a tough pill to swallow. … From my standpoint in the front office, we need to turn the page quick.”

The Cardinals’ knockout blow was quick and decisive — 10 runs in the first inning.

“It happened so quick, I don’t think there was anything we could do,” Snitker said.

The inability to end that drought hurt more than one year ago, when Atlanta lost to the Dodgers. Management and players believed this team had the talent to play deep into the postseason.

Added third baseman Josh Donaldson, who homered in the loss: “I think what is disappointing about it, I feel like all year we played better than we did today.”

There could be significant turnover before spring training.

Catcher Brian McCann announced his retirement after the loss. Anthopoulos said the team will try to re-sign Donaldson, the third baseman who will be a free agent.

Here are some things to know about the Braves entering the offseason:

Donaldson wasn’t willing to speculate about possibly re-signing with Atlanta. His $23 million deal was the largest one-year deal ever given to a free agent. His all-around production made the Braves feel good about the investment.

“We will definitely have interest in trying to sign him back,” Anthopoulos said.

Mike Soroka, Mike Foltynewicz and Max Fried are probable locks atop the 2020 rotation. If the Braves pay a $1 million buyout to part ways with Teheran and don’t resign Dallas Keuchel, the team may shop for a veteran to help fill the rotation.

There will be another opportunity for at least one rookie to land in the rotation next season. Right-hander Ian Anderson, who finished the season at Triple-A Gwinnett, is a breakout candidate after being named the Braves minor league player of the year. The 21-year-old Anderson was the No. 3 overall draft pick in 2016.

After hitting 38 homers and finishing second in the NL with 121 RBIs, Freddie Freeman hit only .200 in the NLDS. He had a key first-inning error and then tried to take full blame for the loss while adding his late-season elbow injury was not a factor.

“I know everybody is going to say what they want to say but this one is on me,” he said.

Freeman was not the only hitter in the middle of the lineup to struggle. Donaldson’s homer gave Atlanta its only Game 5 run, but he hit just .158 for the series. McCann hit .188 and Markakis was at .143.

Snitker didn’t discuss McCann’s retirement following the game, waiting for the 35-year-old catcher to make his announcement. McCann said he enjoyed renewing a friendship with Snitker that began in the minor leagues, and Snitker returned the compliment on Thursday.

“I’m honored I gave him the call to the big leagues and I got to manage him his last game,” Snitker said, adding McCann ranks with the “all-time Atlanta Braves.”