Livingstone aims to bounce back at St. Augustine’s 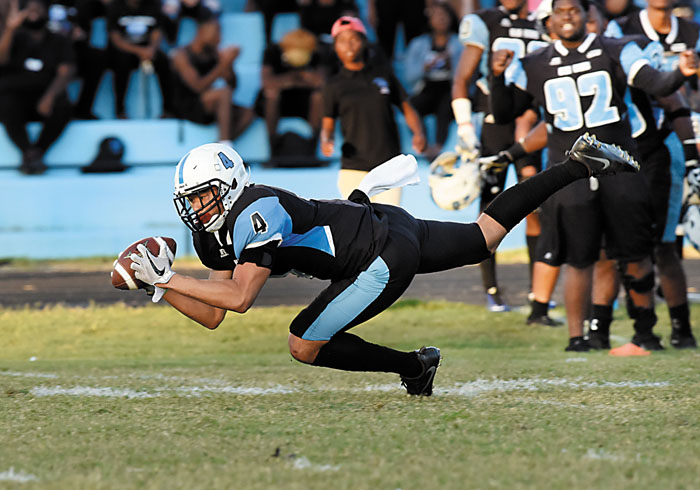 Wayne Hinshaw file photo/for the Salisbury Post ... Livingstone receiver Jordan Cartwright wore No. 4 as a sophomore in 2017, when he made this diving catch against Virginia State. Cartwright is now a senior for the Blue Bears.

SALISBURY — Livingstone’s football team will try to bounce back from its first loss with a visit to St. Augustine’s on Saturday.

The team’s 4-0 start came crashing down on its own field last Saturday, in a 44-0 thrashing from Virginia Union. And that’s exactly why the Blue Bears won’t be overconfident against the 0-5 Falcons.

“We just took a good old-fashioned whooping last week, so I don’t think our players will be overlooking anybody,” said seventh-year Livingstone coach Daryl Williams. “We’ve already established that with our team.

“St. Aug’s has always been a thorn in our side,” continued Williams. “We’ve only beaten them once in my time here. The game always comes down to a play or two and I expect those guys to play hard, despite their record.”

Williams’ memory is correct. Since Williams arrived in 2013, the Blue Bears are 1-5 against St. Augustine’s. The only victory came in 2015, when senior star quarterback Drew Powell led a 31-7 decision in Raleigh.

In fact, since 2002, Livingstone has only won twice in its series with the Falcons.

So, while they won’t be looking past St. Aug’s, the Blue Bears do need to bounce back from the dismal performance last week.

“We got beat by a better football team last week and Virginia Union was even better than they looked on film,” acknowledged Williams. “But, we didn’t help our situation at all by the way we played. Our failure to make several routine plays hurt us a lot. We dropped routine passes and interceptions and our quarterbacks missed some pretty simple and routine reads.

“But, we’re 4-1 and I’ll take it,” added Williams. “Most coaches would take that record at this point in the season. Realistically, you want to be the last team standing at the end of the season, regardless of your record.”

One Livingstone player who is happy to be a part of a 4-1 squad is senior receiver Jordan Cartwright, who arrived as a transfer in 2017 and endured an 0-10 season.

He caught 20 passes that year for 139 yards and a touchdown against J.C. Smith.

“Yes, I went through 0-10 and it feels very good to be 4-1,” said Cartwright. “There’s a huge difference from that season — the atmosphere, the culture of the team, winning games. It’s been fun and I feel like we’ve already moved on from last Saturday. Tuesday began a new week and we’re focused on St. Augustine’s.”

Cartwright was a solid high school player in Miami, first at American and then, his senior year, at Everglades. He was recruited and had some walk-on invitations at some Division I schools, but no scholarship offers. He decided on on Division II Limestone, where he red-shirted in 2014.

From Limestone, he transferred back to ASA Miami Junior College, close to home, and played a season there.

Livingstone recruited Cartwright through some contacts with the coaching staff at ASA.

By his own admission, Cartwright is not a speedster. But he’s not slow, either, and is brave enough to go across the middle. He says he runs the 40-yard dash in the “high 4.5s to low 4.6s.”

“Jordan’s best routes are his slants,” said Williams. “I’m proud of the player he’s become. He knows the offense and has a good grasp of what we’re trying to do. It’s easy to coach guys who have learned the system and plays and thinks like the coaches do. Jordan’s consistently improving and plays ‘bigger’ than he really is.”

Cartwright downplays the “fearless” aspect of going across the middle, but said that he has taken “some big hits” in the process. “I’ve adapted to it, but it’s just playing football. You know you’re going to get hit. It’s just part of the game.”

Football is a competitive game, obviously, and Cartwright said that he enjoys competing on every play.

“As a receiver, I like to compete against DBs,” he said. “A lot of times, you get a one-on-one matchup against somebody and you actually get a result, like ‘I beat you on this play.’ I just like the competitive nature of the position. And you’re always thinking, too, because you have to read the defense and find holes in coverages.”

Cartwright, a sports management major, is scheduled to graduate in December. That will make his parents, Arthur and Judy, happy back in Miami. Cartwright also has a brother, Josh, who is a back-up quarterback at Alabama A&M.

The Cartwright parents don’t travel to every game for Jordan and Josh, due to distance.

NOTE: Saturday’s kickoff at St. Augustine’s is set for 1 p.m. … On Tuesday, Williams wasn’t sure who would start at quarterback for his team, sophomore Miles Hayes or freshman Lazarus Anderson. … The Falcons have dominated the series with Livingstone, winning all but two of the 17 games played this century. … Overall, the Falcons lead the series, 20-4-3.