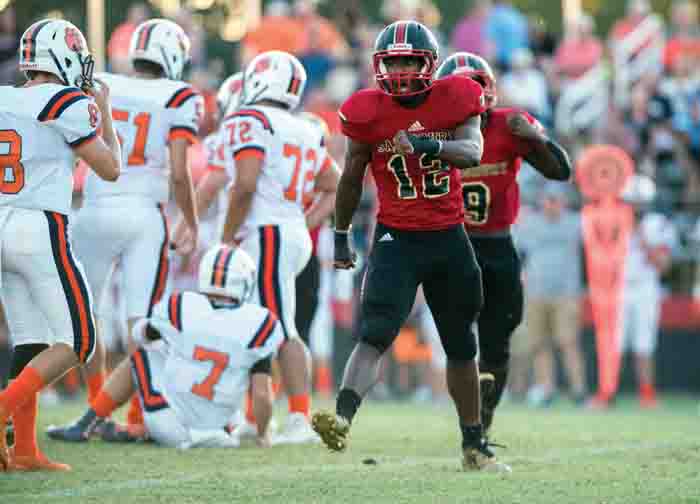 There was an unusual call against the Hornets Friday on a play on which running back McLean was flagged for helping push quarterback Honeycutt past the chains on a fourth-and-1.

That “aiding the runner” penalty was hard to argue with based on the strict wording of the rule, but it didn’t make Salisbury coach Brian Hinson very happy.

“Not saying we didn’t do it, but that was kind of what Central Davidson was doing on every play,” Hinson said.

Central Davidson seemed to possess the ball all night with a conservative game plan, but when the smoke cleared, the Hornets’s defense had allowed just 122 rushing yards on 47 carries, about 2.5 yards per carry.

Salisbury still hasn’t allowed a scoring drive this season. Two touchdowns been scored against Salisbury in six games — one on a trick play and one on a special-teams mishap.

The weight room. Every coach talks about the importance of it.

Salisbury hits the weight room and is stronger — and tougher — than it’s been in a while. That grit showed in the 10-0 win against Central Davidson.

“That’s the kind of physical game that would’ve given us a lot of trouble in previous years,” Hinson said. “But our guys handled it.”

West (3-3) picked off three passes as part of a dominating defensive effort in the 37-16 win against Concord.

KJ Hernandez, Daniel Sell and Reggie Everhart made the picks.

Concord did just about all of its damage on special teams and had no success running or throwing against the Falcons.

“We played our responsibilities well against their option,” West head coach Joe Nixon said. “We got after it. Our defensive line was good, and (linebacker) Baiden Suddarth played like he always does.”

A nice game by receiver Ty’Kese Warren, who had three catches for 74 yards and a touchdown, has him in second place in the county in several receiving categories.

West continues to pound away on the ground and found more success against the Spiders. Jalen Houston rushed 15 times for 154 yards, while Cayleb Brawley, who has become a terrific  second option, chipped in with 17 for 72. Brawley has quietly rushed for 342 yards this season and he got his second TD against the Spiders.

West is now using linebacker Suddarth in the backfield in some short-yardage situations, and he scored a TD against Concord.

Quarterback Noah Loeblein threw two touchdown passes, one to Warren and one on a short flip to Houston on a jet sweep.

Loeblein also had his first effective running game of the season, getting 50 yards on six carries.

West plays at East Rowan on Friday. Both teams are 3-3.

“Not only a county game, but out first conference game and on the road,” Nixon said. “It should be a good one.”

North Rowan’s offensive line is starting to come together and has played a major role in the Cavaliers’ four-game winning streak.

“We don’t have three guys we expected to have, so we’ve had to piece that o-line together,” North head coach Ben Hampton said. “You can tell a lot about your skills guys in the off-season, but those big guys, you don’t really know what you have until the pads start popping.  We ask a lot of them, to pull on the power stuff and to get down the field and get blocks in the screen game. They’re coming along. They’re growing up. They had seven pancake blocks on Friday.”

In Friday’s 53-6 Yadkin Valley Conference win against South Stanly, the Cavaliers got some good work from junior QB Kyree Sims, a first-year starer. He threw one pick-six, but that was the only thing wrong with his night.

“He was 7-for-9 in the first half,” Hampton said. “He’s got a cannon for an arm and good speed. He’s a true dual-threat quarterback. He’s coming into his own, getting better on his reads, and once he gets those reads down, he’ll be special.”

Sims basically missed all of last season when he was hurt in an early jayvee game, but like the o-line, he’s coming along.

“Their quarterback was a very good athlete, but we heated things up for him with our pass rush,” Hampton said.

Malcolm Wilson tied the school and county record with six TDs, and that was with a seventh one called back. Wilson doubled his touchdown total for the season.

Wilson scored four TDs against South Stanly last season, so the Rebel Bulls will be thrilled to see him graduate in May.

Logan Forbis threw his seventh touchdown pass of the season in a 27-20 victory against Mount Pleasant on Friday.

Five of them have gone to Vincent Jones.

The other two went to Cooper Wright, who was lost for the season with a collarbone injury in the Mustangs’ second game.

East continues to run the ball very well, and Sammy Pinckney is nearing 1,000 rushing yards for the season.

Isa’ah Cauthen, East’s second option as far as running the ball, returned to action against Mount Pleasant after missing the lopsided loss at West Stanly. He made an impact, scoring his fifth and sixth rushing TDs of the season.

South Rowan (1-5) is on the road this week at West Davidson.

While South will be in its familiar role of underdog, the Raiders do have their first realistic chance to win in a month. They’ve taken on Central Carolina Conference contenders Ledford, North Davidson and Oak Grove the last three weeks and allowed 40 or more points in each game.

West Davidson is one of 11 schools that South Rowan has a perfect record against. South is 2-0 against the Green Dragons, with those wins coming during the last two seasons.

South is 1-0 against Page (forfeit), Shelby and Hibriten. South is 2-0 against Berry, Lake Norman and McDowell. The Raiders are 4-0 against Forest Hills, Monroe and Wadesboro Bowman/Anson, schools that encountered South during its peak seasons. South is 8-0 against Sun Valley (Sam Howell wasn’t around for any of those) and 10-0 against North Iredell.

Mahleek Sprull has come up the last two turnovers that South has forced. The DB picked off a pass against Oak Grove.

Drew Huffman threw his county-leading eighth touchdown pass of the season and the 18th of his career in last week’s loss to Oak Grove.

It’s worth noting that Huffman had the best passing game of his career last season against West Davidson when he threw for 239 yards and three TDs.

South’s offense used the I-formation frequently against Oak Grove with Nathan Chrismon at tailback. He responded with 142 yards on 27 carries.

Evan Johnston provided most of Carson’s offense in the 28-0 loss to A.L. Brown.

He carried 25 times for 83 yards and accounted for most of Carson’s passing yardage with a 29-yard reception.

Caden Hudson had an interception for the Cougars. Other leaders were DBs Mikhail Gomez and Connor Floyd.

“Our defense played well,” Carson head coach Daniel Crosby said. “We played keep-away from them for a long time and had a good chance to make it 14-7. We fumbled on their 5 and they take it all the way to score.”

Injuries continue to mount for the Cougars, who played without two of their top offensive threats CP Pyle and Zeb Burns.

They’re off this week and will try to get some guys healthy. They’re still 1-0 in the NPC and will be tied for first place with the two teams that win league openers on Friday.

A 28-0 win against Carson gave A.L. Brown three straight wins and a 4-1 start, which is not unusual for the Wonders.

The Wonders want to start 5-0, and they’ve done that quite a few times, but it’s interesting that when they do start 4-1, they generally turn it into 5-1.

Maybe that means something or maybe it doesn’t. The Wonders have a tough home game on Friday. Central Cabarrus is about a touchdown favorite to make the Wonders 4-2.

A.L. Brown had beaten Central Cabarrus 25 straight times in the series before the Vikings broke through last year with an overtime victory.

The War Eagles (3-3) return to action after a week off with a home game against R.J. Reynolds.

The War Eagles are 5-point favorites.

It’s the Central Piedmont Conference opener, and it’s a must-win for Davie, which is in a six-team league with three teams (East Forsyth, West Forsyth and Reagan) that are undefeated and ranked in the top 10 in 4A in the state media poll.

The week off should be beneficial for Davie as far as healing injuries.

It will be interesting to see what sophomore DeVonte Lyerly’s role will be. He emerged as a potential star in the backfield with 308 rushing yards during the two games Carney missed.