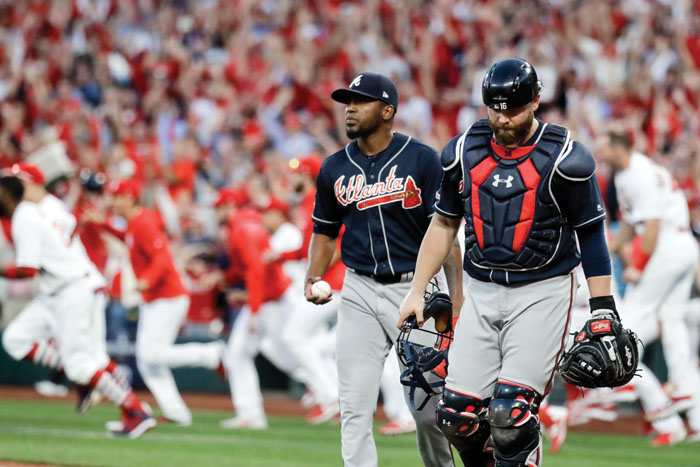 By CHARLES ODUM AP Sports Writer
ATLANTA (AP) — Brian McCann’s Atlanta homecoming didn’t end the way he hoped.
McCann is retiring after a 15-year career that included two stints with his Atlanta hometown Braves, making the announcement Wednesday after the 13-1 loss to St. Louis in the decisive Game 5 of the NL Division Series.
“It’s sad but it’s time,” the 35-year-old said softly in the somber Atlanta clubhouse as he made his announcement. “I had a long career. Fifteen years is a long time, catching every day. I got to play in my hometown.”
McCann, from Duluth High School in the Atlanta area, played his first nine seasons with the Braves. Following three seasons with the New York Yankees and two with Houston, McCann returned to Atlanta to renew a friendship with Braves manager Brian Snitker that began in the minors.
“I’ve known Snit for a long time, since he was a Double-A manager,” the seven-time All-Star said. “I enjoyed the chance to do this with him.”
McCann won a World Series title with Houston in 2017 but couldn’t realize his dream of helping to bring Atlanta its second championship.
“This organization is where it needs to be going into the future,” he said. “It’s got so much talent. I’m really proud I got to put this uniform on again.”
McCann’s announcement produced a quick response from former teammate Chipper Jones, who tweeted McCann is “the best out there” and “one of my favorite teammates ever.”
Jones described McCann as “a true pro, a leader of men, a great father and a best friend!”
McCann started in every game of the series but hit only .188. He was only one part of the middle of the Braves’ lineup that struggled against Cardinals pitching.
McCann’s final regular season was more productive. He hit .249 — his highest average since 2013 — with 12 homers and 45 RBIs while he shared playing time with Tyler Flowers.
“I wanted to be a part of this team, to be back home and play in front of my family every night,” McCann said, adding he didn’t think he would change his mind on ending his playing career.
McCann ranks fifth in Atlanta history with 236 doubles, sixth with 706 RBIs, seventh with 1,139 hits and eighth with 188 home runs. Overall, he hit .262 with 282 homers.
“I went to high school here, I grew up here, I got to play nine years here to start my career,” he said. “I got to play with some of my heroes growing up and coming back to play with a new generation, I’d say it was a success.”
___
More AP MLB: https://apnews.com/MLB and https://twitter.com/AP_Sports