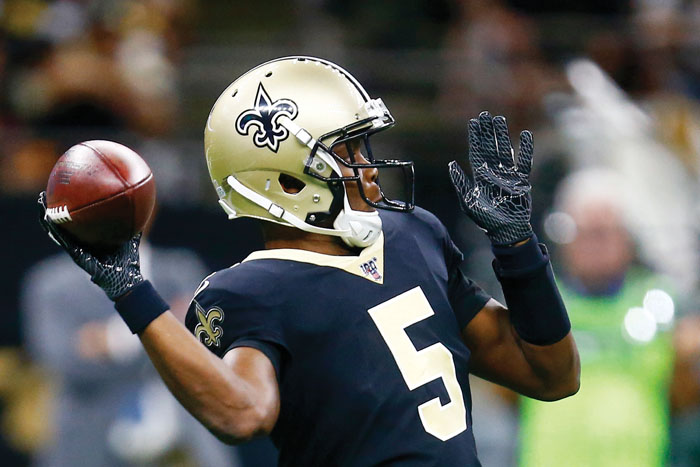 NEW YORK (AP) — When quarterback Drew Brees injured his right thumb in Week 2 against the Los Angeles Rams, the New Orleans Saints’ playoff hopes seemed to be over.

Except Teddy Bridgewater has led them to a 3-0 record since and first place in the NFC South. Bridgewater threw for 314 yards and four touchdowns in a 31-24 victory over the Tampa Bay Buccaneers last week.

The Saints also increased their steady climb in the latest AP Pro32 poll , moving one spot to No. 2.

“Sean Payton is performing like the Coach of the Year,” Newsday’s Bob Glauber said. “The Saints are 3-0 without Drew Brees, a testament to Payton’s resourcefulness.”

The New England Patriots, one of two unbeaten teams in the league, are the unanimous top team; they earned all 12 first-place votes for 384 points in balloting Tuesday by media members who regularly cover the NFL.

The Patriots open Week 6 when they host rookie quarterback Daniel Jones and the New York Giants on Thursday night.

“In the words of the great David Byrne, ‘Same as it ever was,’” Alex Marvez of Sirius XM said of the defending champs.

The Kansas City Chiefs switched places with the Saints, slipping a spot to No. 3 after their first loss of the season, 19-13 to the Indianapolis Colts on Sunday night.

The San Francisco 49ers, the league’s other unbeaten team, jumped five spots to No. 4 after routing the Cleveland Browns 31-3 on Monday night.

“The 49ers are back where they left their fans at the end of the 2017 season — looking like a young, talented team on the rise,” said Ira Kaufman of Fox 13 in Tampa, Florida.

The Green Bay Packers moved up three places to No. 5 after they topped the Dallas Cowboys, who plummeted six spots to round out the top 10.

The Seattle Seahawks remained at No. 6 after beating the Rams, who slipped two places to No. 7.

The Buffalo Bills, who are tied for the second-best record in the AFC, moved up two places to No. 8.

“Defense better than anyone thought,” Fox Sports’ John Czarnecki said of the Bills, who held the Titans to seven points in a victory over Tennessee last week.

Another team that gained two spots was the Philadelphia Eagles, who are at No. 9 after routing the New York Jets.

The Jets are one of four winless teams remaining in the NFL. Two of the other three, Washington and Miami, Nos. 31 and 32, respectively, in the poll, meet on Sunday in South Florida.

“The most interesting game on the schedule this week: Miami vs. Washington,” Charean Williams of Pro Football Talk said. “It is meaningful, with the loser taking the lead for the No. 1 overall (draft) choice.”