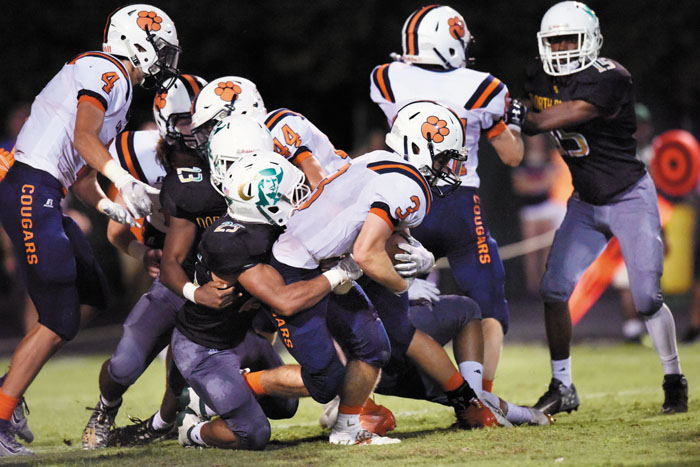 SPENCER — You can make an argument for specializing in one sport in high school to get to the next level.

You can make a better argument for playing multiple sports in high school. More than 70 percent of D-I football players also competed in at least one other sport during their high school days.

North Rowan linebacker Caelan Stinson loves baseball. He started playing the sport alongside his pal Jordan Goodine at the Eighth Street Ballpark in Spencer when he was 6 or 7, and he still loves it. His speed, aggressiveness and competitiveness translate well to baseball, and he’s mastered the diamond sport well enough that he’s the starting left fielder for the Cavaliers.

Stinson dropped football his junior year to focus on improving at baseball. That decision made some sense at the time because he is 5-foot-5, 150 pounds. But during that year away from the gridiron he found out that as much as he loved playing baseball, he missed his football teammates. He missed Friday nights. He even missed practice.

“Yes, I missed it, missed playing, missed my teammates, missed being out there and being part of it all,” Stinson said. “Since YFL, football was a part of me. And during that year away, I realized that football is who I am. Football is me.”

North head coach Ben Hampton never gave up on Stinson, who had been a helpful running back and defensive back for the North jayvees as a freshman and sophomore.

“Every time I saw him in the halls last year I let him know we wanted him back,” Hampton said. “Finally last spring, he told me, ‘I’m going to play my senior year.'”

Stinson has surprised Hampton, his teammates — and himself — with his impact.

“That year away from football was beneficial for me physically,” Stinson said. “I got bigger, stronger, faster.”

North didn’t need another running back because it has superstar Malcolm Wilson, who scored six touchdowns in Friday’s 53-6 romp against South Stanly.

Hampton initially was counting on Stinson to provide DB depth, but he’s been a pleasant surprise. He’s won a job as a starting linebacker, working next to Goodine in North’s 4-2-5 defense.

“He struggled for a few games, as far as reading plays, seeing the guard pulls and seeing all the angles, but he’s settled in as a linebacker,” Hampton said. “Now he’s really playing well, really flying to the football and making a lot of tackles.”

It’s been a blast for Stinson, playing next to Goodine, one of the county’s top tacklers.

“We’re taking this last ride in football together,” Stinson said. “We go back a long way.”

North Rowan’s concern going into the South Stanly game was SS quarterback Jaquez Cooke. He’s a dual-threat athlete who has made a lot of plays with his legs.  South Stanly’s best offensive moments have been scrambles by Cooke, broken plays on which he turned nothing into something for the Rebel Bulls.

Stinson helped shut down Cooke and the Rebel Bulls with a sack, a tackle for loss and four solo tackles. South Stanly’s only score was on defense.

“We knew their quarterback liked to run the ball,” Stinson said. “On that sack, I knew if I didn’t get him, he might get loose for big yardage because our DBs were well down the field, but I got him.”

With North leading 46-0 at half, a priority for North’s coaching staff became getting Wilson out of the game healthy. The Cavaliers didn’t want to risk getting him hurt in a game that was already won.

“They told me at halftime to be ready because I was going to get some carries,” Stinson said.

Wilson sat down for good after his sixth touchdown with 8:06 left in the third quarter. North didn’t have any young backs available to put in, so Hampton turned to Stinson.

Stinson helped the Cavaliers close things out with four carries for 45 yards.  He enjoyed himself.

“Running the ball again, it was like going back to my jayvee days,” Stinson said. “The thing about playing both ways is you do get more tired. You just have to have the mindset of being tough and playing through it.”