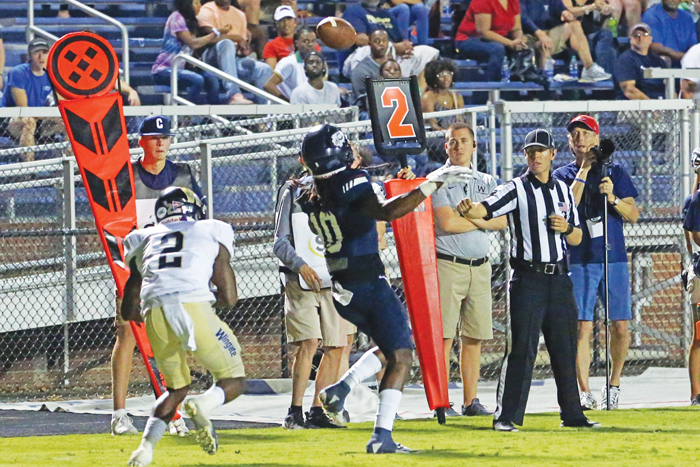 Everyone on the sideline watches as Catawba’s #10 Kolby Easly tipped the ball in the air but completed the catch out of bounds. ... James Sipes for the Salisbury Post 9/28/2019

SALISBURY — Kolby Easley stands 6-foot-2 and weighs 190 pounds, so he’s an anomaly in a Catawba receiving corps made up mostly of mighty mites.

When you throw in the fact that Easley can run a 4.6 40, he’s one of Catawba’s more physically imposing players.

“We’ve got a lot of streakers, but Kolby gives us that bigger receiver,” Catawba head coach Curtis Walker said. “And he not only has size, he can run and catch and block.”

As a Northview High phenom in the football-rich military town of Dothan, Alabama, Easley stood out in combine workouts for the Army All-American Bowl. Northview’s team captain, he was chosen to play in Alabama’s North-South All-Star Game. He was a three-star prospect according to major scouting services and shined so brightly in camps that he received offers from Louisville and Mississippi State. Mississippi State recruited him hard for many months.

Easley fell short of qualifying, however, and his tallest dreams were put on hold for a while. On National Signing Day in February, 2016, he had to go the junior college route. He signed with Coffeyville Community College, part of Kansas’ high-powered Jayhawk Conference. When Catawba coaches watched tape of him from the 2018 season he was playing for Fort Scott Community College, one of Coffeyville’s rivals.

“I first heard about Catawba from one of their ex-players,” Easley said. “Then I got calls from the coaching staff. It seems like Catawba is a long way from home, but it’s really only about half as far from home for me as Kansas was. There’s a better chance for my family to see me play.”

Easley is an interesting guy. His second sport in high school wasn’t basketball or track or baseball, it was soccer. He once scored a hat trick against rival Dothan High.

He became a late addition to the Catawba recruiting class in June.

“You never stop looking for players and looking for depth to help build the program,” Walker said. “We wanted to get another receiver.”

The challenge for Easley, a junior psychology major, as a newcomer has been learning the system, learning the playbook, learning his teammates and coaches.

His first receptions came in Week 2 at Winston-Salem State. His first of what Catawba hopes will be many visits to the end zone came against the Rams when he caught a late 2-point conversion pass from Kendall Davis.

Davis, a redshirt sophomore who took over quarterback duties when Ken Avent III was hurt prior to the opening game, has been growing up right along with Easley.

“Kendall is certainly playing well enough for us to win,” Walker said.

Davis’ and Easley’s played high school ball more than two hours apart, on opposite sides of Montgomery . They didn’t know each other in high school, but with their shared Alabama roots, it’s not surprising they’ve developed a bond at Catawba.  Almost all of Catawba’s roster comes from Georgia and the Carolinas.

“I know the area where Kolby is from very well, and I believe our schools have played each other,” Davis said. “I think it’s great that we’re getting him more involved in the offense, and I’ve got a lot of confidence and trust in him. It’s nice to have that big target.”

Catawba is minus two important receivers, with Lovelle Williams going down in the opener and with All-SAC Will Sweeper’s season ruined so far by hamstring issues.

Easley, who is at home at either the slot or a traditional wideout position, has become increasingly important for Davis, who is throwing more and more frequently. Davis’ pass attempts have risen from 11 in his first outing to 39 last Saturday.

At this point, Catawba (1-4) has a better chance for explosive plays in the passing game than in the running game. Davis, who scrambled for 96 yards against Limestone, averages 6.1 yards per carry and has evolved into the Indians’ most feared ground threat.

“Limestone ran a lot of man-to-man pass coverage, and  there was no defender accounting for the quarterback,” Davis said. “That gave me some opportunities.”

Easley made four catches in the loss at UNC Pembroke, had two grabs against Wingate and produced his most impactful game so far with three receptions for a team-leading 51 yards in Saturday’s 52-24 loss at Limestone. He caught the first touchdown pass of his Catawba career on a 24-yard play in the second quarter.

“I was lined up in the slot because I was being used in the slot  some to block a linebacker,” said Easley, whose father played football at Tuskegee University, about two hours north of Dothan. “I just ran a route straight to the pylon and Kendall threw a great ball. All I had to do was run under it.”

That play cut Limestone’s lead to 28-17 and gave the Indians a lift. It was a good moment for two young men from Alabama.

“It was very cool for an Alabama guy to get his first Catawba touchdown on a pass from another guy from Alabama,” Davis said.

Best of all, Easley’s mother had made the 400-mile trip to Gaffney, S.C. She got to see it.

It shouldn’t be the last touchdown catch she sees Easley make.

Catawba might need a couple from him as it makes the trip to Jefferson City, Tenn., to take on the Carson-Newman Eagles.

Catawba will travel Friday and will take on the Eagles (3-1) at Burke-Tarr Stadium on Saturday afternoon at 1:05 p.m.

Both teams have dropped close games to Wingate, but that’s the only thing their seasons have in common. Catawba lost to UNC Pembroke. Carson-Newman demolished UNCP with a 69-point outburst last Saturday.

“Make more plays on offense and play more disciplined on defense, and we’ll give ourselves a chance to win on Saturday,” he said.