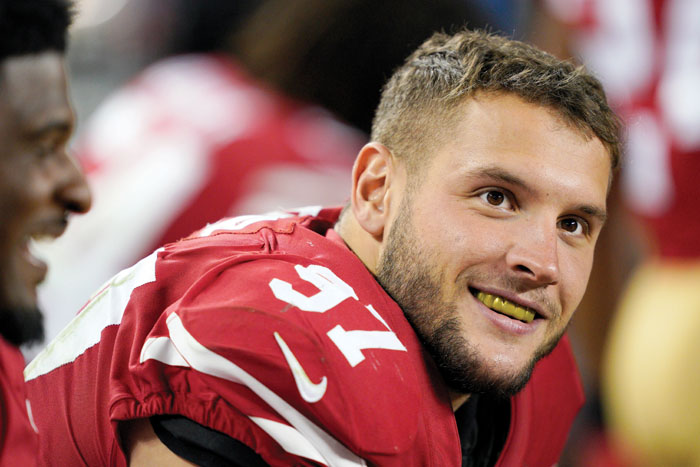 San Francisco 49ers defensive end Nick Bosa (97) smiles on the sideline during the second half of an NFL football game against the Cleveland Browns in Santa Clara, Calif., Monday, Oct. 7, 2019. (AP Photo/Tony Avelar)

SANTA CLARA, Calif. (AP) — For a team that hasn’t had a winning season since 2013, the San Francisco 49ers are taking their 4-0 start this season pretty mildly.

No hoopla or big celebrations. A few handshakes, plenty of smiles and an attitude that the four consecutive wins mean nothing.

“All that’s guaranteed is that we can go 4-12,” tight end George Kittle said. “On a short week we’ve got to try and win this game and get 5-0. Wednesday comes around we will be locked and loaded for the Rams.”

Few people expected San Francisco to be atop the NFC West one month into the season, with both the Los Angeles Rams and Seattle Seahawks looking up. But with three lopsided wins and a close victory over Pittsburgh, coach Kyle Shanahan’s team is one of just two unbeaten teams left in the NFL.

Monday night’s blowout of Cleveland was typical of just how well the 49ers have played this year. They ran for 275 yards, forced four turnovers and made Baker Mayfield look like an undrafted rookie rather than the No. 1 overall pick from last season.

In many ways it was one of the best all-around performances by a San Francisco team in recent memory, although Shanahan was his typical self after the game and talked more about what the 49ers didn’t do than what they did do.

“The league is too hard to be overconfident,” Shanahan said “By no means was perfect. I thought our defense played four great quarters, from the first play to the last play. I think our special teams, obviously struggled. I was real disappointed how the offense finished in the fourth quarter.”

San Francisco’s dominant game on the ground against Cleveland enabled quarterback Jimmy Garoppolo to take a back seat in the offense. Garoppolo still passed for 181 yards and two touchdowns, though the 49ers rarely attacked deep downfield and settled for four field- goal attempts, three of which failed.

Still, the numbers are impressive. After four games, the 49ers lead the NFL in total rushing, are fourth in total offense and second in total defense.

“The opportunities are there for us,” Garoppolo said. “It’s up to us. We’ve got to finish drives. Got caught up a couple times down there toward the red zone in the fringe area. If we finish those drives, it’s going to make it hard on teams.”

Shanahan continued to lean on his three-pronged attack in the backfield, using Matt Breida, Tevin Coleman and Raheem Mostert to wear down the Browns. The three combined for 245 of the 49ers 275 rushing yards, with Breida (11 carries, 114 yards) and Coleman (16-97) doing most of the work. This, while a healthy Jeff Wilson (four touchdowns in 2019) was inactive.

The 49ers would have really pounded the Browns had it not been for some issues on special teams. Kicker Robbie Gould sent a pair of field-goal attempts wide and had a third try blocked. Shanahan indicated that part of the problem came with the snap. San Francisco signed Garrison Sanborn to replace Jon Condo, who retired after one game filling in for Colin Holba, who was recently released.

First-round pick Nick Bosa has played a key role in how well San Francisco’s defensive line has played, and the rookie defensive end had his best game as a pro against the Browns. Bosa had two sacks, five hurries, a forced fumble and a fumble recovery. To hear others on the 49ers front line, the kid is just getting started.

The entire receiving group was pretty much non-existent against the Browns, a recurring theme for the 49ers. Marquise Goodwin (three catches, 41 yards) was the only receiver who caught more than two passes, and there was little downfield threat. Having a tight end such as George Kittle makes it a little easier to handle, but don’t be surprised to see Shanahan and general manager John Lynch make a move to bring in someone who can upgrade the unit.

Fullback Kyle Juszczyk suffered a left knee sprain and will miss four to six weeks. His loss is a big blow, as Juszczyk’s blocking has been critical to the success of the running game.

400. With so much talk about the defense it’s been easy to overlook how productive San Francisco’s offense has been. The 49ers dominated Cleveland on the ground and piled up 446 yards against the Browns, marking the third consecutive game that they’ve gone over the 400-yard mark. The 49ers last did that in 2003.

The 49ers will get the litmus test everyone has been asking for when they travel to Los Angeles to meet the Rams on a short week. “It is time to play division opponents so that is what really matters,” Bosa said. “We are not done.”

BRONCOS CB SAYS HE WAS PARALYZED FOR HALF AN HOUR

ENGLEWOOD, Colo. (AP) — Broncos cornerback De’Vante Bausby says he was paralyzed for half an hour Sunday after wrenching his neck in the second quarter of Denver’s 20-13 win over the Los Angeles Chargers.

“After 30 minutes I could wiggle my toes. After two hours, I could move everything else,” Bausby said Tuesday, hours before being placed on injured reserve.

Bausby collided with linebacker Alexander Johnson while tackling running back Austin Ekeler and crumpled to the grass. He said he never lost consciousness as he was strapped to a backboard, taken off the field on a cart and transported to a Los Angeles trauma center where he was diagnosed with a cervical sprain.

Bausby said he never panicked that he’d be permanently paralyzed because his neurologist reassured him that he’d regain movement.

“I was just calm and I just trusted what our doc was saying,” said Bausby, who was able to walk out of the hospital and rejoin his teammates following their win.

“I was ready to get up out of Los Angeles,” Bausby said. “I was happy to rejoin my team on a plane ride back here.”

Bausby was walking gingerly 48 hours after injuring his neck.

Bausby’s injury was reminiscent of one former Broncos linebacker Zaire Anderson sustained on Jan. 1, 2017, against Oakland when he dived while covering a punt and jammed his neck on a teammate’s hip. Knocked unconscious, Anderson didn’t regain feeling until he was in the ambulance on the way to the hospital.

Isaac Yiadom replaced Bausby but he was benched for Davontae Harris after giving up a 15-yard catch and committing two holding penalties on the next series.

Coach Vic Fangio said Bausby won’t need any medical procedures but is out indefinitely as the team’s medical staff monitors his recovery.

Bausby is hoping to play again this season, although it’s unlikely with the Broncos already having rookie QB Drew Lock, RB Theo Riddick and others on IR. Only two can be reinstated to the roster.

“We’re just going to take it real slow and just gain my strength back,” Bausby said. “So, I don’t really have a timetable, but hopefully pretty soon. My plan is to come back and play.”