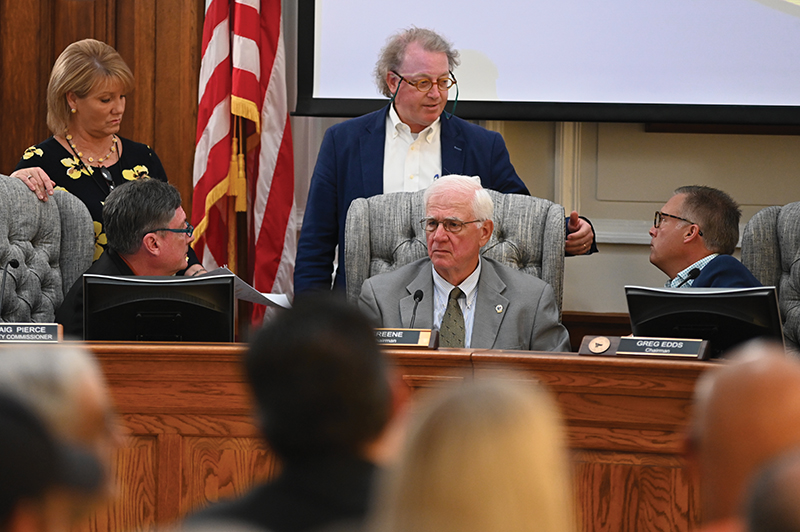 By Josh Bergeron and Terrence Jefferies

The plan for the solar farm drew a standing-room-only crowd to a commissioners’ meeting on Sept. 16. The commissioners heard from developers, attorneys and topical experts about plans to build the facility. The commissioners intended to allow local residents the opportunity to voice their support for or opposition to the plan at a meeting Oct. 21.

But Commissioners Chairman Greg Edds said the county received a letter Monday night in which the developers withdrew the application.

“Board members, through their questions, demonstrated that they were not ready to issue the (conditional-use permit) for this project,” said the letter from Latham Grimes of Cooperative Solar LLC. “Although our experience with solar facilities has caused us to conclude that China Grove Solar would be an asset to the community and not burden neighbors, we hereby request to withdraw the CUP application for the 65-megawatt solar farm submitted by China Grove Solar.”

In their letter, the developers said they’ve worked diligently to develop the property, that solar farms are one of the least intensive uses in rural areas and that proposed buffers would have shielded the project completely from neighbors.

Edds declined to comment further about the decision, saying he thought that was best for the commissioners at the moment.

Local resident Kathy Webb provided feedback on the withdrawal to the Post, saying the community came together in opposition to the solar farm.

“It was really a blessing that they withdrew the application. We fought it as a community, and I am glad they withdrew,” Webb said.

Webb said she believes it is more fitting to place a solar farm on land that has already been zoned industrial, rather than residential or agricultural.

“We’re just extremely thankful that they withdrew it. It was the wrong placement for something like that,” she said. “I am really glad county commissioners decided to do a moratorium and decided to work on placing more restrictions and evaluation criteria for allowing solar farms to come into the county.”

“We’re a residential and agricultural farming community, and we need to protect our beautiful community for our children and our grandchildren,” Webb said.

The withdrawal came as the commissioners implemented a moratorium on new ground-mounted solar farms in Rowan County’s planning jurisdiction, which would not have applied to the 400-acre facility or any within a city’s or town’s municipal boundaries and extraterritorial jurisdiction. Multiple residents who spoke during a public hearing on the moratorium cited the large solar farm and its affect on the nearby environment.

“As the board considers potential new rules for large solar farms in Rowan County, Cooperative Solar would appreciate the opportunity to provide input on behalf of the industry,” said the solar company’s letter. “We stand ready to help if our insights or expertise regarding solar development in North Carolina would be of service. We look forward to investing in Rowan County in the future.”