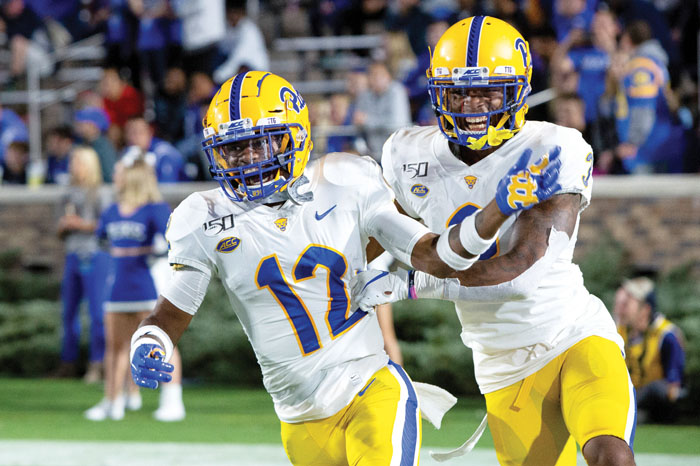 Pittsburgh's Paris Ford (12) celebrates with Damar Hamlin after Ford scored a touchdown after an interception during the first half of an NCAA college football game against Duke in Durham, N.C., Saturday, Oct 5, 2019. (AP Photo/Ben McKeown)

By JOEDY McCREARY AP Sports Writer
DURHAM (AP) — Kenny Pickett threw a 26-yard touchdown pass to V’Lique Carter with 38 seconds remaining, and Pittsburgh rallied to beat Duke 33-30 on Saturday night after wasting a 23-point lead.
Pickett finished 29 of 48 for 268 yards with three touchdown passes to help the Panthers (4-2, 1-1 Atlantic Coast Conference) claim a wild victory — their fifth straight in this Coastal Division series — after the teams combined for 10 total turnovers with each scoring TDs in the final 90 seconds.
Pitt led 26-3 with less than 3 minutes left in the third quarter, only to have the Blue Devils turn three straight turnovers into touchdowns and then take a 30-26 lead on Quentin Harris’ 44-yard touchdown pass to Deon Jackson with 1:30 remaining.
Pickett needed just four plays to put the Panthers back in front. He found Carter over the middle and the Pitt running back got past defensive back Marquis Waters with a spin move on his way to the end zone.
Patrick Jones II then sacked Harris on the third play of Duke’s next drive, jarring the ball loose, and Phil Campbell III recovered it with 22 seconds to play.
Harris finished 18 of 43 for 165 yards with two rushing touchdowns for the Blue Devils (3-2, 1-1). But he had five of Duke’s six turnovers — two interceptions and a fumble during a four-play span of the first quarter, plus a third-quarter fumble in addition to the game-sealer.
Pickett threw TDs covering 19 yards to Taysir Mack and 4 yards to Nakia Griffin-Stewart for the Panthers, and Paris Ford returned one of his two interceptions 26 yards for a touchdown before he was ejected for targeting.
THE TAKEAWAY
Pittsburgh: Trying to avoid their second 0-2 start to ACC play in three years, the Panthers wound up facing the right opponent. They’ve beaten Duke in shootouts (54-45 last year), low-scoring games (24-17 in 2017), blowouts (56-14 in 2016) and mostly close games (for the fifth time in seven meetings, the final margin was 10 or fewer points). Now maybe the reigning Coastal Division champions can think about getting on another late-season roll — none of their final six opponents have a record better than 3-2.
Duke: This one is going to sting the Blue Devils, who were on a roll after a 35-point rout at Virginia Tech eight nights earlier. Ultimately, they’ll rue the onslaught of turnovers that put them in that deep hole to begin with.
UP NEXT
Pittsburgh: Has a week off before visiting Syracuse on Oct. 18.
Duke: Plays host to Georgia Tech on Saturday.
___
For more AP college football coverage: https://apnews.com/tag/Collegefootball and https://twitter.com/AP_Top25