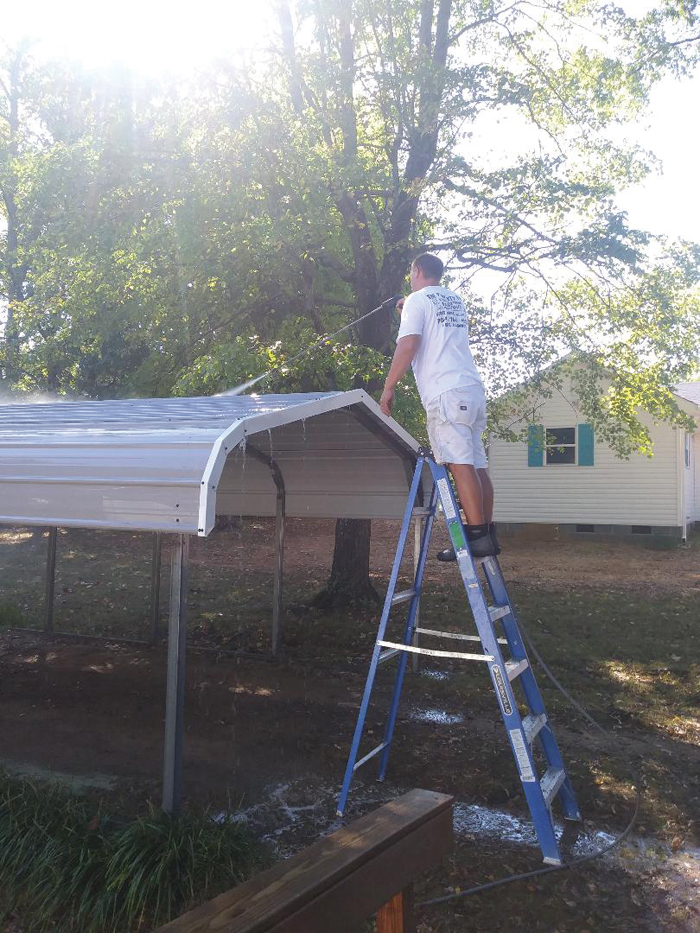 There is a nice young man outside going around our house in a very meticulous fashion. First he moved all my flower pots. Did you get that? He moved ALL my flower pots. Some of those suckers are fork-lift worthy. Then he watered them as a protection from the cleanser he was about to use on the siding. From there he sprayed soap over all the exterior surfaces of the house. Now he is power washing the old white siding until it shines. I feel so rich! And it’s not even my birthday!

We’ve always been do-it-yourselfers. That came naturally since we were way too poor to think of hiring an expert. It’s been the running joke with our daughters to spot something beautiful or crafty and immediately say in unison, “We could make that.” Sometimes it works. Other times not so much.

A few years back David and I rented a pressure washer and did-it-ourselves. By the time we finished I swore to never get sucked into such an adventure ever again. I was soaked and filthy down to my skivvies. Perhaps I stood too close to the house or something. But I’m kinda like a T-Rex with little short useless arms. The back spray was hefty. Two days later I was still finding stuff in my hair. But thanks to Mike, that shall not be the case this time.

My friend Ann and her hubby are also used to doing everything needed around the house. Last month they HIRED a crew to trim some of their massive trees. She too felt rich, especially since she didn’t have to drag off the limbs. That crew even cleaned her patio with a leaf blower. OH! What frivolous luxury!

Mike is almost finished with our house. It’s taken him all morning and though the calendar says it’s fall, the thermometer begs to differ. What a hard worker. People like him are surely a rare breed. Folks tend to idolize celebrities and athletes, actors and actresses. I’ve actually never needed one. But I AM in awe of my plumber. Give me a waitress who pays attention or a man with plumbing skills, or a guy like Mike any day. These fine folks keep the world turning… and more importantly FLUSHING! For people like me who get to hire them, how incredibly blessed we are!

In fact, I’m feeling rather fabulous.