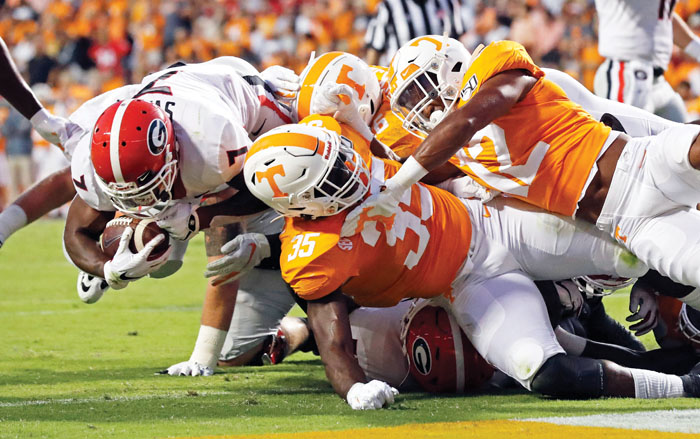 Georgia running back D'Andre Swift (7) dives across the goal line for a touchdown as he is defended by Tennessee linebacker Daniel Bituli (35) and defensive back Shawn Shamburger (12) in the first half of an NCAA college football game, Saturday, Oct. 5, 2019, in Knoxville, Tenn. (AP Photo/Wade Payne)

By STEVE MEGARGEE AP Sports Writer
KNOXVILLE, Tenn. (AP) — Georgia came from behind for a second straight game and continued its recent domination of division rivals.
Jake Fromm threw two touchdown passes, Georgia’s defense delivered a dominant second-half performance and the No. 3 Bulldogs recovered from a slow start to beat Tennessee 43-14 on Saturday night.
Georgia (5-0, 2-0 Southeastern Conference) has won 15 straight matchups with SEC Eastern Division opponents since falling 24-10 to Florida on Oct. 29, 2016.
Georgia trailed for most of the second quarter before scoring two touchdowns in the final two minutes of the first half to take command. That came two weeks after the Bulldogs rallied from a 10-7 halftime deficit to beat Notre Dame 23-17.
“When we see adversity, we want to run straight at adversity,” Fromm said. “That’s what we’re doing right now. We’re taking it in. We’re going out, we’re going to go change something in the game and make it in our favor.”
Fromm went 24 of 29 for 288 yards and threw two touchdown passes in the final two minutes of the first half to turn a 14-13 deficit into a 26-14 halftime lead. Georgia ended up scoring the game’s final 33 points.
Georgia took the lead for good 20-14 on Fromm’s 3-yard touchdown pass to Lawrence Cager with 1:59 left in the half. After Tennessee’s Brent Cimaglia missed a 47-yard field-goal attempt wide left with 59 seconds remaining, Georgia drove again and scored on Fromm’s 7-yard pass to George Pickens with nine seconds left.
“We pushed them a little bit there in the first half,” Tennessee coach Jeremy Pruitt said, “(and) they did what good teams do.”
Georgia’s Rodrigo Blankenship made field goals from 50, 34 and 27 yards to improve to 11 of 11 this season. Brian Herrien and D’Andre Swift combined to run for 160 yards and each had a 1-yard touchdown run as Georgia outrushed Tennessee 238-70.
“We’ve got a big physical football team,” Georgia coach Kirby Smart said. “We’ve got to keep getting better and get rid of some of the errors.”
Tennessee (1-4, 0-2) has lost its last six matchups with Football Bowl Subdivision teams and is off to its slowest start since 1988, when it dropped its first six games. Tennessee’s lone win this season was a 45-0 blowout of Football Championship Subdivision program Chattanooga.
But the Volunteers made this one interesting for a while.
Tennessee freshman quarterback Brian Maurer made his first career start and sparked an offense that had stumbled and staggered through the first month of the season. Pruitt wouldn’t say whether Maurer would start again next week or if the Vols might go back to Jarrett Guarantano, who started the first four games.
“I’ll have to watch film,” Pruitt said. “I don’t know. I think Brian competed really hard. I thought Jarrett did a good job when he was in there. It was good for both of them.”
Maurer electrified the crowd on Tennessee’s second series as he executed a play-action pass to a wide-open Marquez Callaway, who made the catch around the Georgia 30 and raced to the end zone for a 73-yard touchdown. Maurer’s 12-yard touchdown pass to Jauan Jennings on the first play of the second quarter put Tennessee ahead 14-10.
Jennings had seven catches for 114 yards, and Callaway caught three passes for 105 yards. Maurer was 14 of 28 for 259 yards with an interception to go along with his two touchdowns.
Maurer got less effective as the night wore on. On Maurer’s final play of the night, Eric Stokes sacked him and knocked the ball loose, enabling Tae Crowder to score the game’s last touchdown on a 60-yard fumble return with 4:38 left.
THE TAKEAWAY
Georgia: The Bulldogs made some uncharacteristic mistakes early but eventually wore Tennessee down by controlling possession for 36-plus minutes. It helps to have a quarterback the caliber of Fromm, who hasn’t thrown an interception all season. Georgia still hasn’t allowed a touchdown run all season.
Tennessee: The quarterback change gave Tennessee an energy boost to start the game and enabled the Vols to outplay Georgia for the first 25 minutes or so. But the offense slowed down quite a bit in the second half and the defense couldn’t put any pressure on Fromm.
POLL IMPLICATIONS
Georgia probably played well enough in the second half to stay in the No. 3 spot.
KEY STAT
Late in the second quarter, Maurer was 10 of 17 for 205 yards with two touchdowns. He was 4 of 11 for 54 yards with one interception and a fumble the rest of the way.
UP NEXT
Georgia hosts South Carolina on Saturday.
Tennessee hosts Mississippi State on Saturday.
___
More AP college football: https://apnews.com/Collegefootball and https://twitter.com/AP_Top25
___
Follow Steve Megargee at https://twitter.com/stevemegargee