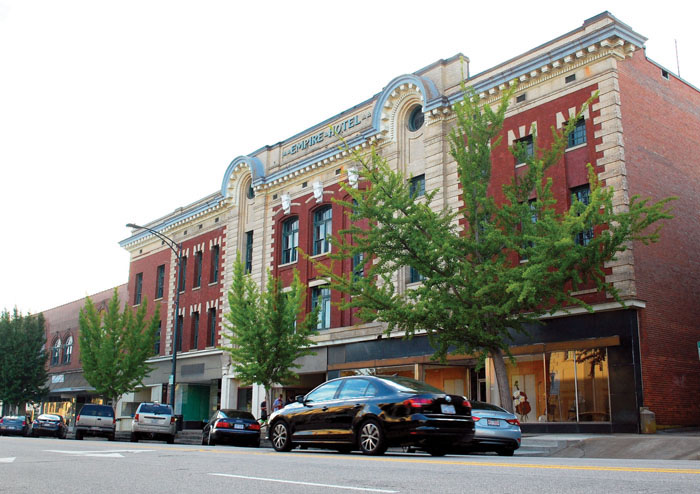 A tour of the Empire Hotel redevelopment project is planned as part of a visit by White House officials to learn about opportunity zones in Salisbury on Tuesday. Andy Mooney/Salisbury Post file photo

The 20-minute tour will start at City Hall and travel to the four census tracts, including near Rowan-Cabarrus Community College and East Spencer and Spencer, encompassing some of the West End, Kesler Mill, Cone Mill and Hill Street areas. The tour will end at the Empire Hotel, where developer Britt Weaver will lead a tour. The roundtable discussion will begin at 11 a.m. in City Council chambers.

The roundtable will be facilitated by Scott Turner, executive director for the White House Opportunity and Revitalization Council, and Ja’ron Smith, special assistant to the president and director of urban affairs and revitalization. The public, along with city officials and Weaver, will be able to ask questions.

Heggins said she made a connection with William Crozer, special assistant to the president and deputy director of the White House Office of Intergovernmental Affairs, at the White House Summit for Women Mayors in 2018. She spoke to Crozer at subsequent conferences. After at the U.S. Conference of Mayors summer meeting, he emailed asking for more information about the Empire Hotel revitalization project.

“I’m so happy to have been able to make that contact and for him to take interest in Salisbury, because hopefully this is going to help us with our opportunity zones,” Heggins said.

Heggins said because there is special interest in Salisbury, it means there is great potential for the city. The White House visit also symbolizes that the federal government is on board to improve the city’s chances for receiving grants.

“It helps us to look at a way to build community wealth throughout our city,” Heggins said. “It’s not just for downtown. It’s for the entire opportunity zone that encompasses so many different areas in our city.”

Heggins said she is interested in hearing more about how the city can start an opportunity zone fund that can help with affordable housing.

Elected officials, educators, business owners, clergy, homeowners and community stakeholders will be part of Tuesday’s tour. The roundtable discussion will be open to the public.

Anyone who wants to submit a question about opportunity zones and how they relate to Salisbury can email them to al.heggins@salisburync.gov.