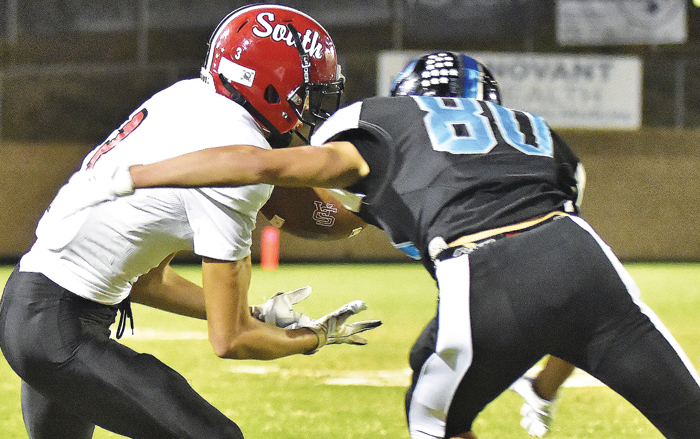 Oak Grove's Max Hester (right) goes in for the tackle as South Rowan's Austin Peacock is about to catch a pass Friday night at Oak Grove. Oak Grove won the game, 52-6. ... Photo by David Yemm for The Dispatch

Aiden Shewcow ran for 231 yards and four touchdowns Friday night as the undefeated Grizzlies routed South Rowan, 50-6, to remain in a three-way tie for first place in the Central Carolina Conference.

It was an 8-6 game in the second quarter and 22-6 at halftime, before the Grizzlies got untracked to stay unbeaten.

“Obviously, it’s better than the alternative,” said Oak Grove coach Mark Holcomb. “But we didn’t play well, especially early. (We) gave up a couple of third down conversions, a long pass. To their credit, they made some changes on offense and moved the ball a little better.”

Moving the ball ultimately wasn’t a problem for the Grizzlies.

Shewcow scored on runs of 6, 3, 8 and 45 yards. The junior tailback now has 1,028 yards and 14 touchdowns for the season. Seth Blair had a 1-yard touchdown run and Nathaniel Spaugh ran 2 yards for a touchdown.

“I thought we ran the ball really good,” Holcomb said.

The Grizzlies also made enough plays through the air to matter.

“We had a big completion,” Holcomb said. “Hunter had a really good game.”

Shewcow’s third touchdown extended the lead even more in the third quarter and the Grizzlies kept right on going.

“We played much better in the second half,” Holcomb said. “Much better.”

Oak Grove (6-0) has now outscored its opponents by a combined 290-45 for the season. The Grizzlies host undefeated Salisbury (6-0) in a showdown between two of the CCC’s three first-place teams. Oak Grove, Salisbury and Ledford are all 4-0 in the conference.

Receiver Nathan Chrismon scored the lone touchdown for South Rowan, which fell to 1-5 overall and 1-3 in the CCC.

NOTES: Mason Grubbs ran in a pair of two-point conversions and Shewcow had one. … Brandon Fitzgerald kicked three extra points. … Blair had 70 yards on 5 carries. … Tanner Tesh forced one fumble and recovered another. … Max Hester forced a fumble. … Nikolas Everhart, Jordan Bogue, and Dylan Barker were defensive standouts for the Grizzlies.