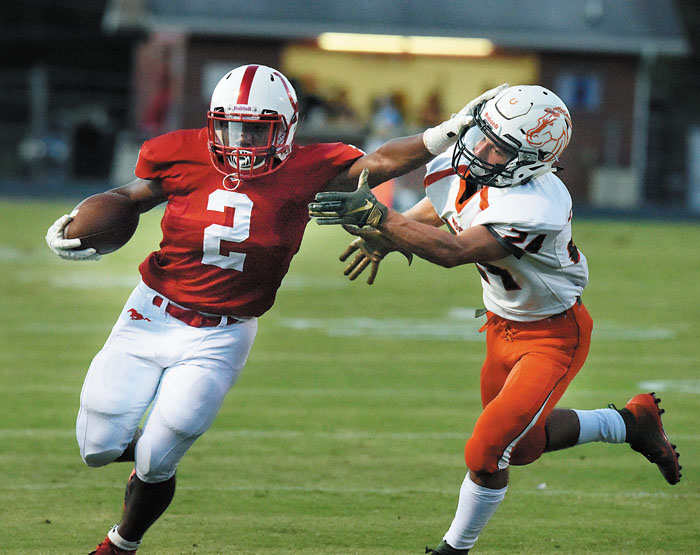 East Rowan's Sammy Pinckney (2), shown during a game against East Lincoln, rushed for 267 yards on Friday night in a 27-20 win over Mt. Pleasant. ... File photo by Wayne Hinshaw, for the Salisbury Post

GRANITE QUARRY — East Rowan running back Sammy Pinckney rushed for 267 yards during Friday night’s 27-20 win over Mt. Pleasant, but still wasn’t the star of the game.

The Mustangs’ defense, despite allowing 474 total yards to the Tigers, came up big in their own end zone — twice. Without forcing two turnovers when it did, East could have trailed early, 21-0.

“The turnovers were the name of the game, but the thing I love about our kids, is that was a team win,” said East head coach John Fitz. “We played well on special teams, except the opening kickoff, played good on defense, getting stops when we needed to get stops and on offense, we scored when we needed to score.”

Mt. Pleasant’s first play from scrimmage was a halfback option pass that went for 40 yards. Three plays later, the Tigers were in the end zone for a 7-0 lead.

The Tigers (2-5) then converted a successful onside kick and had the football at the East 47-yard line. While the Mustangs’ offense wondered when it would get onto the field for the first time, Mt. Pleasant strolled to the Mustangs’ 12 in three plays.

On the verge of going up, 14-0, Mt. Pleasant quarterback Ryan Tyson tried to thread a pass into the end zone but he found East safety Isaac Hinceman for an interception, saving the game for the moment.

East’s offense, finally getting to play a little, managed only 20 yards and had to punt. The Tigers immediately started marching again, from their own 21-yard line to the East 8, in 10 plays — as the first quarter ended. Total yards in the opening period: Mt. Pleasant 163, East Rowan 5.

However, on the first play of the second period, Mt. Pleasant running back Dalton Miller appeared headed to the end zone, but the other East safety, Braeden Moore, made a play. Moore forced a fumble and cornerback Caleb Jarvis recovered as it rolled into the end zone.

“The ball just came my way and I went for it,” said Jarvis, who later, also had an interception. “Braeden forced it out and as soon as I saw it, I just went for it. He actually went for it, too, and we smashed into each other pretty hard.”

With new life — again — the East offense took the cue from the defense. County rushing leader Pinckney, who had zero yards during East’s first drive, had first-down runs of 10, 10 and 37 yards. Suddenly, East was at the Mt. Pleasant 23-yard line.

Pinckney came out for a breather after the 57 yards on three carries and quarterback Logan Forbis fired a perfect pass to receiver Vincent Jones on the next play, cutting the deficit to 7-6. Kicker Cole Eagle’s extra point was wide of the mark.

The East score fired up the Mustangs’ defense even more. The Tigers picked up two first downs, but East stiffened and forced a punt and the Mustangs had the ball back with 6:46 left in the half.

East chewed up 80 yards in just seven plays, with running back Isa’ah Cauthen scoring from 12 yards out, after Pinckney made the key play of the drive — a 29-yard burst to the Mt. Pleasant 18.

Now up 12-7, with 4:15 left in the half, it was time for another big play from the defense. The Tigers had driven to midfield, and despite the running game producing chunk-yardage, Tyson tried a pass near the East sideline. Jarvis was waiting and made the interception that kept his team ahead at intermission.

“They had two receivers on my side and when my guy stopped, I broke on the ball and it just came to me,” said Jarvis. “I was thinking ‘pick-six,’ but there were too many people there to get through.”

Mt. Pleasant made another mistake as the third period began, kicking off out of bounds. Starting on the 40-yard line, East marched 60 yards in nine plays, Cauthen again going in, this time from six yards out. Eagle booted the PAT and East led, 19-7, just four minutes into the second half.

After rare three-and-outs for both teams, Mt. Pleasant had an impressive 10-play drive to cut the East lead to 19-13.

East then suffered its only turnover of the game when Tiger DB Sawyer Osborne made a spectacular interception of a Forbis pass near midfield. But the defense once again came to the rescue, stopping Mt. Pleasant on downs with a goal-line stand. The Tigers had four plays from the East 12-yard line, but came up a yard short.

That set the stage for Pinckney to supply the dagger. After a yard from Pinckney and five from Cauthen, East faced a third-and-four at its 9-yard line. Pinckney took a pitch, went left, then cut back to the middle, going 91 yards for a TD. Cauthen added a two-point conversion for a 27-13 lead, with 8:48 remaining.

“Somebody blocked the linebacker — I think it was (fullback) Mateo Ramirez, and I saw that lane,” Pinckney said, of the long run. “After that, I just made one move on the safety and I’m gone.

“The offensive line (Dylan Courtney, Josh Samoa, Dylan Goodnight, Josh Teeter and Colby Lovingood) did an excellent job all night,” continued Pinckney. “They were opening holes and I was seeing them. And my other fullback, Bryce (Carden), was big in leading me through holes.”

Mt. Pleasant scored on a 40-yard pass play from Tyson to Layton Honeycutt for the final margin, but only 2:11 remained in the game. East ran out the clock, with a big first-down run of 3 yards from Cauthen to ice it.

Remarkably, only one yard separated the two offenses on the ground. Pinckney and Cauthen (56 yards) led East to 330 yards on 38 carries, while the Tigers, led by 111 yards from Brent Reece and 109 from Tyson, rushed for 331 yards on 52 attempts. Aided by Pinckney’s 91-yarder, East’s ground attack averaged 8.7 yards per carry.

The Tigers also had 143 yards through the air, while Forbis threw for 46.

“We made a few adjustments after their first couple of drives, because they were running the ball at will early, there’s no doubt,” said Fitz, who added that three of his assistant coaches used to be at Mt. Pleasant. “There are a lot of similarities between these two teams. They knew what we were going to do and we knew what they were going to do, so it was just a matter of who was going to do it the best.”

Fitz was also pleased with the line play on both sides of the ball.

“The OL has been getting better and it played very good tonight,” Fitz added. “And the defensive line played a lot better than they have the last couple of games. We made plays when we had to. We haven’t been doing that consistently but we did tonight.”

“After what we’ve been through these last couple of weeks, this was big for these kids,” said Fitz.