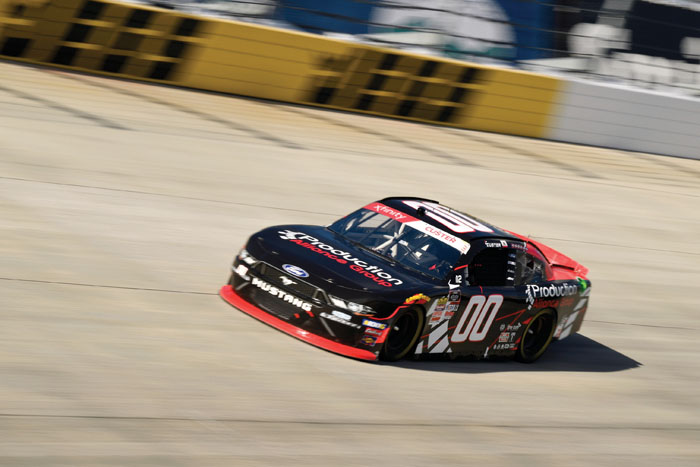 Driver Cole Custer (00) comes out of turn one during stage one of the NASCAR Xfinity Series auto race, Saturday, Oct. 5, 2019, in Dover, Del. (AP Photo/Brien Aho)

The 21-year-old Custer, who made his 100th start, proved as a top contender for the title as NASCAR’s second-tier series gets set to move into the next round of the playoffs. Custer started from the pole in the No. 00 Ford for Stewart-Haas Racing and led 31 laps to win for the time since August.

“I wanted to win here so bad for so long,” Custer said.

Custer, Christopher Bell and Tyler Reddick have combined to win 19 of the 29 Xfinity Series races. Bell and Reddick are each making the move to the Cup Series next year, while Custer’s future is uncertain.

“We just haven’t been able to close this year,” Nemechek said. “I feel like that’s been one of our struggles.”

Jones had his bid to race his way into the second round spoiled on an accident in the opening lap.

“I always try to find the positives with this kind of stuff,” Jones said. “None today.”

Custer, Bell and Reddick are joined in the next round by Michael Annett, Justin Allgaier, Noah Gragson, Austin Cindric, and Chase Briscoe.

“That is two weeks in a row I feel like we had the best race car and didn’t get the win,” said Briscoe, who led 71 laps. “There are so many circumstances that go into winning these races and one little thing that you don’t catch at the right time just kills you.”

The next round starts in two weeks at Kansas Speedway.

Wallace met with NASCAR officials on Thursday in the wake of tossing his drink at Bowman after the race ended last week at Charlotte Motor Speedway. Wallace said his frustration stemmed from previous run-ins with Bowman on the track and again early in the race on the Charlotte Roval. Wallace, who drives for Richard Petty Racing, was not punished.

“I’d been run over multiple times by that car and I’d had enough,” Wallace said Saturday at Dover.

Bowman desperately tried to avoid elimination from the playoffs last week at Charlotte Motor Speedway. He wrecked his fast car in the closing minute of the final practice session, spun on the opening lap, and deliberately spun Wallace because he didn’t like Wallace flipping him the bird.

On a day with scorching temperatures, Bowman climbed from his car and slumped to the ground, dehydrated and overcome by the heat. Wallace found him sitting next to his car, surrounded by NASCAR’s medical director and Jeff Gordon, and angrily splashed liquid in Bowman’s face after a brief verbal exchange. Gordon and the medical director were splashed.

Wallace said he texted Gordon hours after the incident and eventually the other bystanders.

“If he was just sitting down trying to catch his breath and no one was around, he would have been OK,” Wallace said. “I agree with the fans. Bringing Jeff Gordon (and others) involved, that’s where we crossed the line there. It could have been handled at a different time. Emotions run high.”

Bowman finished second in the race to advance to the second round of the playoffs.

Bowman said he hasn’t talked with Wallace about the incident and downplayed any potential for retaliation on the track.

But it was good for a laugh at Dover: Corey LaJoie playfully tossed water on Bowman during a media scrum.

Daniel Suarez said he was close to signing a contract to return to Stewart-Haas Racing for a second season.

Suarez, a former Xfinity Series champion, missed the playoffs and is 17th in the standings headed into Sunday’s race. He spent his first two seasons with Joe Gibbs Racing before he was let go.

“Hopefully, in the next few weeks we’re going to have things more clear,” Suarez. “Everything is looking good.”

Daniel Hemric is looking for a 2020 ride after Richard Childress Racing decided not to bring him back after just one season. RCR decided to promote Xfinity champ Tyler Reddick for next year instead. Hemric considered a candidate for the open seat at JTG Daugherty Racing that opened last week when Chris Buescher jumped to Roush Fenway Racing.

“I’m just trying to make sure I land on my feet,” Hemric said. “There’s just a ton that goes into something like this. I think the entire industry was shook up last week. I’m definitely nearing crossroads here where I have to make a decision. I think there’s a good path, there’s just a matter what trail you want to go down.”

Dover International Speedway remains the only track that allows sports gambling on its property. Kyle Busch was a 9-2 favorite.

The Delaware Lottery said the total racing handle was $338,900 since June 1, 2018. That represents 0.17% of the total handle wagered in the same timeframe. Tennis and boxing are the only sports with a lower percentage of handle. There have been less than 1,500 wagers totaling less than $16,000 on the current Cup championship. The driver with the most wagers is Denny Hamlin with less than 70. The state would retain the most money if Martin Truex Jr. wins the championship and lose some money if William Byron wins the Cup title.

Dover opened its new $5.5 million Cup garage, which included 44 large garage bays and increased the footprint by 22%. The old garage area had been in place since the Monster Mile’s first race on July 6, 1969, and was the smallest — and scariest to maneuver for fans and drivers — in NASCAR.

Eddie Wood, co-owner of Wood Brothers Racing, remembered a time in the early 1970s when crew chief Harry Hyde pranked some guys in the garage. Hyde, a former crew chief who inspired the Harry Hogge character in “Days of Thunder,” shot a Browning 25 pistol for fun that scared everyone. Hyde acted like he was just as surprised as everyone to sell the gag.

“What gave it away was the end of the gun barrel was sticking out the back of his pocket,” Wood said, laughing. “He didn’t stop there. Everybody was laughing and he was kind of running around like he was acting scared. He goes back to the center of the garage and that’s when he shot in the roof. Just to make more noise.”

Dover saved the part of the roof and will take it the Hall of Fame after race weekend.

“There were a lot more practical jokes in those days,” Wood said. “Now you get in trouble.”