A week after Clemson, UNC takes solid win over GT 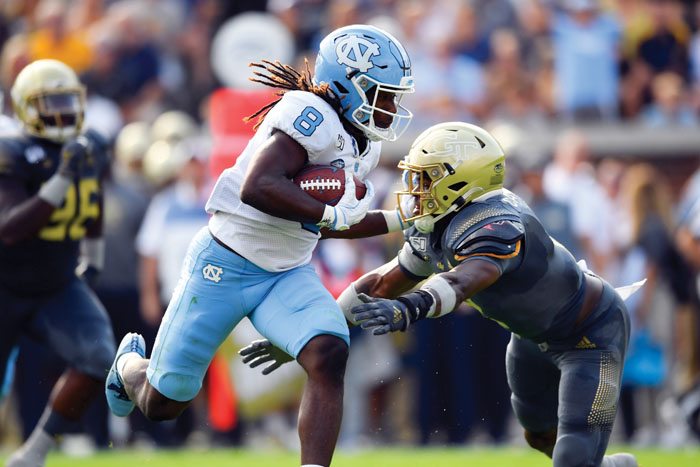 North Carolina running back Michael Carter (8) rushes against Georgia Tech defensive back Tariq Carpenter during the first half of an NCAA college football game Saturday, Oct. 5, 2019, in Atlanta. (John Amis/Atlanta Journal-Constitution via AP)

The Tar Heels (3-3, 2-1 Atlantic Coast Conference) won the game convincingly, going up 24-7 early in the final period on Howell’s 18-yard TD pass to Dyami Brown in the left corner of the end zone and 31-15 on the next possession when tight end Garrett Watson caught a short pass near the right sideline and scored a 16-yard touchdown.

Georgia Tech (1-4, 0-2) has lost three straight with the nation’s lowest-scoring offense and had gone seven quarters without a touchdown before cutting the lead to 17-7 in the third quarter.

Redshirt freshman James Graham made his first career start for the Yellow Jackets and shared early snaps with running QB Tobias Oliver. The offense took a big blow early in the second when Graham threw a deep interception to Don Chapman at the Tar Heel 32. North Carolina scored its first touchdown on the ensuing drive.

North Carolina led 17-0 at halftime on Noah Ruggles’ 32-yard field goal, Dazz Newsome’s 20-yard touchdown catch and Beau Corrales’ 6-yard TD reception. Outside linebacker Tomon Fox had a sack in the second and nose tackle Aaron Crawford had a sack in the third.

North Carolina: The Tar Heels, who were coming off a one point loss to then-No. 1 Clemson, still have plenty to clean up. Newsome, Rontavius Green and Brown dropped long passes near the goal line in the first half, and there were more hiccups in the third. A penalty pushed the offense back, and Ruggles missed wide right on a 39-yarder. Brown dropped an easy pass on the next drive and the Tar Heels went three-and-out, but the blowout was sealed when Javonte Williams’ 3-yard run made it 38-15.

Georgia Tech: The Jackets had won nine of the last 10 home games in the 40-year series, but didn’t give the announced crowd of 45,044 much to cheer about other than Graham’s 28-yard TD pass to Malachi Carter and Jordan Mason’s 2-yard TD run in the fourth that cut the lead to 24-15 on a two-point conversion. Georgia Tech has yet to score in the first quarter this season.

The Tar Heels starting strong safety Cam’Ron Kelly had surgery for a torn ACL Thursday and will miss the rest of the season. Kelly was injured in the closing minutes against Clemson. It got worse for the secondary in the first quarter when starting cornerback Trey Morrison left with an upper body injury and was done for the day.

North Carolina is off next week and visits Virginia Tech on Oct. 19.

Georgia Tech visits Duke next week and Miami on Oct. 19.