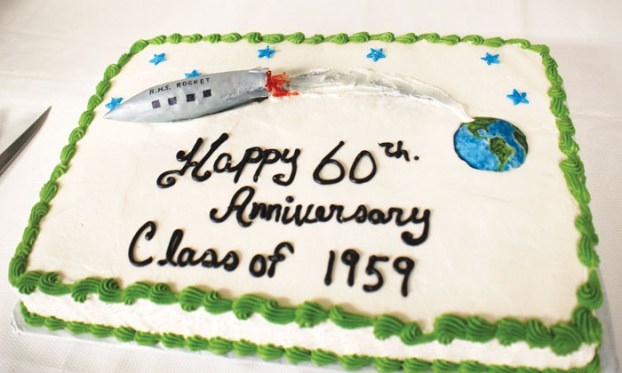 Class of 1959 member Ann Brown Miller fashioned this cake in the green-and-white colors of Rockwell High, whose sports teams were the Rockets. Ann's husband, Clarence, carved the rocket for the cake. Mark Wineka/Salisbury Post

“They will always be remembered now.”

— Ronnie Smith, a Vietnam War veteran who has worked for nine years to see the Rowan County Vietnam Veterans Memorial come to fruition, after granite panels bearing the names of those who died in that war and the two world wars were installed at the Patriots Flag Concourse and Memorial on Wednesday

“I encourage you all to find that thing that makes you.”

— Alexandra Badgett, Miss North Carolina 2019, speaking to students at Livingstone College on
Wednesday during an induction for student government officers

“Deep down, I’ll always be a Bulldog. I love this place, and it was good to me.”

— Erich Epps, the football coach at West Rowan Middle School for 31 years, who was honored when the football field was named for him last week

“It was fun to see all the kids smiling. That’s what it’s all about.”

“It felt good to have a breakout game. It was a long time coming, but I’m hoping to have a few more like it.”

— Gavin Rose, a fifth-year senior on the Catawba College football team, whose key receptions last weekend in the Indians’ 13-10 loss to Wingate provided some bright spots in a losing effort

“Do you remember when we thought 30 was old?”

— Carolyn Cauble Hartung, who was among more than 40 alumni and spouses who attended the 60th reunion of the Class of 1959 of Rockwell High School

For any community, a looming layoff of 450 local workers might be something from which it might not recover. That’s... read more