High school football: How big a deal is 5-0? 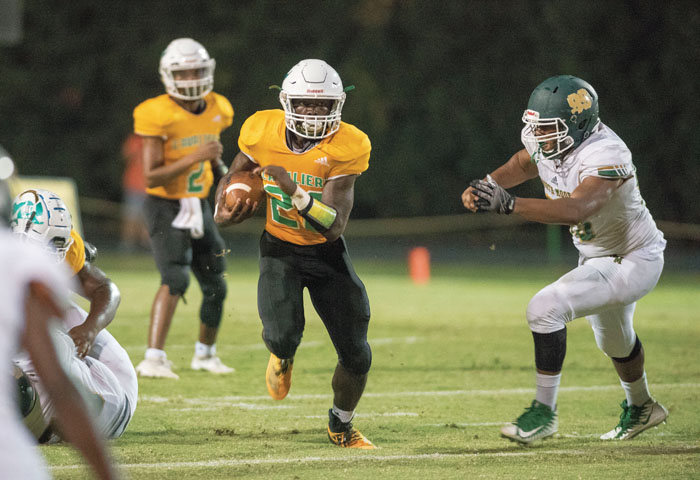 Salisbury Hornets Five-0, doesn’t have quite the same ring to it as Hawaii Five-0, but the Hornets’ 5-0 start is a big deal for a lot of people, especially with none of the other football teams in Rowan County above break-even.

Of course, North Rowan (3-3) has an opportunity to change those numbers tonight at home. West Rowan (2-3) should get back even tonight at Concord. As far as East Rowan (2-3), who knows how the Mustangs will fare, but maybe they’ll be inspired tonight for homecoming against Mount Pleasant. East is about a touchdown underdog and certainly has a good chance.

Unless something amazing happens, Carson (2-4) and South Rowan (1-4) will slip further from the .500 mark tonight. The folks who analyze these things mathematically tell us Carson has a 2 percent win probability tonight at A.L. Brown, while South has a 7 percent chance at Oak Grove.

But back to Salisbury.

Is 5-0 really something to get all that fired up about? Well, yes … and no.

Look at it this way. Would West Rowan be 5-0 if it had played the same schedule as Salisbury?  Yes, the Falcons would be.

Most of the teams considered elite teams in 2A have a loss at this point. That includes Shelby and Reidsville. Shelby got beat by Kings Mountain, which might be the best in 3A.  Reidsville lost 55-49 to East Surry, one of the top two teams in 1A.

The most highly regarded 2A team that remains undefeated is Randleman, which is head-coached by former Catawba assistant Shane Handy.

All a 5-0 start means mathematically is you can’t do worse than 5-6 in the regular season.

In Salisbury’s case, this 5-0 start should mean that an 8-3 season is the worst-case scenario.  Maybe the Hornets will go 11-0, but that will take some doing.  There are a string of tough road trips coming up.

The three best teams in the Central Carolina Conference, other than Salisbury, are Oak Grove, Ledford and North Davidson. Salisbury plays all three on the road. Oak Grove, which already owns a victory against North Davidson, has to be taken very seriously even though the Grizzlies are in their second season of varsity football.

The good news for Salisbury head coach Brian Hinson and his staff is that the folks who rank teams are making it easy for the Hornets to stay humble, even as their defense pounds the living daylights out of people.

MaxPreps ranks the Hornets 20th in 2A. That’s not all that flattering.

CarolinaPreps doesn’t rank the Hornets in the top 20 in 2A.

High School OT ranks a top 25 in the West (for all classifications). The Hornets aren’t in there, and they shouldn’t be.

Let’s take a look at the last 5-0 start by each local school and see where it led. One thing the list tells us is 5-0 starts don’t grow on trees. They are at least somewhat unusual.

• South Rowan hasn’t started 5-0 since 1976. I would’ve thought some of those 1980s South teams would’ve started out 5-0, but there was a stretch where the Raiders were outstanding but would lose the opener to North Rowan every year. The 1976 Raiders lost Game 6. They finished 7-3-1 and lost in the first round of the WNCHSAA postseason.

At East Rowan, the last time the Mustangs started 5-0 was in 1969, 50 years ago. Everyone knows how that one turned out. The Mustangs went 13-0 and won the WNCHSAA.

• Carson’s last — and only — 5-0 start also came in 2010. The Cougars fell to Statesville in their exciting sixth outing. They finished 10-3 and won a playoff game.

• North Rowan had a recent 5-0 start — in 2013. That team won its first 13 before losing to Shelby in the third round of the playoffs.

• As for Salisbury, the most recent 5-0 start was back in 2008. Salisbury won its first 11 that year, but that also was the year of the forfeits. Late that season, the Hornets forfeited four games. They hit the road for the first round of the playoffs and lost at Pisgah, 17-14. Officially, they went 7-5, but that doesn’t come close to reflecting how good that team was.

Scheduled games tonight are: West Rowan at Concord; Carson at A.L. Brown; Central Davidson at Salisbury; South Stanly at North Rowan; Mount Pleasant at East Rowan, and South Rowan at Oak Grove. Davie, which has had a season’s worth of excitement in its first six games, is off.

This week’s picks are very similar. We all predict victory for West Rowan, A.L. Brown, Salisbury, North Rowan and Oak Grove, but Marny likes the Mustangs to beat Mount Pleasant. Scott and I took the Tigers.

North Rowan is going for the 400th win in school history and is favored by about three touchdowns.

North’s defense, with Jordan Goodine in the middle of it,  is solid and the offense is coming along. QB Kyree Sims is getting better each game, and Malcolm Wilson is still Malcolm Wilson.

This hasn’t been an easy series to figure out. The Cavaliers beat South Stanly, which always has good skill athletes, by  a single point in 2017.  But last year, North mauled South Stanly, 42-0.

Whoever wins becomes one of the favorites in the Yadkin Valley Conference.

Oak Grove is one of the great stories in North Carolina football this year, although it’s not entirely shocking. The Grizzlies were decent in their 2018 debut and basically have everyone back.

One of Oak Grove’s five victories in its first year of competition came at South Rowan in a 17-14 struggle.

Not many people believe South can hang with the Grizzlies this year. Oak Grove is favored by 27.

Oak Grove throws about 10 times a game and relies mostly on a punishing ground game. Except for the East Davidson game which it won, South has allowed lots of rushing yards.

Central Davidson is given a 14 percent win probability for this game, but it’s hard to see anything going wrong for the Hornets.

While 18 points have been scored against Salisbury this season, no one’s had anything close to a scoring drive yet.

Central Davidson lost to Oak Grove 49-7 last week. Central Davidson is averaging quite a few points, but that’s mostly because it scored 117 in the first two weeks against 1A opponents.

The Spartans won against Salisbury by forfeit in 2008, but haven’t beaten the Hornets on the field since 2002.

West returns to action after a week off.

The Falcons are favored by 9 points and are given a 70 percent win probability by the Massey Ratings system.

Look for West back Jalen Houston and the Falcon’s offensive line to take charge of this one.

Concord leads the all-time series 16-6, but the two most relevant meetings as far as this game were the last two. West beat the Spiders in 2017 and 2018.

This is a pretty good rivalry. It grew when the teams squared off in the state playoffs three straight years from 2010-12.

On paper, at least, this should be one of the better games of the night.

Mount Pleasant doesn’t have a stellar record but has lost to some of the strong teams in Cabarrus County such as Northwest Cabarrus, Central Cabarrus and Cox Mill. Mount Pleasant has won against Concord and South Stanly.

East quarterback Logan Forbis was out last week when the Mustangs were clobbered at West Stanly. On Wednesday of this week, he was “questionable.” If he can play, East has some balance on offense. If he can’t, East will have to rely on workhorse Sammy Pinckney running the ball 80 percent of the time behind a stout offensive line.

It will be a major surprise if that changes.

Carson plays with lots of energy, but athletically, the Wonders have more speed, more size and more bodies.

The Wonders are 34-point favorites. Look for something in that 42-14 territory again.