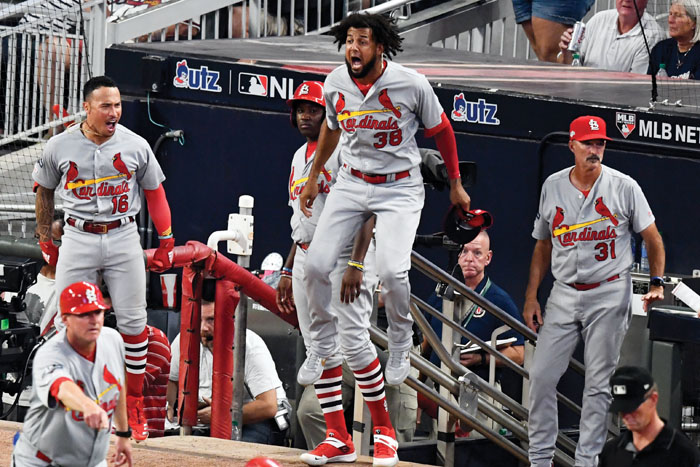 ATLANTA (AP) — Back in the playoffs for the first time since 2015, the St. Louis Cardinals look as gritty as ever.

The Atlanta Braves also started down a familiar path.

Marcell Ozuna and Kolten Wong each hit two-run doubles in the ninth inning as the Cardinals overcame shaky defense and a wild finish to extend Atlanta’s postseason misery, holding off the Braves 7-6 in Game 1 of the NL Division Series on Thursday night.

The Cardinals fell behind 3-1 _ hurt by their normally reliable defense. But Paul Goldschmidt homered in the eighth, sparking a two-run outburst that tied it 3. In the ninth, the Cardinals blew it open against Braves closer Mark Melancon.

Dexter Fowler and Tommy Edman singled before Goldschmidt walked on four pitches to load the bases with one out. Melancon got ahead of Ozuna with two quick strikes, only to give up a liner just inside the third-base bag that put St. Louis ahead for the first time.

Wong finished off Melancon with another two-run double, this one down the right-field line.

“These are fun, exciting games,” said Matt Carpenter, who came through with a pinch-hit bloop single off Melancon to tie the game in the eighth. “Every out, every pitch is important. There’s a lot of adrenaline involved, but that’s what you play for, that’s why you’re here.”

During a run of nine playoff appearances from 2004-15, the Cardinals were known for their postseason heroics, most notably rallying for a dramatic World Series win over Texas in 2011.

This team looks ready to follow in that mold.

The Braves are stuck in a nightmare that seems to repeat itself every October.

Atlanta has lost nine straight playoff series and is just one away from tying the Chicago Cubs’ record for postseason futility _ 10 postseason losses in a row between 1908 and 2003. Atlanta has not won a postseason series since 2001, and hasn’t even led a series since going up 2-1 on San Francisco in the 2002 NLDS. The Giants won the next two games to advance.

To their credit, the Braves didn’t go quietly in their half of the ninth.

“We’ve played all season expecting to win those type games,” Freeman said. “You give up that kind of lead, it’s tough to swallow.”

The Braves snapped a 1-1 tie in the sixth when Dansby Swanson slashed a wicked one-hopper that bounced off the chest of third baseman Edman. The ball deflected to shortstop Paul DeJong, who had a chance to get a force at second base for the third out. But the throw to Wong was a bouncer, the ball shooting off his glove for an error as two runs scored.

Wong also messed up an attempted backhanded toss for an error in the first, helping the Braves grab a 1-0 lead.

It was totally uncharacteristic for a Cardinals team that led the majors during the regular season with just 66 errors and a .989 fielding percentage.

In the end, it didn’t matter.

Acuña, playing for the first time since Sept. 24 after resting a sore left hip, may have cost the Braves an important run in the seventh by hot-dogging on a towering drive down the right-field line.

Apparently thinking it was a homer, the 21-year-old slugger jogged halfway to first carrying his bat before seeing the ball bounce off the wall. He wound up with only a single _ a reminder of a similar play in August which led manager Brian Snitker to yank the youngster out of a game against the Dodgers.

“He should have been on second,” Snitker said. “We’re kind of short-handed to do anything about it right there.”

Acuña eventually made it to second on a groundout, only to get doubled off on Josh Donaldson’s liner to end the inning.

Cardinals: RHP Michael Wacha (right shoulder tightness) was left off the postseason roster, but manager Mike Shildt said he’s ”moving forward” in hopes of being available later in the postseason should St. Louis advance. Wacha is expected to play catch soon before possibly advancing to a light bullpen session.

Braves: RHP Chris Martin left without throwing a pitch in the eighth after reporting tightness in his left oblique while warming up. The Braves were forced to call in Luke Jackson, who was greeted with Goldschmidt’s homer and would up being charged with both runs that inning. “We had the whole thing set up right where we wanted it,” Snitker said. “That was a big blow.” Atlanta could replace Martin on the roster before Game 2, but he would have to sit out the rest of the series as well as the NL Championship Series should the Braves advance.

Atlanta will counter with Foltynewicz, who also finished strong in a definite tale of two seasons. The 2018 All-Star was demoted to Triple-A in June with a 2-5 record and 6.37 ERA. Since rejoining the rotation in early August, he is 6-1 with a 2.65 ERA, claiming the second spot in the postseason rotation.