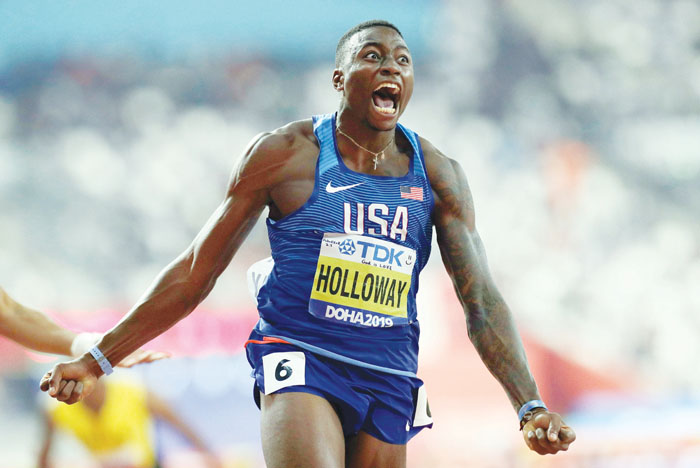 Grant Holloway, of the United States celebrates as he wins the gold medal in the men's 110 meter hurdles final at the World Athletics Championships in Doha, Qatar, Wednesday, Oct. 2, 2019. (AP Photo/Petr David Josek)

DOHA, Qatar (AP) — Most of the prime contenders in the women’s 200 had dropped out before the race even began. In the men’s 110 hurdles, the favorites waited to start tumbling until they neared the finish line.

Dina Asher-Smith took the easier road Wednesday to become Britain’s first female sprint world champion, while Grant Holloway outran the demolition derby to his left to become only the sixth man to capture NCAA and world titles in the same year.

“Those barriers don’t care about your body,” Holloway said. “They’re there to slow you down. Our goal is to go full-fledged over all 10 of them.”

Some of the biggest hurdles facing Asher-Smith on her quest to make history in her home country had disappeared before her race even began. The 200 field was missing 100 champion Shelly-Ann Fraser-Pryce (tired), two-time defending champion Dafne Schippers (injured), Olympic titlist Elaine Thompson (injured), and the 2019 world leader, Shaunae Miller-Uibo (running the 400), just to name a few.

When the eight-woman final was finally set, Asher-Smith found herself listed as a 1-10 favorite at some of the sports books back home, where they always pay close attention to their track stars.

All of which made this feel like anything but a breeze.

“Normally I’m quite chatty and full of energy, but it’s a different thing with everyone saying you’re the favorite,” she said. “You’re only the favorite if you go out and perform how people expect you to.”

Using her trademark fast start, Asher-Smith blasted out of the blocks in Lane 7 and was moving past the outside runners and into a three-step lead at the 150-meter mark. The rest was just a matter of time. Asher-Smith’s 21.88 _ good for a .34-second margin over America’s Brittany Brown _ established a British national record, just as her 10.83 did three nights earlier in the 100, when she finished second to Fraser-Pryce.

Asher-Smith joined Linford Christie (1993) as only the second British runner to win a sprint at world championships.

How big a deal was this? Well, it actually got loud for a minute after Asher-Smith crossed the finish line at the half-full Khalifa International Stadium. A few pockets in the British contingent waved the Union Jack, clanged cowbells and went crazy in the air-conditioned venue that had sounded more like a library only minutes before, while Poland’s Pawel Fajdek was wrapping up his fourth straight world hammer throw gold.

It will certainly be louder a year from now at the Tokyo Olympics, where expectations will be higher, and the field will almost certainly be deeper. Asher-Smith is already looking ahead.

“Still getting stronger, still learning a lot more physically and mentally,” she said. “So, hopefully, there’s a lot more to come.”

If Asher-Smith’s race was expected, then Holloway’s victory was … NASCAR?

While Holloway was in Lane 6 vying for the lead with Sergey Shubenkov, defending champion Omar McLeod was barreling down Lane 4 with his necklace in his mouth, racing next to 2016 Olympic silver medalist Orlando Ortega.

McLeod clipped the eighth barrier, then the ninth, then completely bit it after the 10th. But as he was warbling, his arm flailed in front of Ortega, who was closing in Lane 5, and slowed down the Spaniard’s late charge to keep him out of the medals.

Early on Thursday morning, Spain filed an appeal, asking for a re-run of the race, or for Ortega to be allowed to compete alone to see where his time would place him _ or for him to receive a bronze medal.

And life couldn’t be much better for Holloway, who looked semi-shocked when he crossed the line ahead of Shubenkov, then did what any good University of Florida athlete would do: the Gator chomp.

Holloway joined, among others, triple jumper Christian Taylor and 400-meter Olympic champion Kirani James as winners of the NCAA-worlds double.

“I didn’t see it but I heard a lot of them _ bang, boom, boom,” bronze medalist Pascal Martinot-Lagarde said. “I just stayed on my line and ran my race.”

So did Holloway, who still had the American flag draped around his neck two hours after the race.

He was a two-sport star in high school, and could’ve just as easily have played football as run track.

Chances are, he will be. As of Wednesday, he’s a track and field world champion _ even if the race that made him one looked more like a football game.