‘Shakespeare in Love’ provides inspiration to the bard 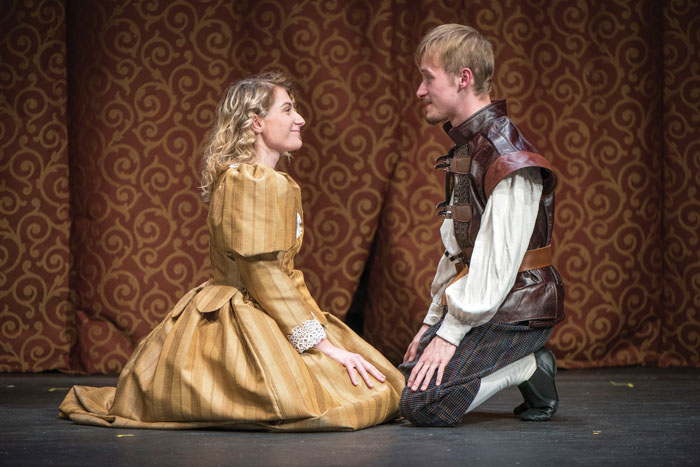 When Shakespeare has writer’s block, what is he supposed to do?

That’s what “Shakespeare in Love” is about, and it’s Piedmont Players’ first show of the season, adapted from the movie starring Gwyneth Paltrow and Joseph Fiennes.

Robert Parks fully realizes the role of Will Shakespeare, playing the bard with aplomb, yearning, sincerity and a more-than-passable British accent. A Catawba College student, his training as an actor shows as he embraces the part.

Though he has but a brief time on stage, Logan Funderburk does very well as Kit Marlowe, or Christopher Marlowe, the great tragedian. Theories abound about who Shakespeare was, and it was long rumored that Marlowe wrote Shakespeare’s plays after staging his own death.

That’s important to know going in, so you will understand what’s happening.

Jordan Leigh Dover, as Viola de Lesseps, steals Shakespeare’s heart and inspires his play “Romeo and Juliet,” at least in this story. Dover has a little fire and fierceness, if she would speak a bit more clearly. Viola is a woman who wants to act — something that can get the entire cast arrested in Elizabethan England, so she must disguise herself.

As with many Shakespearean works, mistaken identity plays a part in this play about the greatest dramatist of all time. And, as in many comedies, there are blustering villains, mouthy actors and conflict after conflict to separate the people in love.

Marc Anderson is loud and demanding as Richard Burbage, the English actor who played leading roles in many a Shakespeare creation. He also owns a theater and is jealously seeking the newest play. Will has promised a comedy, but the working title of “Romeo and Ethel, the Pirate’s Daughter” leaves something to be desired.

While Burbage wants a play, so does Philip Henslowe, another real character from Shakespeare’s time who was a theatrical entrepreneur. He needs to raise money, and fast, lest he be done away with by Mr. Fennyman, to whom he owes money.

The ever dependable Shawn Van Wallendael is the hapless and demanding Henslowe, and the giant Aaron Trusky is Mr. Fennyman, a theater producer and an imposing presence, indeed.

Other familiar faces to Salisbury theatergoers include Big Joe McGee as the father of young Viola and the actor Wabash. The handsome Jonathan Leach plays the dastardly Wessex, who has bought Viola as his bride in a deal with her father for tobacco in Virginia. He’s loud, obnoxious and unpleasant, and a threat to the young lovers.

Lori Van Wallendael wears the most gorgeous costumes, thanks to Ashley Ward of Eastern Costume Co., as Queen Elizabeth, who likes dogs in plays. Corinne Mauldin is strong as the Nurse, Viola’s caretaker, much in the way of the nurse in what turns out to be “Romeo and Juliet.”

Some problems with the sound system on preview night garbled some of the lines or ate them completely. Technical glitches should have been worked out by Thursday night’s opening.

It’s a huge cast, with men, of course, as all the actors in Will’s play. The action takes us through Will’s struggles writing the play, and the struggles of the various theater owners and actors who know Will’s plays are sure hits.

Will writes some of his best stuff when inspired by Viola, lines that are familiar, indeed, from “Romeo and Juliet.” Will Viola be discovered as actor Thomas Kent? Will her demanding husband-to-be expose her (in more ways than one)? Will her dream to be on stage ever be realized?

Many tense moments ensue, with actors backstage and onstage and the annoying chamberlain threatening to arrest everyone.

Will Will’s true love will out? That is the question.

For an evening of Shakespeare lite, try “Shakespeare in Love,” which opened Thursday night at the Meroney Theatre in downtown Salisbury. Performances will continue at 7:30 p.m. Friday and Saturday and Oct. 9-12 and 2:30 p.m. Sunday.

The show’s producer is Eric Slipp.