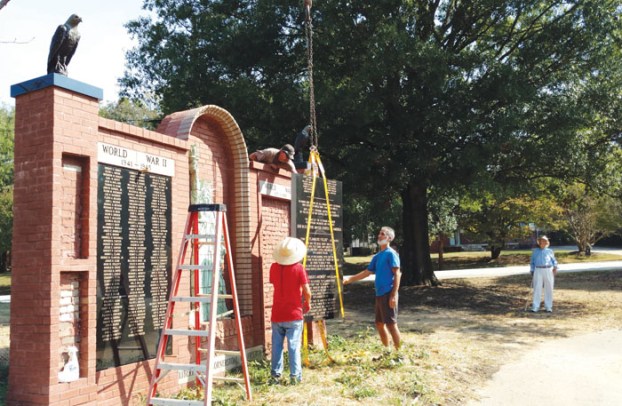 The etched black granite panel with names of Rowan County men who died in World War I is moved into place Wednesday morning by Dewain Vincent, top, Bobby Gaulden, left, and John Badgio. At far right, Reid Leonard watches the progress. Leonard has been a Rotary Club member closely involved with the Patriots Flag Concourse and Memorial since its dedication in 2012. Mark Wineka/Salisbury Post

‘One of the greatest days of my life’: Panels arrive for Vietnam, World War memorials at City Park

SALISBURY — Panels carrying the names of Rowan County men killed in World War I, World War II and the Vietnam War were installed Wednesday within their brick-sculpted homes.

The memorials stand along the path that’s part of the Patriots Flag Concourse and Memorial, located on the northeastern end of City Park.

Wednesday’s installation was a solemn chore, of course, but a happy one, too, for all the people who have waited months — years, really — for the black granite panels to arrive.

He hugged the four installers, Stephen Brown of the city and brick mason Donald “Duck” Morton on Wednesday morning as the Vietnam panels were set into a brick frame, the top of which still has to be completed.

Smith said the moment brought him to tears, too.

“This is one of the greatest days of my life,” he said. “After nine years of hard work, we’re finally, finally seeing the finished product. I am just thrilled to death and looking forward to dedicating the memorial on Veterans Day.

“That will be a great day in Rowan County.”

Reid Leonard and Brown stopped shy of saying a formal dedication will take place on Veterans Day. Leonard noted that LED lighting has to be installed, along with more brick pavers and landscaping.

“The sculptor has some touch-ups to do, too,”  Leonard said.

Leonard, a Salisbury Rotarian and former Parks and Recreation Board member, has helped guide the Patriots Flag Concourse and Memorial from the start. The Salisbury Rotary Club and the city dedicated the project in 2012.

A four-man crew from Gaulden Monuments & Crane in Rock Hill — Bobby Gaulden, Dewain Vincent, John Badgio and Jacob Ellis — used a crane and their muscle to guide the panels into place Wednesday.

The Gaulden company brought 10 etched and polished pieces in all — seven for the “Liberty” memorial, which is dedicated to both World War I and World War II, and three panels for the Rowan County Vietnam Veterans Memorial.

The three panels for the Vietnam memorial include the names of 40 Rowan Countians who died in the war; war action scenes; the emblems for military branches, POW-MIA and Vietnam Veterans of America; and a quote by President Ronald Reagan when he dedicated the National Vietnam Memorial in Washington.

“And just as they whom we commemorate were willing to sacrifice, so too must we, in a less final, less heroic way, be willing to give of ourselves,” Reagan said.

Mention also is made of the memorial’s being made possible by the Military Officers Association and the Wilson L. Smith Family Foundation, with an extra dedication to all Rowan County veterans.

“It is more magnificent than I ever dreamed it would be,” Smith said. “My dream has come true. I’m as excited as can be.”

It was Leonard’s idea to include passages from “In Flanders Fields” by John McRae and “America’s Answer” by R.W. Lilliard on the World War I panel because the list of names was so much shorter.

The memorial for World War I and World War II includes the Statue of Liberty in the middle and two bald eagles standing watch on top at opposite ends. The words “Liberty — the Cornerstone of Freedom” are etched into the stone.

A granite panel on the back of the Liberty memorial lists all of this piece’s benefactors.

On the front are four smaller black granite panels. The Clement and Whittington families paid for the bald eagles. One of the narrow panels under an eagle honors Donald Clement Sr., a World War I veteran, and his son, Donald Jr., who fought in World War II.

Under the second eagle is a memorial tribute to John J. Whittington Jr., who was part of the D-Day invasion on Normandy Beach during World War II.

One of the other two panels honors five women who made significant contributions to the community. The second includes lines from “America the Beautiful” — another idea of Leonard’s.

Contributions in their memory paid for the Statue of Liberty sculpture in the middle of the World War I-World War II piece.

Brick mason Morton and his assistant, Rocky Donaldson, worked off scaffolding Wednesday around the Vietnam memorial, still framing it in. Morton has laid all the thousands of donated bricks that are part of the concourse project.

Granite caps also are coming for the Vietnam memorial.

Smith, who flew missions in Vietnam, also was stationed for a time at Dover (Delaware) Air Force Base, which served as the East Coast mortuary for military personnel killed in the war.

Smith escorted the body of his friend, Forrest Hollifield, back to Salisbury from Dover.

“Forty names,” Smith said. “Many of them are my dear classmates and friends, and they will be memorialized forever for their sacrifice in the Vietnam War.”

The Vietnam memorial for Rowan County actually shows a “2017” dedication date. That’s when Smith originally hoped to have one in place. He said the granite panels have been sitting in a warehouse in South Carolina for three years, waiting for Wednesday.

“They will always be remembered now,” Smith said.

SALISBURY — The October issue of Salisbury the Magazine, a publication of the Salisbury Post, has reached subscribers and is available... read more