High school volleyball: South’s Kira Rymer is well-rounded, on and off the court 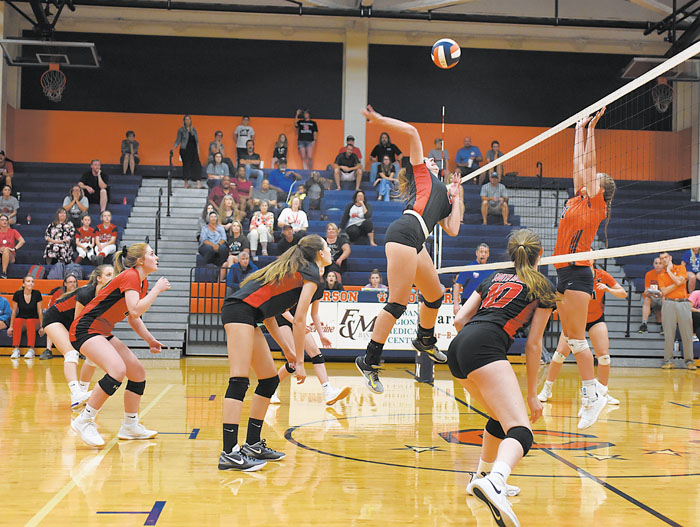 Wayne Hinshaw/for the Salisbury Post ... South Rowan’s Kira Rymer (13), center, goes high on attack during a match against Carson, on Sept. 9. Rymer has helped lead the Raiders to a 17-1 start this season, 14-0 in the Central Carolina Conference.

LANDIS — At a recent South Rowan pep rally, one of the things on the agenda was recognizing senior volleyball star Kira Rymer for 1,000 career kills.

There have been numerous smiles for South volleyball since it moved to 2A three seasons ago. South is 57-15 overall the last three seasons and 44-5 in league play in the 2A Central Carolina Conference.

“People assume South is going to lose in sports, but that isn’t reality,” the 5-foot-11 Rymer said. “Our boys cross country team is winning championships. Our track teams were good last spring. Our boys soccer team is winning.”

And then there’s volleyball. South (16-1, 13-0) is ranked sixth in 2A by MaxPreps and has lost only to West Rowan, the top-ranked team in 3A. Relative to the state as a whole, volleyball is probably the sport Rowan County is best in right now.

South tied for the CCC championship last year — the first regular-season title the school has ever won in volleyball — and has a great chance to win an outright title this year. South might even run the table — that’s 18 matches — in the CCC.

“That’s definitely a goal,” Rymer said. “We tied for first last year (with West Davidson and Ledford), but it would mean a lot more to win it by ourselves.”

It would also be hard to be more well-rounded than Rymer is off the court. She’s won contests as a writer and as a singer.

As far as school, she likes math and English best, but she’s good even in the subjects she doesn’t like. She’s currently No. 1 in South’s senior class.

“I’ve taught her in AP Stats, one of our higher level math courses,” Horne said. “She’s a conscientious student, just a great student. She might laugh out loud out of the blue, but that’s because she’s enjoying herself so much.”

Rymer started playing volleyball in sixth grade. Her uncle (Barry Rymer) was really into the sport, and he was getting his daughter, Anna, involved.

She stayed with it.

Her freshman season at South, the Raiders needed a setter. She handled the job and had 457 assists.

She was getting into club volleyball by then. As a sophomore in 2017, Horne switched Rymer to a hitting role.

“Well, we had a setter, we needed hitters and I was one of the taller girls,” Rymer said.  “I said I’d try it.”

She turned out to be a powerful, accurate hitter once she was unleashed. She had 364 kills that season and teamed with bouncy basketball star Janiya Downs to make South a surprise contender in the CCC.

In 2018, South took another step. The Raiders not only had Downs leaping around, they had added skilled Anna Rymer to the mix. Horne used both Rymers in the combination role of hitter/setter. The Rymers played opposite one another, and the one on the front row set.

“What we’re asking the Rymers to do is a little unusual, but if we ran a traditional rotation, our best hitter or our best setter comes out of the game,” Horne said. ” In my experience, you see what works and you do what works for you. This has been working for us.”

This season, even without Downs’ special brand of athleticism, South has continued to prosper. Both Rymers are killing, setting and digging like crazy and are among the county’s elite players. South’s defenders, led by Payton Black, have improved by leaps and bounds.

“We’re seeing a lot of very encouraging things with our program,” Horne said. “Kira is a really good leader for us because she’s determined to do everything right. She’s coachable, one of those people that takes everything you work on in practice into the matches.”

South won at Carson this year, a program it had not beaten since 2008. Carson has been  a consistently forceful team under coach Kelan Rogers, so that was a major step forward for the Raiders. In some ways, that win was bigger than any of this season’s long string of CCC conquests.

“In the Carson match, we showed ourselves how good we can be when we all want to win badly,” Kira Rymer said. “That was huge for our confidence.”

Even in the loss to West, South showed something. Kira was so dominant early that West changed its game plan. West resorted to triple-blocking Kira and made it work, but there aren’t many teams that will have a trio of girls who can get high enough to affect Rymer’s swings.

Rymer is athletic. Competing in track and field last spring, she was a factor in meets in the jumps and throws and placed seventh in the discus in the 2A Midwest Regional.

She definitely wants to make volleyball (and possibly track) part of her college experience.

At larger schools, she would be exclusively a setter, but she would prefer to find the perfect academic fit at a small school where she would have a chance to perform multiple roles for the volleyball team.

She’s been taking weekend trips to colleges with her uncle and cousin, looking for that place where she can set and kill — and dance and laugh.

“I’m not sure what the next step in life is going to be for her,” Horne said. “I do know she’s ready to take it.”