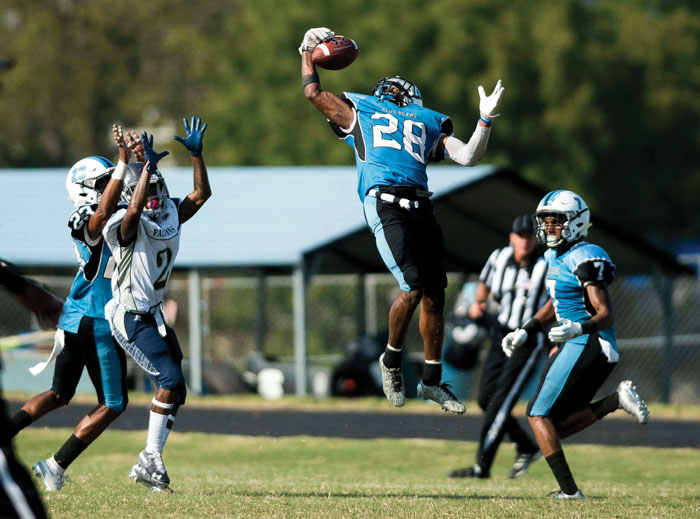 JON C. LAKEY FILE PHOTO/ SALISBURY POST ... In this photo from last year, Livingstone safety Walter Watkins (28) breaks up a pass, during a game against St. Augustine’s, at Alumni Memorial Stadium. Watkins and his teammates go for their fifth straight win on Saturday, hosting Virginia Union.

SALISBURY — In this day and age of pass-happy football, Livingstone safety Walter Watkins is just the kind of player you need in the secondary.

The junior from Jacksonville, Fla., is a three-year starter and a leader on the Blue Bears’ defense.  He and his teammates are 4-0 this season and face their stiffest test to date on Saturday, hosting Virginia Union at 1 p.m.

Watkins, who was third on the team with 42 tackles as a freshman in 2017, now totals 74 career stops and five interceptions. He knows what he’s doing.

“As a freshman, I adjusted to the system here very quickly,” said Watkins. ” In high school, we ran a 3-3-5, which is similar to the 4-2-5 here. I’ve always played the overhang position, so sticking slots and playing in space, I was used to that.

“My strength is communicating, putting people in position to where they may make a play instead of me,” continued Watkins. “I see the play, sometimes before it completely develops. I even like to know what the assignments are for the defensive line and linebackers. I like to know what everybody is doing. You may see me creep in and look like a linebacker, but I’m just communicating with everyone.”

Watkins was an all-conference and all-district defensive back at Jacksonville’s Raines High School in 2016. He knew all along that he wanted to play DB in college.

“Some like playing both ways in high school, but I just played defense,” remembers Watkins. “I knew that colleges were not looking for two-way players. They want someone who can dominate his position, so I wanted to be a very good defensive back and I worked on it.”

Watkins’ personal trainer in high school is a friend of Livingstone defensive coordinator Rodney Hughey. That friendship led to the recruitment of Watkins.

“I ended up here and I’m glad,” said Watkins, who grew up a fan of Florida, Florida State and Miami. “Certain things happen for a reason.”

“It’s been fun,” said Watkins, a solid 5-10, 170-pounder. “The best thing is I’ve played with the same guys since I’ve been here. People may think that we’ve got new guys, but it’s really guys who’ve been here. We’ve been bought in the whole time, but we were just young. You have to grow up  and mature as a player and a person.

“The game does slow down for you as your gain experience,” added Watkins. “We’ve slowed it down, play by play, and made adjustments. We know what to do. It’s time to do it. We’ve been together a while now and know each other’s strengths. We just have to execute.”

Livingstone coach Daryl Williams says that Watkins and the secondary have been a key component of the team’s fast start this season.

“Walter’s a good leader,” Williams said. “He was one of more experienced players coming back on the defense. He takes coaching real well and does everything you ask. He’s a sure tackler and is always positive. He’s part of a defensive backfield that, collectively, is doing a real good job.”

Watkins is majoring in criminal justice at Livingstone. A goal is to become a DEA agent in Florida. “I want to be one of those special agents, so when it’s a big task, I’ll be the one they call,” says Watkins.

Both of Watkins’ parents are in his life — his mother, Shaunderia Daniels, and father, Walter Watkins Sr. They live and work in Jacksonville but travel to watch their son play almost every week.

Last week, in the 35-19 win over Lincoln (Pa.), Livingstone played error-free as far as turnovers, but it did have a punt blocked for a touchdown and committed 14 penalties for 122 yards.

“I was thrilled with the no turnovers, but we’ve got to clean up those other mistakes,” said Williams. “You won’t beat many good teams with that many penalties.”

This week, the Blue Bears face a Virginia Union team that received votes in the NCAA D2 national poll. The Panthers are 3-1, having lost to 8th-ranked Lenoir-Rhyne, 28-11, on Sept. 14, but opened the season with a surprising, 36-17 win over Division I Hampton University.

“Virginia Union was picked to win the Northern Division and picked to win the conference,” said Williams. “But we’ll show up and see what happens. I’m curious to see how our team responds to playing a very good team. Last year, we were out-coached and out-played in all three phases of the game at their place, so I think we’ve taken it personally and will be ready on Saturday.”

Livingstone is in the CIAA’s Southern Division, so the game is a “cross-rival” game, but it still counts in the conference standings. But Williams doesn’t want his team to lose sight of the fact that it’s only one game.

“We’re not going to make it any more than it is,” said Williams. “It’s still just a football game. We going to prepare, to be the best we can be, and control the things that we can control.”