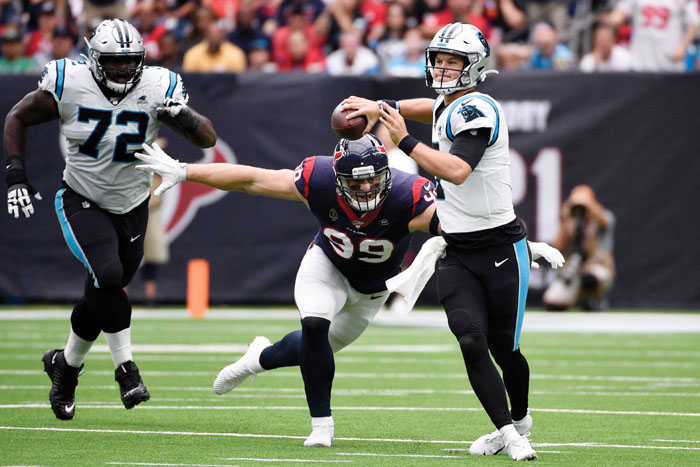 The second-year quarterback realizes for that trend to continue he must do a better job of protecting the football.

Allen is 2-0 as a starter since replacing the injured Cam Newton, but his fumbling issues are concerning. He has fumbled five times in the last two games, turning it over four times. Yet the Panthers (2-2) have managed to beat Arizona and Houston on the road despite those potential costly miscues.

But Allen knows that’s not a sustainable winning formula in the NFL.

“For me it’s unacceptable, and I can’t put the team in a position like that if we want to win games,” said Allen, who has fumbled on the opening drive of both starts this season. “So I take that to hear and I’m working to get better.”

While Allen said ball security has been an emphasis with the coaching staff this week in practice, he refused to get into too many specifics about what exactly he’s doing to correct the issue.

But he did say stepping up in the pocket and doing a better job of sensing pressure is one of the things he can do to help himself.

After his third fumble against Houston last week, Allen seemed to figure things out when he ducked under defensive end JJ Watt late in the game and completed a critical third-down pass to Jarius Wright to move the chains and help the Panthers hold off the Texans 16-10.

“Sometimes I’m too deep in the pocket and sometimes it’s rolling out left or right,” Allen said. “It’s a combination of things.”

“He’s aware of it,” coach Ron Rivera said of the issue. “It’s a couple of things that happen in the game that you have to give credit to the guy rushing him as well. JJ Watt is a pretty spectacular guy who made a pretty doggone big-time play.”

Despite the fumbles, Allen has quickly won fans over in the Carolinas because he’s done what Newton hasn’t _ win.

The season looked dire after the Panthers started the season with back-to-back losses at home and Newton was ruled out with a foot injury prior to the Week 3 game at Arizona. But the Panthers rallied behind Allen’s four-touchdown performance and the versatile play of Christian McCaffrey to beat the Cardinals 38-20 and salvage a floundering start.

Newton said Friday night on a video blog that he needs to “take time away” from the game to allowing his mid-foot sprain to heal because it has prevented him from playing at a high level.

Rivera has said when Newton is healthy he will start.

Allen doesn’t know when that will be.

So Allen will look to become the first NFL quarterback since Kurt Warner to win his first four NFL starts _ he also won in Week 17 last year _ when the Panthers host rookie quarterback Gardner Minshew and the Jaguars (2-2) on Sunday in a battle between two 1995 NFL expansion teams.

Allen will be without one of his options in the passing game, as the Panthers on Wednesday placed wide receiver Chris Hogan on injured reserve with a left knee injury and claimed offensive lineman Caleb Benenoch from New England off waivers. Hogan had three receptions for 24 yards this season.

“Chris will undergo an arthroscopic procedure and will be placed on injured reserve,” general manager Marty Hurney said. “He will be a candidate to return later this season under the 8-game rule.”

The 6-foot-3, 210-pound Allen said despite his recent success he still doesn’t get recognized by Panthers fans when he’s out and about in downtown Charlotte, North Carolina.

“No, I’m pretty unnoticeable. I look like a lot like the rest of the people in this (media interview) room,” Allen said with a laugh.