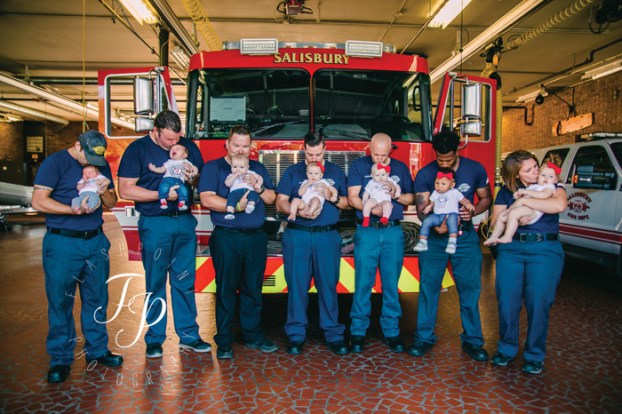 In a second photo shoot, photographer Brianna Mitschele captured the parents with their babies, one of whom, far left, is 3 days old in the picture. Photo by Brianna Mitschele/Flash Point Photography

SALISBURY — By now, the group of Salisbury firefighters, their spouses and significant others have heard all the jokes — there must be something in the water or they’ve been drinking some special kind of Kool-Aid.

Nine babies have been born to firefighters this year.

But wait, there’s more: Three more, to be exact. Three little ones will join the troop in January, March and April.

The story of the expanding fire families, which started with a March photo shoot of the pregnant moms-to-be, has gone viral and been shared globally. The photos were taken by local photographer and former firefighter Brianna Mitschele.

Mitschele herself is expecting her first child with her boyfriend, Dustin Glisson, in April.

In the spring, Mitschele gathered seven of the original nine pregnant women at Salisbury Fire Station No. 1. A week ago, she gathered some of the women and fathers with their little ones. The second photo shoot featured some of the babies whose mothers were in the original shoot. The youngest baby at the time was just 3 days old.

The story of how the women became pregnant within the same year has spread to a feature on “Good Morning America” and in the Daily Mail British newspaper, and now there’s an opportunity to be featured on “The Kelly Clarkson Show.” In addition, a book is planned by a labor and delivery nurse featuring some of the moms’ birth stories.

Cline and her husband, Jeremy, welcomed daughter Cara, who was the fourth born in the group.

It’s different for the Clines, who have an 8-year-old. They are adjusting to being a family with two children.

“You never think your life is interesting enough,” she said of the buzz.

She’s happy that they’ve all been able to share their individual stories.

“Hopefully, others can relate,” she said.

“We’re just wondering who’s next,” joked dad and fire engineer Michael Freeman, who participated in the second photo shoot with his daughter, Harleigh.

Some of the babies were born rather close, in some cases within a day of one another.

Camaraderie is well-known among the firefighters themselves, but it has spread to their spouses, who have a built-in support system and a common bond.

Freeman, who is a first-time parent, said having a child reminds him to be that much safer while on a fire call, “because at the end of the day, we all want to sse our babies grow up.”

Mitschele said people who didn’t know she took the photos have asked if she’d heard the story of the fire station with nine babies.

While the first shoot took half an hour, the second involved the babies, mothers and fathers.

“It’s harder to get 21 people together,” Mitschele said.

Bridgett Roseman said she did not expect the photos and story to “get this big and for it to go overseas. It’s crazy.”

She and fiance Aaron Blackwelder weren’t trying to have a baby and had even experienced a miscarriage, so Roseman was initially a little worried.

The first-time mother is excited at the prospect of continuing to share her story alongside the other women.

“It’s been, honestly, a once-in-a-lifetime type of thing,” Roseman said.

Firefighter Lauran McCulloh also appreciated the opportunity to tell the birth story of not only her newborn daughter, Carolyne, but her two other children — all of whom she calls miracles. The McCullohs have a 6-year-old and 3-year-old.

McCulloh and her husband, Jon, went through three miscarriages in between the births of their three children.

She had infertility problems and problems sustaining the pregnancies. Doctors told her she should quit her “high-stress” job, but she said faith brought the couple through.

“I was told I couldn’t have kids by myself,” she said.

McCulloh became pregnant each time without a doctor’s intervention, but she did undergo hormone replacement.

“I’m all about giving my testimony. All three of them are miracle babies,” she said.

The families are as follows:

• Brantley and Katie Shanks, baby due.

For more information about the babies and the photo shoot that brought them together, visit Flash Point Photography at http://www.bmflashpoint.com/blog/they-have-arrived-the-future-salisbury-fire-dept-recruits.

SALISBURY — Lou Adkins has been fighting the mental health system for 30 years. It hasn’t been easy to find... read more