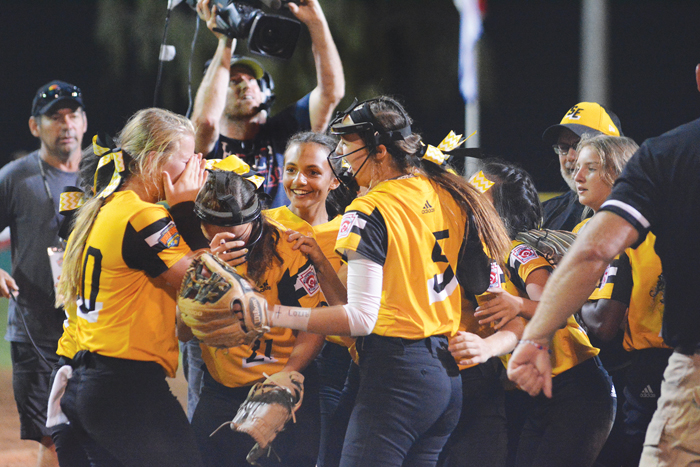 David Ball/Salisbury Post file photo ... Members of the Rowan Little League softball team celebrate winning the World Series on Aug. 14, in Portland, Ore. The team will be honored at the White House on Oct. 11.

SALISBURY — Rowan Little League’s softball world champions have a date in Washington — at the White House on Friday, Oct. 11.

The team won the Little League Softball World Series in Portland, Ore., on Aug. 14. The girls returned home to a victory parade in downtown Salisbury and a celebration at their home ballpark at Salisbury Community Park.

Steve Yang, the head coach of Rowan’s champions, noticed that a Little League baseball team from Louisiana won its World Series in Williamsport, Pa., on Aug. 25, and got an invitation to visit the White House from President Donald Trump — via Twitter.

So Yang sent out his own tweet: “President Trump, my name is Steve Yang and I am the head coach of Rowan LL in Salisbury, NC, that recently won the softball Little League World Series in Portland, Oregon. Wanting the team to get an invite to the White House like the boys team from Louisiana.”

Yang said that he was not expecting to get so much attention when he sent his tweet. It received 250 “retweets” and about 375 “likes.” It also received support from the community, and the media noticed it as well, he said.

Now, the date for visit has been confirmed.

Yang received an email on Tuesday morning from the White House liaison that he has been communicating with since August. School-wise, the Oct. 11 date works perfectly for the girls, as it falls on a teacher’s workday and there is no classes for students.

“Another neat thing is that the baseball team from Louisiana will be there at the same time, so we’ll get to meet them as well,” continued Yang.

According to Yang, county commissioners Greg Edds and Jim Greene will in the travel party, as well as Little League district administrator Vince Scanlon, and from the Rowan Little League, president Dan Wales, and Jeff and Lynn Bernhardt.

The group may be flying to Washington. Yang said that a parent who has air travel connections through his employment is working on securing a 50-passenger plane to transport the group. If that plans works out, the journey will be a day trip.

A back-up plan, according to Yang, would be a charter bus — going to Washington on Thursday afternoon, spending the night and returning late Friday afternoon.

Yang noted that the White House does not provide any travel expenses. He added that through social media, Wales has started a fund-raising effort for the trip.