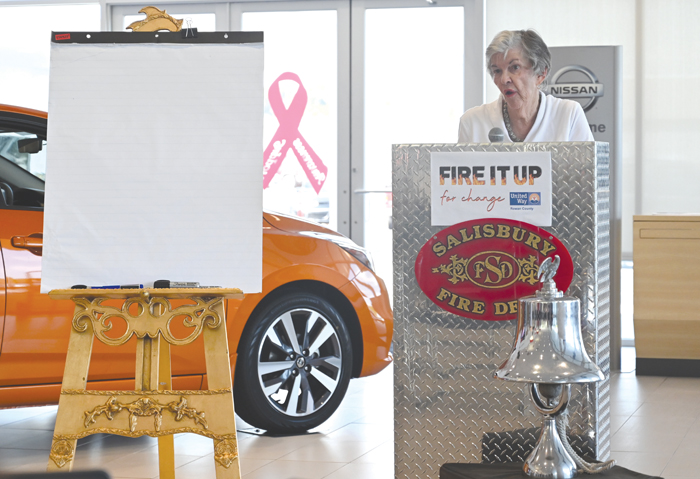 SALISBURY — Lou Adkins has been fighting the mental health system for 30 years.

It hasn’t been easy to find care for her son, who was diagnosed with bipolar or schizoaffective disorder at the age of 19. Services in Rowan County are limited to nonexistent, but she proudly said Wednesday that there will be services after this year’s Rowan County United Way fundraising campaign.

“I just can’t tell you the companies that have applied and how excited we are,” Adkins said during Wednesday’s campaign update. “We’ve got such good people that are applying, and we’re going to have services in Rowan County, finally. So, I am urging you to collect as much money as you possibly can. We’re going to need every penny to support all of these organizations.”

At present, mental health services are managed by Cardinal Innovations, which is responsible for Rowan and more than a dozen other counties. And for years, locals have complained that the organization has been unresponsive to their needs.

As Adkins described it, there was a “wonderful mental health clinic in Rowan County” before 2012. That was before the transition to Cardinal Innovations and when Piedmont Behavioral Healthcare served just several local counties, including Rowan, and provided direct services to clients.

“It had been here for years. There were great psychiatrists and social workers and all kinds of staff there,” she said. “But our state decided that some of the mental health clinics in the state weren’t very good, and they closed all of them. So, they closed our clinic and replaced them with (a managed care organization).

“If they’re managing that many counties, you can imagine how much support we get here in Rowan County.”

Adkins could guarantee that money raised in this year’s United Way campaign will go toward mental health services because of the agency’s new impact model, which will direct funding into four areas — mental health, substance abuse, healthy lifestyles and basic needs. Those areas were chosen based on a 2018 study of community needs.

So far, the 2019 campaign is at about 20% of its fundraising goal, which was $1,525,117 at the start of Wednesday’s update and $1,526,143 at the end. The campaign’s goal is increasing this year at each update meeting as calls for service for mental health and substance abuse increase.

Some individual sections of the campaign have made more progress than others. Industrial No. 2, for example, is already at 49% of its $74,000 goal, said Bob Cartner, of Chandler Concrete. Others reported that they are just getting started.

At Wednesday’s meeting, one middle school reported that it has already topped its fundraising total from last year.

Corriher-Lipe Middle School Assistant Principal April Williamson said her school finished its campaign, with a goal of $3,800, in two days. Incentives for the campaign include days when teachers could where jeans and “breaks,” when school administrators would teach classes for teachers.

David Post, responsible for fundraising among professionals, encouraged the attendees to ask their doctors, lawyers and accountants to give to the United Way. Post said they typically do not give to the campaign. And in letters he’s written to people in the professionals group, Post asked for a donation of $100.

“I know I’m preaching to the choir here, but the choir in this case visits the preachers,” Post said.