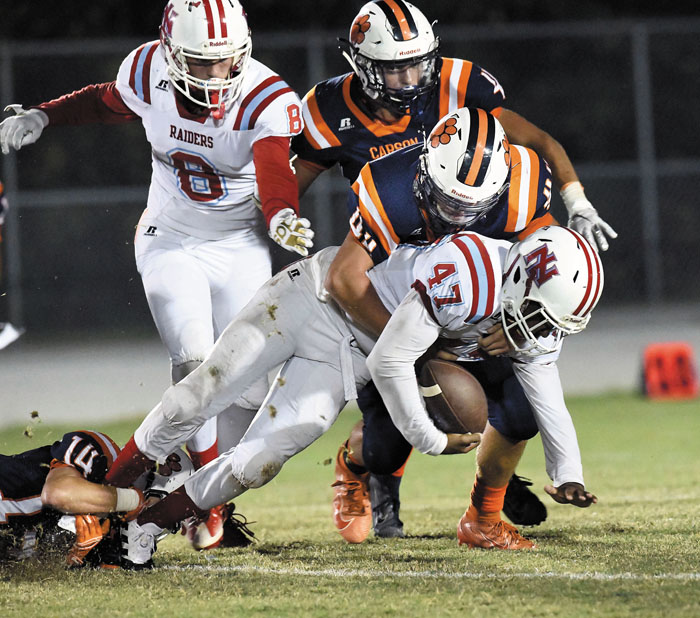 CHINA GROVE — Nothing is harder on a football coach than watching guys practice well all week — and still not seeing positive outcomes on game nights.

Through thick and thin — mostly thin — Carson has practiced hard and well just about every day this season, head coach Daniel Crosby said.

“Man, we needed it,” Crosby said. “This team has faced adversity really well, amazing well, so it was good to see all that effort in practice pay off.”

A leader for the Cougars in the classroom, the weight room, the practice field and on Fridays is 190-pound senior Robert Barringer.

Barringer entered the season as the most experienced Carson offensive lineman and figured to be a fixture at right tackle. The plan also was for him to be a backup on the defensive line, ready to step in whenever needed.

But then Carson had to revise Plan A.

And probably a few other plans, as injuries mounted.

Barringer’s roles have changed as teammates have gone down around him. Moving forward, it looks like he’ll be a two-way starter at right guard and linebacker.

Barringer had been hoping to get a chance at linebacker. With that strange Saturday morning game at North Stanly hopelessly lost, Barringer got his shot.

“I was in for four or five plays at North Stanly and I made four or five tackles,” Barringer said with a laugh. “At the beginning of last week, they told me I’d be starting at linebacker against North Iredell.”

He would also be shifting to right guard on offense because of an injury. Austin Cook, who had been playing tight end and linebacker on the jayvee team, was moved up to play right tackle.

“For a sophomore who’s been on the jayvees, he did really well,” Barringer said. “He did ask me what the play was a few times.”

Carson had an early touchdown against North Iredell erased by a penalty, but the Cougars weren’t deflated. CP Pyle, who has played safety most of the year, was getting a chance in the offensive backfield and he bolted through a gargantuan hole for the 62-yard touchdown that got the Cougars rolling.

When Pyle went down with a foot injury, Evan Johnston kept the Cougars rolling. Courtney got his first touchdown since the South game. QB Alex London got his first varsity rushing TD. Carson built a 28-0 lead in a game that had been looked at as a virtual toss-up.

“Obviously we were getting the holes for guys, but they also were breaking tackles,” Barringer said. “We’ve got to keep that going.”

Carson averaged 8.7 yards per carry against North Iredell and amsassed 271 rushing yards, even though the game was stopped by lightning when it was still in the third quarter.

“We had a lot of guys who had a hot hand running the ball, and Barringer graded out at 80-something percent on offense,” Crosby said. “He blew up some linebackers.”

Barringer’s impact on Carson’s defense may have been even greater. He brings confidence to whatever he does. He leads vocally, as well as by example. There was a void at linebacker because injuries have forced 180-pound Andrew Rollins to switch from linebacker to defensive end. Barringer filled that void.

“He brought a lot of energy to our defense,” Crosby said. “And he brought toughness. He’s a much more physical guy than people realize. We want all our guys to play with the physicality that he does.”

After falling in that 28-0 hole, North Iredell tried hard to get back in the game. A penalty-aided score late in the first half helped and a pick-six helped, and Carson’s lead was down to 35-14 when North Iredell threatened to score again in the third quarter.

North Iredell had third-and-goal at the Carson 3 when the Cougars decided to stop retreating. Rollins and linebacker Logan Rogers halted a 205-pound back for a loss of a yard.

There was a timeout before North Iredell ran its fourth-and-goal play. During that stoppage, Barringer showed why it’s a good idea to have his encouraging voice on defense.

“We had a defensive huddle, and I told our guys on the defensive line, that this was the most important play of the game,” Barringer said. “They score and they’ve got a lot of momentum. We stop them and we’re going to win.”

Carson got the stop.

A holding penalty kept Carson pinned deep in its territory, but as the Cougars were preparing to punt from their 8-yard line, lightning flashed with 2:03 left in the third quarter.

After a major delay, the decision was made not to try to resume at a late hour or to return to finish on Saturday.

So Carson got the win and was happy to get it under any circumstances.

“It had been a lull for us,” Barringer said. “But we got some things back.”

The beat-up Cougars won’t get to relax long.

They make the 8.5-mile trip to A.L. Brown this Friday, and while they’re all excited about playing on the new turf field at tradition-rich Memorial Stadium, they are well aware the Wonders (3-1), who won an amazing game against Davie that began Friday and ended Saturday, will be bigger, faster, deeper and healthier.