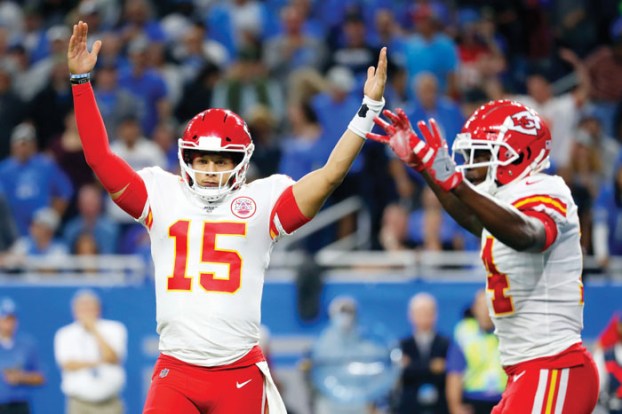 Kansas City Chiefs quarterback Patrick Mahomes (15) reacts after a touchdown during the first half of an NFL football game against the Detroit Lions, Sunday, Sept. 29, 2019, in Detroit. (AP Photo/Paul Sancya)

NEW YORK (AP) — It’s only four weeks into the NFL’s regular season and it seems like Tom Brady and Patrick Mahomes are way ahead of the rest of the AFC.

The New England Patriots and the Kansas City Chiefs, who met in last season’s AFC championship game, are both off to 4-0 starts.

New England received 10 of the 12 first-place votes for 382 points in balloting Tuesday by media members who regularly cover the NFL.

“Patrick Mahomes didn’t have his best stuff against the Lions, but the reigning MVP found his touch when it mattered most: on the game-winning drive,” Newsday’s Bob Glauber said.

The Patriots and Chiefs are the only AFC teams in the top nine in the poll. The surprising Buffalo Bills, who lost 16-10 to the Patriots last week, moved up a spot to round out the top 10.

The New Orleans Saints jumped four places to No. 3 after topping the Dallas Cowboys 12-10 on Sunday night. It was the Saints’ second consecutive victory without quarterback Drew Brees, who is out several weeks after thumb surgery.

“One of this season’s biggest surprises: The Saints’ defense is carrying the offense,” said Alex Marvez of Sirius XM.

The Cowboys remained at No. 4 and will host the Green Bay Packers on Sunday.

“Offense will bounce back,” Fox Sports’ John Czarnecki said of Dallas, which was held to 254 yards against New Orleans.

The Packers fell three spots to No. 8 after losing to the Philadelphia Eagles.

The Los Angeles Rams slipped two spots to No. 5 after losing a 55-40 slugfest to the Tampa Bay Buccaneers. The Rams will open Week 5 at the Seattle Seahawks on Thursday night.

“It’s hard to know what to think of this team,” Charean Williams of Pro Football Talk said of the Rams. “They need (running back) Todd Gurley to be Todd Gurley for their offense to operate as we’ve seen it in the past. (Coach) Sean McVay isn’t a miracle worker.”

The Seahawks climbed four spots to No. 6 after dominating the winless Arizona Cardinals 27-10.

Despite losing quarterback Mitchell Trubisky to a left shoulder injury, the Chicago Bears fended off the Minnesota Vikings 16-6 and rocketed seven spots to No. 7. The Bears will have Chase Daniel at QB when they face the Oakland Raiders in London before their bye week.

“When you allow an average of only 11 points per game, it may not matter much whether it’s Mitch Trubisky or Chase Daniel under center,” said Ira Kaufman of Fox 13 in Tampa, Florida.

The San Francisco 49ers, the NFC’s only unbeaten team, remained at No. 9 after their bye week. The 49ers will close Week 5 when they host the Cleveland Browns on Monday night.

Clock now ticking as California takes on the NCAA

By Tim Dahlberg AP Sports Columnist The state of California is ready to take the NCAA to school. And the... read more