Let your appliances do the work for you 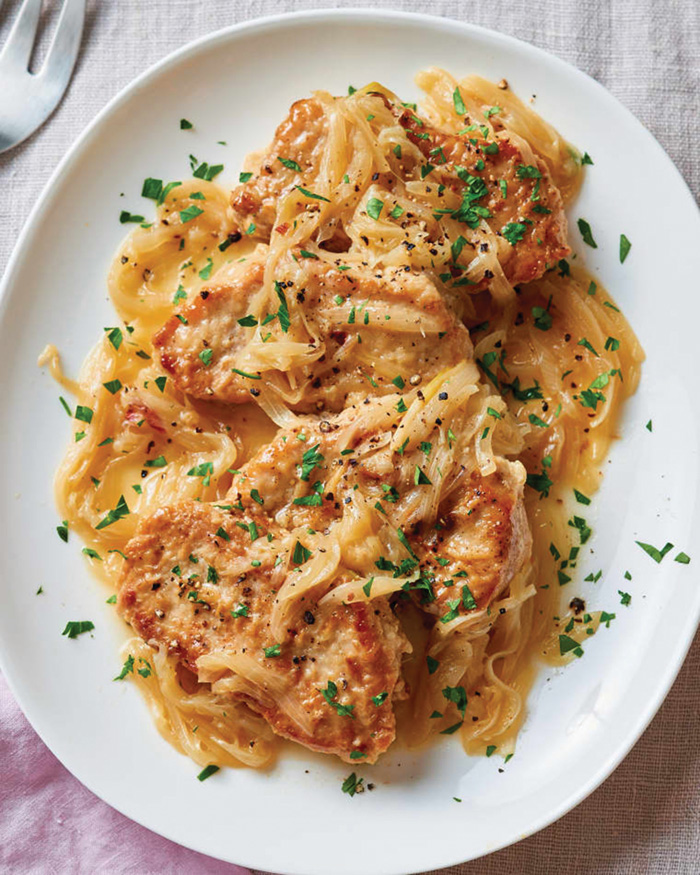 Love traditional smothered pork chops? You can do that in the Instant Pot, too.

We will ever get to the season of soups and stews, hot chocolate and apple pie?

It sure doesn’t seem like it, and I don’t know about you, but I’m sick of the same old “don’t-heat-up-the-kitchen” foods, and with the lack of rain, we’re even running low on fresh vegetables.

Pull out the slow cooker or Instant Pot, because they don’t heat up the kitchen, and you can set and forget most of these ideas, at least for a while.

Make use of what’s in the pantry and add a few fresh ingredients. Save the spicy chili for December, when we may break the heat wave.

I don’t have an Instant Pot, but I do have a slow cooker, a Dutch oven and a sauté pan. Lots and lots of people have Instant Pots now, and they want more than the standard recipes, so we found a few that seem fall-like, even if the weather does not.

This dish requires two-step cooking, so you might want to save it for a weekend, but it’s got protein, fiber and flavor.

Italian Chicken with Beans and Broccoli

Place the broth, rice, water, onion, garlic herbs, 1 tsp. salt and pepper flakes in a 5-quart or larger slow cooker and stir to combine. Spread the rice mixture out so it’s in an even layer and submerged in the liquid.

Season the chicken with salt and place in an even layer over the rice. Cover and cook on low for 3 hours.

Then add the beans and cheese and stir, then spread back into an even layer. Distribute the broccoli in an even layer and cook 1 to 1 1/2 hours more on low, until rice is tender. Serve topped with more Parmesan.

Measure the flour and place in a shallow dish, such as a pie pan; thinly slice the onions and cut the butter into two pieces.

Season the pork chops with salt and pepper, being sure to coat the sides, and press the chops into the flour to coat.

Set a 6- to 8-quart electric pressure cooker or Instant Pot to sauté and give it 10 minutes to preheat. Add half the butter, then add 2 of the pork chops and sear until browned, 2-3 minutes per side. Transfer browned chops to a clean plate. Repeat with the other 2 chops and the remaining butter.

Add onions and cook, scraping the bottom of the pan and stirring occasionally with a heatproof spatula, until they just begin to brown, 10 minutes.

Pour in the chicken broth and deglaze the pan, scraping up any brown bits. Once the broth has come to a simmer, add the pork chops and make sure they are covered with liquid. Cover and make sure the pressure valve is sealed. Set on manual, high pressure for 10 minutes cook time. It will take the pressure cooker 12-15 minutes to reach pressure.

Tun the pressure cooker off, uncover and let and chops and sauce cool for 10 minutes. The sauce will thicken as  it cools. Using tongs, transfer the chops to a platter. Add the sour cream or yogurt to the sauce and stir. Pour sauce over the chops.

In a large slow cooker or Instant Pot, mix the onion, carrot, celery and garlic. Season with salt and pepper.

Add the remaining ingredients and stir to combine.

Cook on low for 4-5 hours, or until lentils have softened and sauce is thick.

Check seasoning and serve over spaghetti or any shape cooked pasta.

Some people have said it takes the lentils longer than 5 hours to cook, and suggest a cook time of 7 hours, so it could be something to start in the morning before going off to work. Other recipes call for cooking the lentils on high for 4-6 hours, or for 8 hours on low. Eight hours on low seems to be the best option. Leftovers can be frozen and used as a soup, sauce or side dish.

Now this one is a mind-blower, cheesecake in an Instant Pot?  Yes, desserts work in the Instant Pot, too.

Spray a 7-inch springform pan lightly with cooking spray. Cut a piece of parchment paper to fit the bottom of the pan and spray again. Set aside.

In a large bowl, combine the cracker crumbs, butter and sugar. Press the mixture firmly into the bottom and up the sides of the prepared pan. Set aside.

In the bowl of your stand mixer, beat the cream cheese and sugar until combined and even. Add the sour cream and mix for 30 more seconds until smooth; add in the flour, salt and vanilla, scraping the sides of the bowl. Add the eggs and mix until just smooth.

Pour the cream cheese mixture into the prepared crust.

Next, place another piece of foil about 18 inches long folded into thirds lengthwise. Place this under the springform pan and use the two sides as a sling to place the cheesecake into the pot. It will also make it easy to remove the cheesecake from the pot.

Once the pan is in the pot, secure the lid and press the manual button. Adjust the pressure to high and set for 35 minutes, making sure the vent is loose. Let the cheesecake cool and allow the pressure to release naturally.

Remove the cheesecake from the pot and place on a wire rack to cook for an hour. Cover with foil and place in the refrigerator to chill at least 4 hours.

Several people who tried the recipe said there was water on top of their cheesecake from condensation in the Instant Pot. Lightly blot with a paper towel after the cheesecake has cooled for 1 hour.