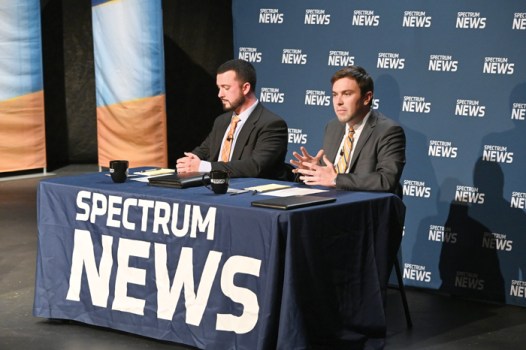 Jordan Roberts, right, of the John Locke Foundation speaks during a debate about health care at the Norvell Theatre on Tuesday. Next to him is Brendan Riley of the N.C. Justice Center. Josh Bergeron/Salisbury Post

SALISBURY — Medicaid expansion has kept the N.C. General Assembly in session months after the start of the fiscal year after a gubernatorial veto, but people on both sides of the aisle found health care issues on which they agreed Tuesday at the Norvell Theatre.

Points of debate ranged from telemedicine to Medicaid expansion.

And while there were predictable partisan disagreements, debate panelists found agreement on issues that include the price of prescription medicine and the need for an increase in telemedicine — where health care services are offered through devices like smartphones and computers at a person’s home.

“Hey, good policy is good policy,” Brawley said after panel members agreed on the importance of preventative medicine and cost of prescriptions.

Midway through the debate, Brawley listed a number of policy items worth pursuing, including being able to buy medical devices from Canada, allowing hearing aids to be sold in the same manner as eyeglasses and the importance of focusing on preventative care.

“A significant amount of health care goes into end of life care,” Brawley said. “We’ve got to concentrate more on preventative measures. … Just getting people to quit smoking has a huge health impact.”

Cunningham responded, saying Brawley is right about the need to focus on prevention.

“We find a lot of dialysis facilities have to open up in North Carolina because people are getting into kidney disease or getting an amputation because their diabetes is out of control,” she said.

And when Brawley said telemedicine would make health care easier, he found agreement from Cunningham, too.

How many heart patients could be checked regularly through software on a smartphone if that technology was expanded? Brawley asked.

Among other things, the panelists didn’t agree about Medicaid expansion and the Affordable Care Act.

Cunningham, for example, said expanding Medicaid would keep hospitals, especially small ones in rural areas, from closing. And Riley said people who are left out by the current coverage system or in the so-called “coverage gap” would gain health insurance through expansion. The coverage gap refers to people who are uninsured and make too much to participate in Medicaid and too little to qualify for tax subsidies to pay for a plan in the health care marketplace.

But Brawley said costs associated with Medicaid could become the largest item in the state budget if it were expanded. Already, it’s the second-largest, he said.

Cunningham and Riley quickly said the state is better off because of the Affordable Care Act, but Brawley and Roberts called the measure’s effect a “mixed bag.” The measure was enacted and signed into law by then-President Barack Obama in 2010. A goal of the measure was the reduce the number of people who are uninsured.

“Some North Carolinians certainly gained coverage through the Affordable Care Act, but a lot of people saw premiums skyrocket and they still don’t have coverage that they like,” Roberts argued.

Riley said that North Carolina is “undoubtedly better off” because of the Affordable Care act, but that states were supposed to expand Medicaid along with the bill, too. North Carolina’s insurance market is still suffering because of that, he said.

Tuesday’s debate won’t be the last hosted as part of what’s called the Hometown Debate series by Spectrum News and the Institute of Political Leadership. A debate about rural access to health care is schedule Oct. 8 in Greenville. Another about the delivery of medical services will be Oct. 27 in Henderson.